Learn all about what mise en scene is, and how to identify, analyse and write it in a paragraph! 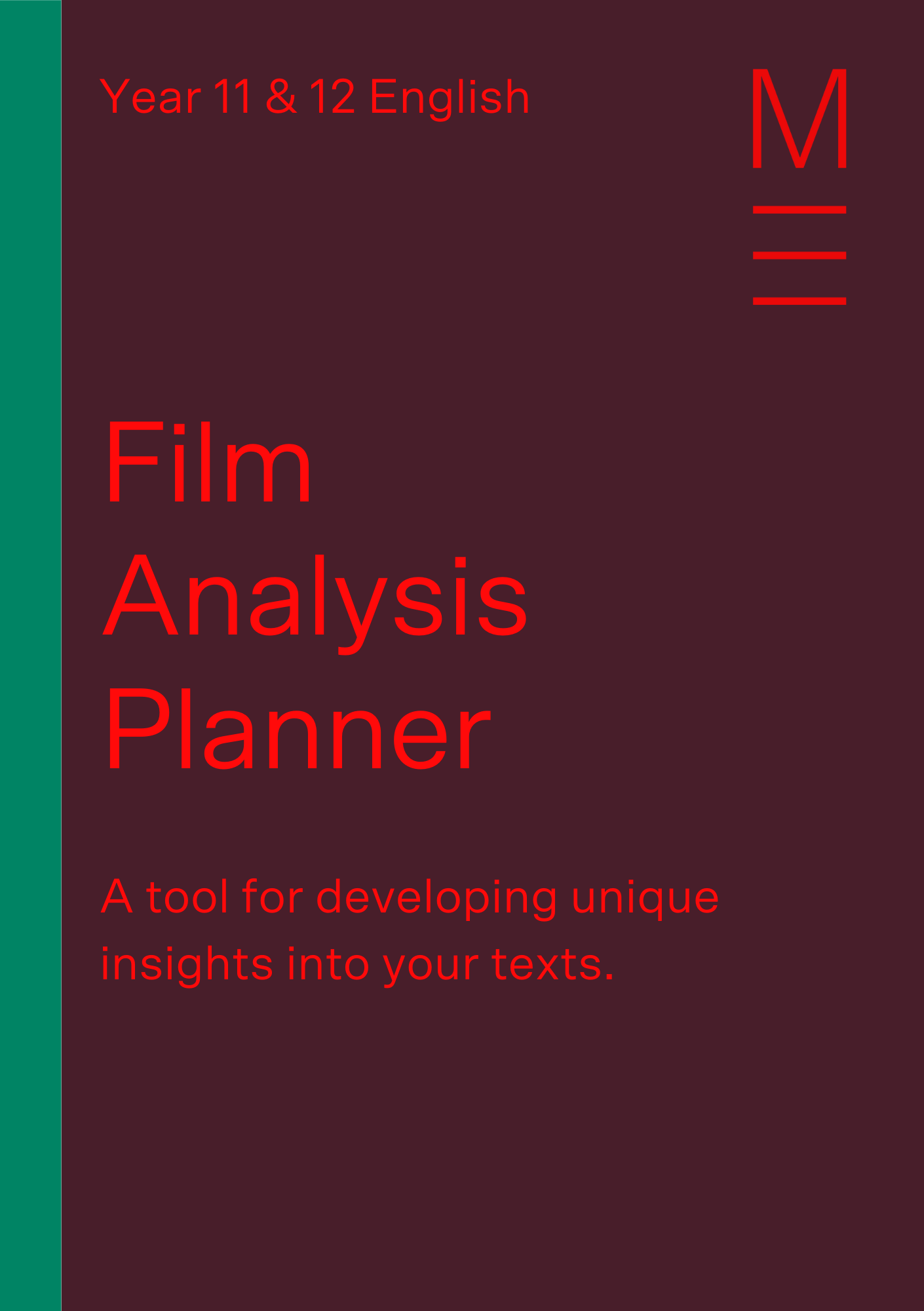 What is mise en scene?

Mise en scene is French for “putting in place/stage.” In films, it often refers to “what is put in a scene.” It is the intentional composition of different elements of the film to portray meaning and mood.

When film-makers and critics refer to mise en scene, they are often referring to these 4 main elements on the screen:

Note: Mise en scene is independent of the camera work or editing. This means that you shouldn’t analyse camera angles, or editing transitions when examining mise en scene because they are not “put in the stage”.

Now we know what mise en scene includes, let’s take a look at these components in detail.

Some elements that can make up the setting include:

Setting can help set out the mood or even foreshadow events. For instance, rainy, gloomy weather with a scary Gothic castle may seem spooky and even foreshadow negative events. On the other hand, a sunny day on the beach has the opposite atmosphere; it’s much happier.

Maybe you’ll notice that a particular prop or a part of the setting is emphasised in the scene. This may be an important symbol that can hint at hidden meanings in the scene. For example, a bright red gift box placed on a table in the centre of the screen would immediately draw the audience’s attention. This can help foreshadow future events.

Lighting refers to how the director uses lighting to guide the audience’s eyes, create texture and shapes, and allow legibility of what is happening.

Here are some elements of lighting that you can focus on:

We explain lighting in more detail in our Film Techniques: Lighting article, including examples for the different elements of lighting and their effects, and how to analyse lighting with an example.

Costume and make-up gives the audience context about the character’s personalities and traits, and their relationships with each other. It even helps emphasise the character’s particular features.

For instance, if Darth Vader wore colourful disco clothes (like Austin Powers), he wouldn’t come off as the scary villain. So, the director’s decision to make him wear black armour with a long coat and a mask makes him much more evil and villainous.

Staging or blocking refers to the actor’s movements and performance. Before filming, directors will ‘block out’ where the actors stand and their actions for the scene. This means that the characters are always meticulously placed in a scene to achieve a particular purpose, whether that is to create a particular mood or to forward the scene.

Directors will also discuss facial expressions or gestures with the actors to help carry the message across to the audience. Sometimes, particular actors are chosen for their typecasting, and other times actors are expected to have a realistic representation of a historical period.

So, when you are analysing staging/blocking, you should watch out for:

At Matrix, our comprehensive Theory Books and HSC English experts will help you navigate your way through English, so that you know everything about techniques and analysis!

How does mise en scene work?

Film-makers are very particular about what shows up on a screen and what doesn’t. So, by controlling the mise en scene of a scene, they are able to control the mood, atmosphere, and character development.

Remember, film is an art form; nothing is placed on the screen by mistake.

The 4 elements of mise en scene work together to set the mood and atmosphere of the film. Each element creates its own meaning. However, together (as mise en scene), the elements can complement each other or even contrast each other. It is your job to determine how this creates meaning and shapes the mood of the scene.

We briefly went through how each individual element creates meaning above. This will provide you with a foundational understanding of how mise en scene works. However, what separates mise en scene with lighting, costume, staging and setting is discussing the 4 elements together. So, you will need to examine how they work together to create meaning.

Analysing mise en scene might sound intimidating because there are so many elements involved. However, you can make the job seem easier by following these steps:

Let’s go through these steps in more detail to help you figure out how to analyse mise en scene.

1. Watch the scene and identify the main subject and mood/atmosphere

The first thing you should do is watch the scene again. Get a good understanding of what is happening in the scene, and how it relates to the rest of the plot.

When you are watching it, pay attention to:

Figuring out the atmosphere of the scene and the main subject will help you understand how and why the director shapes the elements in a particular way.

Now that you’ve identified the mood and subject of the scene, it is time to break down the elements of mise en scene.

Identify the setting, including:

2. What type of lighting is used?

See what type of lighting is used and consider the following:

Remember, if you need a refresher about these aspects of lighting and how it creates meaning, refer to the above paragraph here, or read our Film Techniques: Lighting article.

Take note of what the characters are wearing and what their make-up and hair look like, even if it seems mundane.

Take note of the following:

3. Consider how the elements help create the mood

Now that you’ve identified the elements of mise en scene, it is time to analyse it. This means that you need to examine how each of the elements creates mood on its own before you collate your findings.

To do this, you should do the following:

Let’s go through each step in more detail so you have a better understanding of what you need to do.

Understand what is happening in the scene and know its place in the plot/whole film.

There is no point analysing a scene if you don’t know what happens before or after it, and/or the scene’s role in the plotline. Is it part of the orientation or the climax? Is this a turning point that leads to a new discovery?

These clues help you find meaning and purpose in the scene, which will help you analyse the mise en scene.

2. General effect of each element

By now you should know the general effects of the different techniques used for each element.

For instance, underlighting (light coming from under the subject) can create a monumental feel, especially for large museum sculptures, or it can create a spooky mood when it distorts a person’s face during ghost stories.

We went through most of these above in our explanation of What is Mise en Scene. However, you can always use your common sense or intuition to find the general effect of each technique!

Now that you’ve figured out the general effect of each element, you should link it to the specifics of the film. Think about the plot, the character’s personality, and the themes in the film and ensure that the effect makes sense in the film world. Think about how the techniques affect the film and the audience’s mood.

Composers can always use common techniques to subvert conventions or create new meaning.

For instance, in Edward Scissorhands, Edward wears a black costume and has scary scissor hands. Normally, this will imply that he’s the villain and a scary character. However, Tim Burton subverts this by making Edward very nice and naive to show that you can’t judge a book by its cover.

So, it’s important that you link your understanding of a technique’s general effect to the film to have an accurate analysis.

4. Link the effects of the different elements

Once you’ve figured the effects of each technique and tied it to specific details of the film, you will need to collate your findings.

Remember, analysing mise en scene means that you need to examine how all the elements work together, not individually. So, take this chance to draw links between the different elements and how it helps create a particular mood.

The difference between a Band 5 and a Band 6 analysis is the “critical” aspect of your writing. This means that you need to examine the mise en scene’s purpose and significance within the whole film.

To do this, you will need to complete the following:

Once you’ve analysed the mise en scene, it is time to put your findings into a TEEL paragraph.

You can find a more detailed explanation of using T.E.E.L in our post on paragraph structure (this post is part of our series on Essay Writing and shows you the methods Matrix English Students learn to write Band 6 essays in the Matrix Holiday and Term courses). Let’s use this T.E.E.L to write about this example of imagery.

Now that you know how to analyse mise en scene, let’s go through an example to help you put your knowledge into practice! We will be examining a scene from George Clooney’s Good Night and Good Luck where journalist, Ed Murrow,  investigates the Radulovich report. Here Ed questions the validity of the government capturing Radulovich based on a “closed” letter.

To provide a little bit of context for you to better understand what is happening, Good Night and Good Luck is a historical drama film set in 1953 during the Cold War. It follows the story of a TV journalist, Edward Murrow, and his team investigating and criticising Senator McCarthy’s unjust hunt for Communists.

1. Watch the scene and identify the mood/atmosphere and subject

Step 1. The subject of the film:

Step 2. Mood/atmosphere of the film:

Step 1. What is the setting?

Step 2. What type of lighting is used?

Step 3. What is the costume/make-up?

Step 4. How is the staging/blocking?

3. Consider how the elements help create the mood

Step 2 and 3: Find the general effect of each element and link it to the details of the film

Step 4: Link the effects of the different elements

All four elements work together to create an overall sense of mystery and tension, which works well to contrast Ed Murrow’s trustworthy and admirable character.

In the above analyses, you will find that mentions of other elements are evident. This is because you can’t simply analyse one element without touching on the other elements.

Step 1. Link it to the themes/ideas of the film

The mise en scene of the scene highlights the importance of searching for the truth and questioning the government’s censorship.

To write in the T.E.E.L paragraph, we need to firstly collate our findings for the following:

Now, let’s put it in a paragraph:

Jonathan’s Hacks: How to Save Your HSC English Mark