In this post, we explain what juxtaposition is and how to talk about it in your responses.

Some common questions that students ask are:

Here, we will discuss JUXTAPOSITION. Keep reading to find out what juxtaposition is, how it works, and to see some examples of how to discuss juxtaposition in your responses.

The literary technique of juxtaposition is the placement of two things side-by-side in order to reveal a contrast. Composers can effectively emphasise things by letting the audience to the work.

When we place to things side-by-side we can’t help but compare them. Consider the image below: 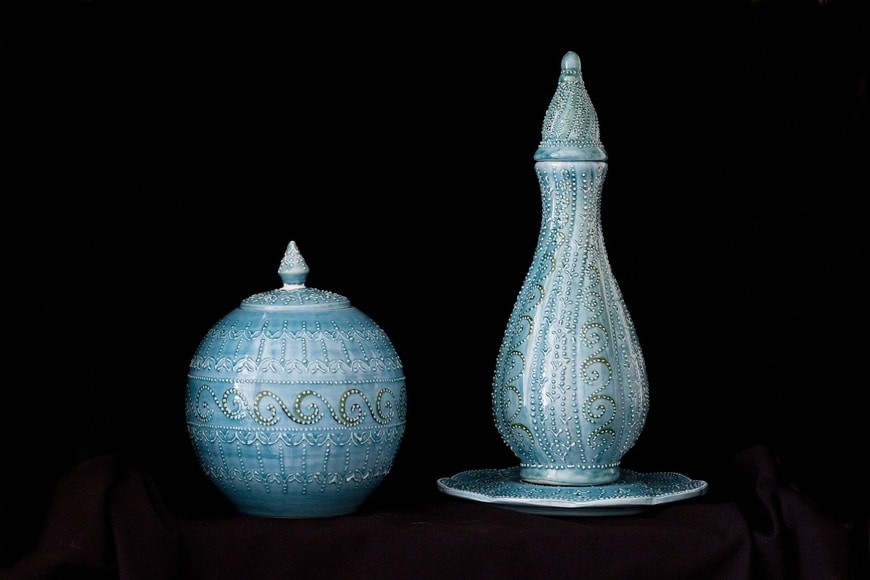 Image: A pair of Juxtaposed Vases

In this image, we can see two vases. While they are similar in colour and design, they are also quite different in form and shape. They both share the same raised spirals and swirls. The colour of the glaze is also the same. Yet, the shape is different. The one on the left is squat and round with a small lid. The one on the right is tall and slender with a long lid, it also sits on a saucer.

We can spot these things clearly because the vases are sat side by side. This is how juxtaposition operates, by allowing the reader to view things – be they characters or objects or ideas – side-by-side, the reader is compelled to examine the similarities and differences.

Analysing techniques can be daunting, but it needn’t be. Really, analysis is just a systematic process. The more you practice it, the easier and more intuitive it becomes.

Let’s look at an overview of the process of looking at juxtaposition:

“Let us go then, you and I,
When the evening is spread out against the sky
Like a patient etherized upon a table;”

Let’s see how to analyse this extract.

Step 1: Read the passage to see if things are being compared

This passage begins by describing a date as a pair of people prepare to go out. The persona narrating the poem states:

“Let us go then, you and I,
When the evening is spread out against the sky
Like a patient etherized upon a table;”

There are two distinct images here:

These are profoundly different images, aren’t they? Clearly, they are being juxtaposed. But why and to what end?

Step 2: Examine what is being compared or contrasted

The persona is describing a date. A date should be a romantic affair. And the description of the evening being “spread out against the sky” bears this up.

Let’s think about the consequence of this comparison.

Step 3: Understand the effect of the juxtaposition

The Love Song of J Alfred Prufrock is a critique of modern society and the rituals that were becoming commonplace, and in the persona’s view -sordid.

To this end, the opening lines offer an observation on dating during the early 20th century. Dating should be something romantic and profound, but it was becoming something bleak and procedural – like cutting up a patient on a table.

Clearly the persona is uncomfortable dating, because they perceive that dating has lost its traditional romance and sense of courtship. Instead it it is like prepping for an operation.

Now we understand what is being conveyed, we need to discuss. Let’s do that with a T.E.E.L structure.

Step 4: Write about the juxtaposition in a T.E.E.L structure

We now need to explain how this imagery develops meaning for the reader. The best way to do this is to use a T.E.E.L structure to explore what you perceive the juxtaposition to be conveying.

You can find a more detailed explanation of using T.E.E.L in our post on paragraph structure (this post is part of our series on Essay Writing and shows you the methods Matrix English students learn to write Band 6 essays in the Matrix Holiday and Term courses). Let’s use this structure to discuss this example of juxtaposition.

Let’s put this together into a complete statement about this use of juxtaposition:

Now let’s look at some examples. We have included an explanation for each, and a sample response for the first one.

Consider the additional examples of literary juxtaposition below:

In Shakespeare’s Julius Caesar, Marc Antony juxtaposes the noble acts of Caesar with the refrain ‘and Brutus was an honourable man’ in order to negatively characterise Brutus negatively to his audience.

How to discuss juxtaposition in an essay:

“Look here, upon this picture, and on this,
The counterfeit presentment of two brothers.
See, what a grace was seated on this brow;
Hyperion’s curls; the front of Jove himself;
An eye like Mars, to threaten and command;
A station like the herald Mercury
New-lighted on a heaven-kissing hill;
A combination and a form indeed,
Where every god did seem to set his seal,
To give the world assurance of a man:
This was your husband. Look you now, what follows:
Here is your husband; like a mildew’d ear,
Blasting his wholesome brother. Have you eyes?”
Excerpt – The Tragedy of Hamlet, Prince of Denmark, Act 3, Scene 4, William Shakespeare – 1601

While berating his mother, Hamlet juxtaposes positive images of his father and her former husband, King Hamlet, with grotesque images of Claudius, whom Gertrude has married. The effect of this is to emphasise the contrast Hamlet sees between the two men, and to horrify his mother.

Juxtaposition is not purely a literary technique. We can also find it find in visual texts such as films. Consider these two shots from Fritz Lang’s Metropolis (1927): 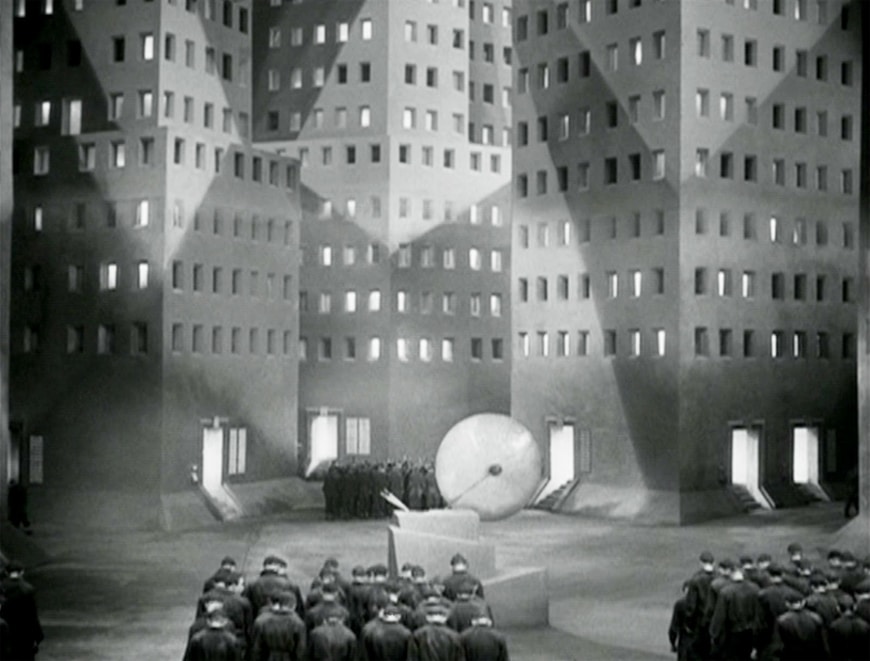 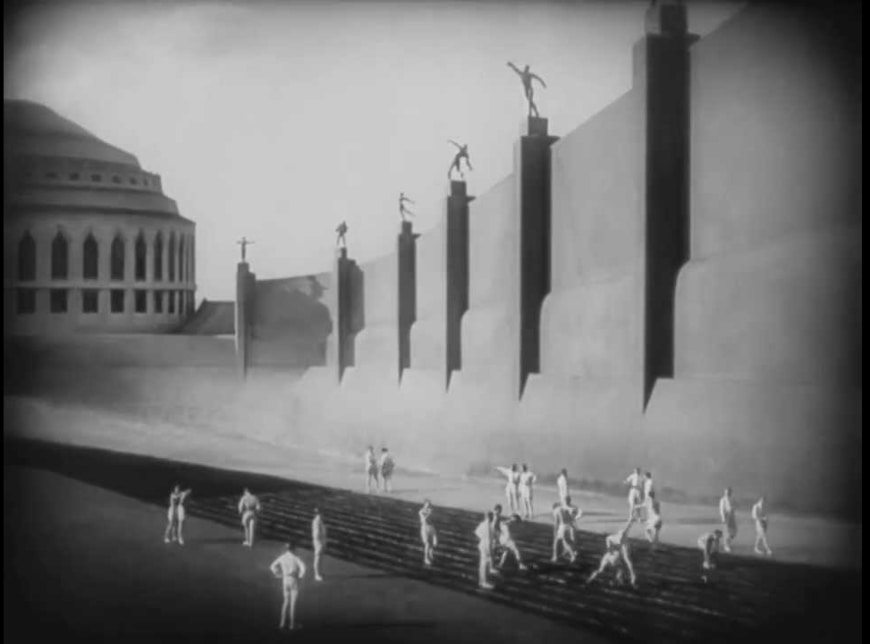 In the first still, we see the Worker’s City. It is underground and dark. The workers walk together with hunched shoulders towards cramped and towering apartment blocks. In the shot next to it, we can the Club of Sons. It is wide open and naturally lit. The people have lots of space and appear active and happy.

Lang juxtaposes these two shots next two each other to show the inequality between the two groups: the workers are oppressed and exploited, the sons of industry are privileged and given lots of space.

Learn how to utilise and discuss allusion in your English responses!

Alan’s 15 Secrets For Studying Successfully During COVID-19 And Scoring An ATAR Of 99.95

6 Must Know Tips To Ace Your Physics HSC Trial Exam