In this post, we explain what a literary allusion is and how to talk about them in your work.

Some common student questions about allusion are:

In this post, we will discuss allusion, consider the different types of allusion that are used commonly, and provide a step-by-step guide to analysing allusion. We will also give you a couple of examples of allusions in texts, to help you get a deeper understanding of the technique.

Need help developing and organising your analysis of allusion?

Use the free textual analysis planner to develop your study notes and keep track of your possible arguments.

A planner to help you learn how to analyse your texts and produce detailed notes so you can produce Band 6 responses.

1. What is allusion
2. Types of allusion
3. How to analyse allusion: a step-by-step guide
4. Allusion examples

Read on to learn how allusion works, what its effect is, and how you should discuss it in an essay.

Allusion is a very common and effective technique. The meaning of allusion varies, but you should treat it as a relatively indirect reference in one text to another text, place, historical period, or author.

Allusions rely on the audiences knowledge of other texts, places, or times to develop meaning.

This is very similar to an intertextual reference or a parody.

But whereas intertextual reference cites another texts directly and parody is a clear appropriation and comment of another text, allusion only signals to another text.

Confused about how to identify and analyse techniques?

Make good use of your school holidays and refine your English skills! With Matrix Holiday Courses, you will learn your content in 9 days, so you can revise English and balance your other subjects during the term.

Allusion is one of those techniques where there are a variety of different forms of allusion. These differ depending on the type of thing the allusion is referring to.

The most common form of allusion is a religious allusion, but there are also historical, mythological, and literary allusions.

For example, in the Western canon of literature, many religious allusions relate to the bible and ideas such as the Garden of Eden or classical myths, and also the Grecian gods.

Now we know what allusion is, what the different types are, and how it works, let’s look at how to analyse it.

How to analyse allusion: A step-by-step guide

Analysing techniques is daunting. But it shouldn’t be. There is no mystery to literary analysis.

As Matrix students learn, it is a systematic process. Let’s have a look at the overview of how to analyse an allusion: 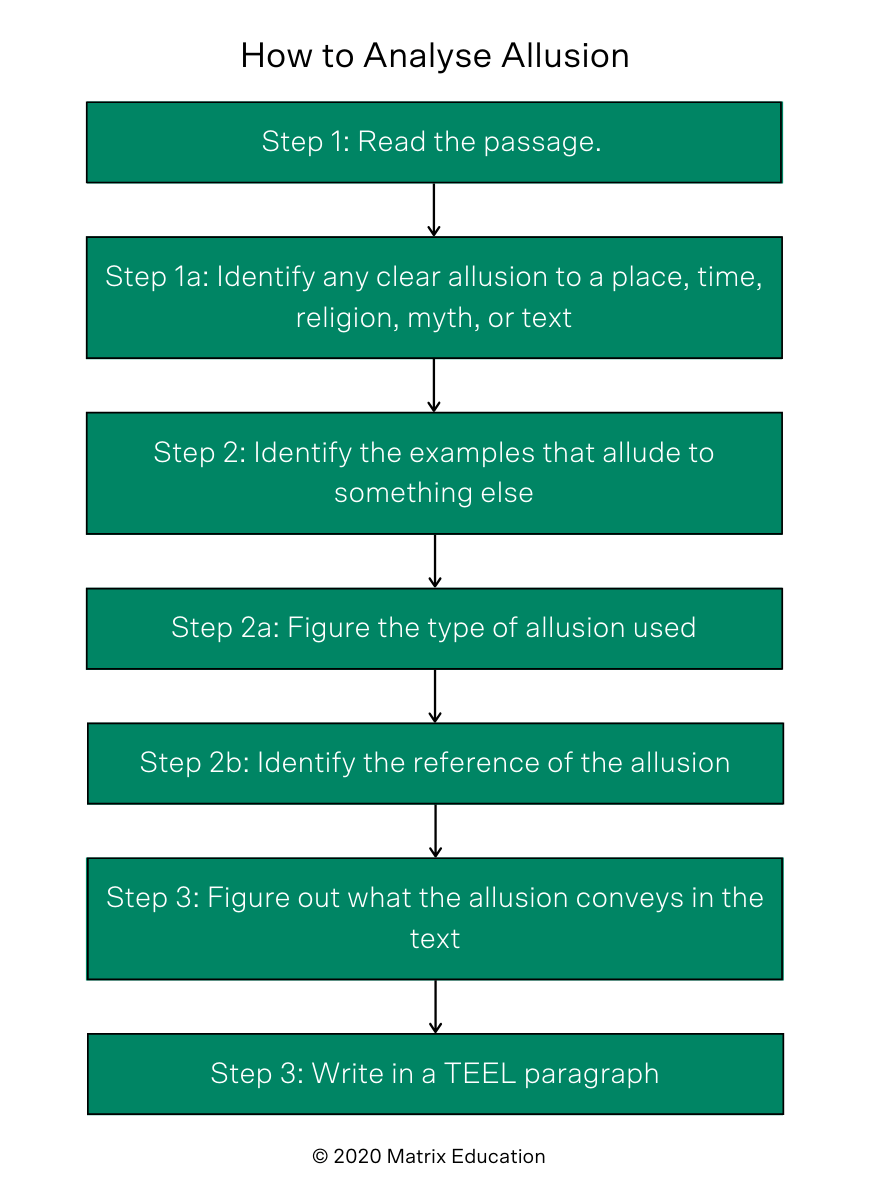 Now we have an idea of what this procedure is, let’s go through it in detail.

To do this, let’s consider an extract from the second stanza of  John Donne’s The Sunne Rising.

Thy beams, so reverend and strong
Why shouldst thou think?
I could eclipse and cloud them with a wink,
But that I would not lose her sight so long;
If her eyes have not blinded thine,
Look, and tomorrow late, tell me,
Whether both th’ Indias of spice and mine
Be where thou leftst them, or lie here with me.
Ask for those kings whom thou saw’st yesterday,
And thou shalt hear, All here in one bed lay.

In this poem, the persona is using the conceit of chiding the sun for waking himself and his lover by rising. The poem is full of contextual references that are historical allusions to our 21st century context.

Step 1: Read the passage and look for a reference to a period, religion, myth, or text

If we read this stanza we find the following three lines that are referencing something:

Look, and tomorrow late, tell me,
Whether both th’ Indias of spice and mine
Be where thou leftst them, or lie here with me.

Of particular interest is the phrase “th’Indias of spice and mine“.

This is referring to a place and clearly is intended to convey something, but is it? Let’s have a look.

Step 2: Identify what the allusion is alluding to

Often to unpack an allusion we have to think about our knowledge of myth, religion, place, or history.

This allusion is referring to a place, the “Indies of spice and mine.” But it is the place of a specific historical time – the rule of James I.

At this time the Caribbean, known then as the Indies, was a desired trading partner and a place considered ripe for plundering.

The general public perceived the Indies as places replete with wealth that were making nations like Spain and Holland very wealthy through spice imports and what they had extracted through the mines.

Donne is referring to this vast wealth, and its political importance, in this reference.

Let’s figure out what this means.

Step 3: Unpack what it is representing in the text

The Sunne Rising is a love poem. The persona, the male lover, is chiding the sun in front of his female lover for waking them up and interrupting their activities.

This is a witty conceit, because the sun obviously wouldn’t listen to a simple man on earth when it does the same thing day-in-and-day-out. In the extract,

Look, and tomorrow late, tell me,
Whether both th’ Indias of spice and mine
Be where thou leftst them, or lie here with me.

The persona is personifying the Sun and telling it to go and leave the lovers alone and go visit the Indies, and to not return until the following day.

Why is this a strong allusion?

Well, the Indies was a valuable location and site of plunder for Europe during the 1600s. Many perceived it to be a far-off and fantastic place dripping with wealth.

In this reference, the persona is implying that the sun should go look at the wealth and exotic splendour in the Indies and compare it to the person the persona was sharing his bed with. The implication is that the person sharing the persona’s bed is more pleasantly fragrant or valuable than any spice or gold to be exported from the Indies.

Now we know what is being alluded to, we need to explain how it creates meaning for the reader.

Step 4: Write about it in a T.E.E.L structure

We now need to present this example and discuss its technique. But we also need to explain how it represents meaning and connects to an argument.

To do this, Matrix Students would use a T.E.E.L structure to explain what they perceive the allusion to be conveying.

You can find a more detailed explanation of using T.E.E.L in our post on paragraph structure (this post is part of our series on Essay Writing and shows you the methods Matrix English students learn to write Band 6 essays in the Matrix Holiday and Term courses). Let’s use this T.E.E.L structure to write about this example of an allusion.

Now we need to discuss this. Matrix students would learn to use the following structure for writing their responses:

Now that we’ve gone through this process of analysis in a systematic manner. Let’s take a look at some other examples of allusion.

There are many religious allusions in Shakespeare’s Hamlet. Let’s look at one. Consider the extract below from Act 1, Scene 2 of the play, where Claudius criticises Hamlet’s protracted mourning of his father’s death:

Claudius:
‘Tis sweet and commendable in your nature, Hamlet,
To give these mourning duties to your father:
But, you must know, your father lost a father;
That father lost, lost his, and the survivor bound
In filial obligation for some term
To do obsequious sorrow…
For what we know must be and is as common
As any the most vulgar thing to sense,
Why should we in our peevish opposition
Take it to heart? Fie! ’tis a fault to heaven,
A fault against the dead, a fault to nature,
To reason most absurd: whose common theme
Is death of fathers, and who still hath cried,
From the first corpse till he that died to-day,
‘This must be so.’

The bolded line is a religious allusion to the murder of Abel by his brother Cain.

Claudius is trying to make the point that death is a common part of human life.

He uses the religious allusion to Cain and AbeI to signify this point.

However, this religious allusion is ironic, as, like Cain, we find out that Claudius has murdered his brother (and Hamlet’s father), King Hamlet, out of jealousy.

Allusions don’t have to be religious or mythical, they can be literary.

In T.S. Eliot’s ‘The Hollow Men,’ there is an allusion to a celestial rose described by Dante Alighieri in his Paradiso. Consider the following extract from stanza 4:

Sightless, unless
The eyes reappear
As the perpetual star
Multifoliate rose
Of death’s twilight kingdom
The hope only
Of empty men.

At one point in Eliot’s poem the reader encounters the phrase ‘multifoliate rose,’ but Eliot does not mention Dante or the Paradiso by name.

He is alluding to these lines from the Paradiso where Dante’s pilgrim sees the celestial city of Heaven:

“And as a hill is mirrored
in waters at its base, as if to see
itself—when rich with grass and flowers—graced,

so, in a thousand tiers that towered above
the light, encircling it, I saw, mirrored,
all of us who have won return above.

And if the lowest rank ingathers such
vast light, then what must be the measure of
this Rose where it has reached its highest leaves!“

This is an allusion, because Eliot doesn’t quote Dante’s Paradiso, but instead alludes to it so that we may make the connection between the texts ourselves.

How to discuss allusion in an essay:

Confused about how to identify and analyse techniques?

Make good use of your school holidays and refine your English skills! With Matrix Holiday Courses, you will learn your content in 9 days, so you can revise English and balance your other subjects during the term.

Year 11 Biology: Cells As The Basis Of Life Practice Questions