Film Symbolism | How to Analyse Symbolism in Film or TV

We all recognise film symbolism when we see it, but often we don't know how to describe it or articulate what it is! In this article, we break down what symbolism in film is, how it works, and how to discuss it!

Do you find it difficult to identify symbolism used in film? This article will help you understand how symbolism is employed in film and how to analyse it.

In this article on film symbolism, we’ll discuss:

Symbolism is often talked about as a literary technique. However, it certainly occurs in film as well. There are many different ways in which symbolism can exist in film. In this article we will explore some different versions of cinematic symbolism. We will also explore how to provide a textual analysis of cinematic forms of symbolism.

According to the Oxford English Dictionary symbolism is:

something that stands for, represents, or denotes something else.

The word ‘something’ here is important because that ‘something’ can be one of many different things. In cinema, many things can be symbolic. These things could include: an object, colour, character, plot, sound, special effect, camera angle, a transition, and much more.

Oftentimes, we have to infer what individual symbols refer to. We can use the context of the film, and its overall themes and purposes, to make this inference. But in the end, our interpretation is our own. There is no single correct answer. This is because symbols in film can be cloaked in ambiguity (you can read more about ambiguity, here). There are only answers that are more convincing than others. If there are many possible things that are symbolised by something in a film, ask yourself:

If you want to learn more about symbolism in literature, read our article, here. Because symbolism can work in a variety of ways in film, in this article, we’ll talk about cinematic symbolism in the use of objects, characters, colour, sound, and plot.

It’s worth noting that cinematic uses of metaphor and symbolism are quite similar in effect.

How does cinematic symbolism work?

Okay. So now we know what cinematic symbolism is, we need to see how it works. Let’s have a look at the different types of symbolism used in film.

The use of colour in film can have particular symbolic effects. Take for example the colour of Captain America’s costume.

Left: Still from Avengers: Endgame (2019) Dir. The Russo Brothers | Right: The Flag of the United States of America

Captain America’s costume contains the blue white and red colours of the US national flag. This symbolises how he represents the US and its values (e.g. power, freedom). Here we can see that the colours represent the abstract ideas associated with US patriotism.

Film makers often used sound and music to affect the viewer in unconscious ways. Sometimes directors attach certain kinds of music to certain characters. The music becomes symbolic of the kinds of things that character represents. For example, you are probably aware of this famous piece of film music:

This music (called ‘The Imperial March’) can also be called a leitmotif as it often plays with the entry of Darth Vader or other figures from the Imperial Army (the evil characters). As we watch the film, the dark, menacing music becomes symbolic of evil, danger, and unlimited power.

If you want to learn more about how music works in film, please read our article on Music in film.

In some films, entire characters stand in for concepts or ideas. The Batman film, The Dark Knight (2008), was released right at the end of US president George W. Bush Jr.’s presidency. This was after the US had experienced the terrorist attack on New York, 9/11, and when ‘The War on Terror’ (a war essentially against Islamic extremism) had been in full swing for several years.

Some commentators saw The Joker as a symbol of terrorism. He threatens to bring chaos to the city of Gotham (the US). Some also saw Batman as partly symbolic of George Bush. This is because Batman’s morally questionable attempts to crush The Joker (terrorism) mirrored some of the heavily-criticised counter-terrorism policies that Bush introduced to control extremism in the US. In this instance, we use our knowledge of the context in which The Dark Knight was created in order to read symbolic meanings into the characters.

Sometimes, particular objects stand in for certain ideas the composer wants to convey. Take for example the following object from the recent, Oscar award winning film, Parasite (2019). At the beginning of the film, the impoverished Kim family receive a gift from a wealthy friend:

It’s a ‘scholar’s stone’, a kind of charm, which is meant to bring material wealth to families. The film is about the Kim family’s attempts to scam another wealthy family so that they can make money and crawl out of their poverty-stricken situation. The scam brings about calamity for the Kim family and almost destroys them. This stone regularly returns to the camera – even when the Kim family’s fortunes appear to be at their lowest point.

The stone reminds the viewer of our tenacious desire for money. The drive for wealth (within ourselves and within the social system) can sometimes ruin our lives. At some points, the stone seems like a symbol of hope for wealth, but at other times if feels like a curse: money might be the very ‘parasite’ suggested by the film’s title. In this instance, we use our knowledge of the overall themes of the film in order to find symbolic meanings in the rock.

Some films have plots that appear to be about one thing, but in fact are symbolic of something else. For example, the Japanese animated film Akira (1988) is, in part, about an awesome power that humans try to control but which is unleashed in a catastrophic explosion as pictured below:

The parallels to the atomic bombs which were dropped on Japan in World War II have been pointed out by many. Towards the end of the film, some key characters point out that humanity is not ready to control this mysterious power: ‘It’s too big for us as we are now’. The characters are forced to give up trying to wield this power and look to an unknown future where it might be possible to control it : ‘someday we ought to be able to…’

While on the one hand, this plot is a science fiction story about an imagined power in the future. On the other hand, we could see this plot as symbolic of Japan’s relationship to nuclear power. Japan makes significant use of nuclear energy to power its cities, despite having experienced the worst effects of that power. The film’s plot asks whether we really are morally developed enough or even scientifically capable of wielding nuclear power safely. This is another example of where we use the context in which a film was made in order to better understand the symbolism within it.

How to analyse symbolism – Step-by-step

As with all techniques that we analyse in English, it’s best to use the TEE formula to write about them. When analysing film, we want to provide:

Metropolis is about a futuristic city with an oppressed working class that is exploited for the benefit of a rich minority.

For the purpose of this article, we’ll obviously use the technique of symbolism.

This image depicts a factory worker moving rods to different parts of a wheel as part of their robotic, exhausting job. Lang symbolically superimposes the numbers of a clock (presumably that of a ten hour shift) on top of the worker’s wheel.

Let’s assume that our argument about the film is that:

Lang highlights the oppressive conditions experienced by the working classes.

Step 3: Analysis – an explanation of technique and effect

We want to provide textual analysis that is related to this argument. It’s no use providing an explanation of effect that is unrelated to our argument about the film. For instance:

This final sentence is an explanation of effect of the technique, however, it’s not clearly related to the argument we proposed earlier.

Step 4: Link – Connect your analysis to the argument

We need to ensure that the link to our argument about the film is clear. A better piece of textual analysis might be:

Here we have linked the worker’s enslavement by the clock to our argument about the oppressive conditions experienced by the working classes.

How do I get better at analysing film?

A good way to improve on analysing techniques such as symbolism is to practice writing about them on your own. You can use the example structure given in this article to write pieces of textual analysis on whatever films you are watching. Try to find an example of symbolism and explain the effect of it on you as a reader. Try to link that effect to your own argument about what you think the film is trying to express. Every small bit of practice on your writing goes a long way!

Matrix English Advanced courses provide you with HSC experts who will develop your analytical and writing skills so you can be one step ahead! Learn more.

Expert teachers. Band 6 resources. Detailed feedback. We'll help you boost your English marks, wherever you are. 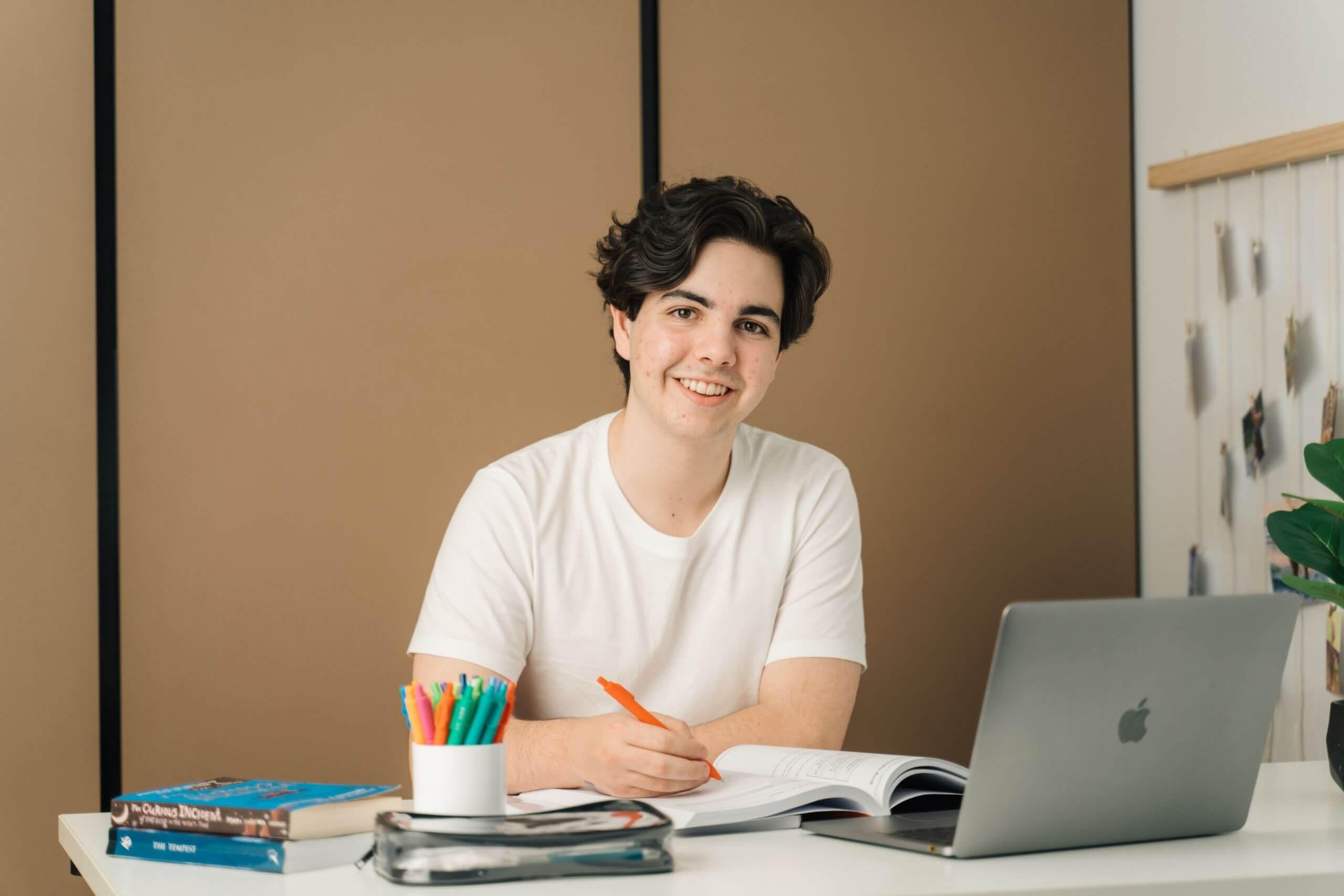 Dr Timothy Kazuo Steains has been a teacher at Matrix since 2013. He has written and contributed to various textbooks for Matrix students. He is also a lecturer in Gender and Cultural studies and researches in the areas of Asian Australian studies, and boys studies.

HSC Physics: How to Build a DC Motor | Video and Step by Step Guide