Love film but don't know how to analyse or discuss it? In this Guide, we give you the ultimate toolkit to identify and discuss those must know film techniques.

Looking for a comprehensive list of film techniques and a breakdown of how they create meaning? Well, this is it. In this searchable guide, you’ll find all the important film techniques you need to discuss in your essays.

Films take us on journeys; we become immersed in worlds beyond our own. The best films lead us to ask questions about our world as well as ourselves. However, sometimes it can be difficult to translate our reactions to film into meaningful English analysis.

We’ve put this list together to help you make sense of these choices and analyse films more effectively.

To understand how the various techniques combine to create meaning, watch the following video we have put together that lists the techniques employed in various film scenes.

The list below provides some of the key film techniques for writing about cinematic texts.

Camera angles refer to the tilt of the camera in relation to the scene and the characters. Unusual camera angles can emphasise an action sequence, disorientate the audience, and suggest the relationship between characters.

The main angles are: 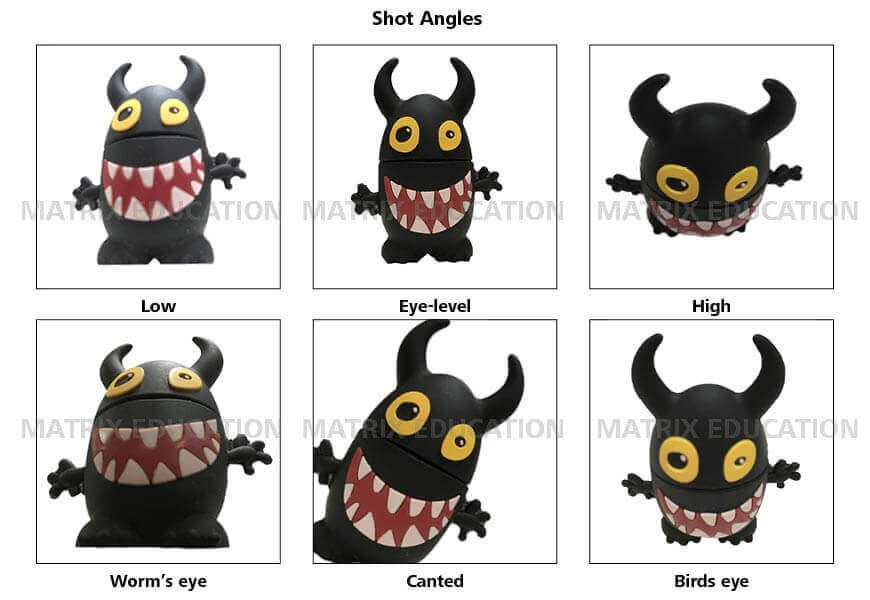 A shot that marks the passage of time in a film. This is sometimes a series of newspaper headlines, a calendar, tress going through seasonal changes, or the hands turning on a clock.

This bridging shot marks the passing of evening. Note the fast turning of the clock hands and rapid melting of the candle.

Colour, especially the choice of colour palette or scheme, can reflect the mood of the piece. Colour in a scene can also be enhanced through lighting.

For example, in The Great Gatsby (2013), the use of a vibrant colour scheme reflects the opulent lifestyle of New York elites in the 1920s.

You can learn more about colour symbolism at Studio Binder. 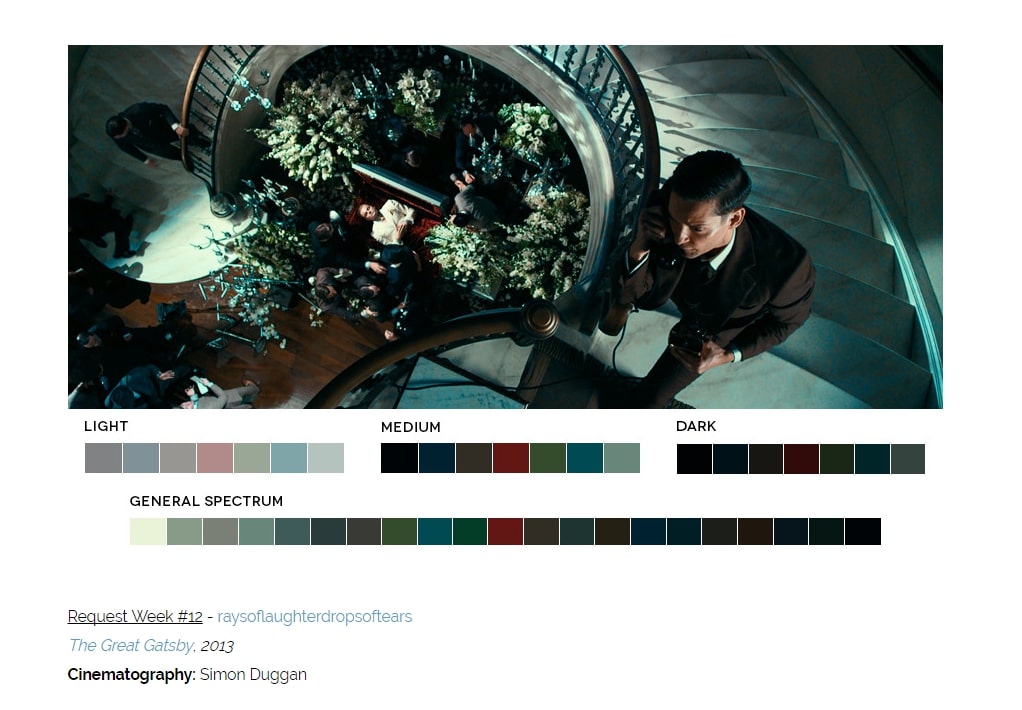 Cucoloris is a lighting technique where an object is placed between the light source and the subject in order to create a patterned shadow. A staple of film noir.

Filter used for Cucloris. Image and device by Henry Nelson.

Cross cutting is used in Christopher Nolan’s Inception (2010) to build tension in a crucial action scene.

A conversation between two characters is called dialogue. Written by scriptwriters to convey the film’s plot, dialogue is also useful in conveying character.

A transition that moves between one shot and another by overlaying one shot and fading the first image out while strengthening the second shot. This can denote daydreams, memories, the passing of time, or signify phone conversations and long-distance communication.

In this dissolve, we are taken to one of Larry “Doc” Sportello’s memories that are triggered during a phone call.

A dolly is a wheeled cart that the camera and operator are seated on. A dolly shot is a shot where the dolly is pushed along to move with the action. This is similar to a tracking shot, but without the tracks so that the camera can have a broader range of motion.

The video below discusses the difference between dolly shots and zooms and how they can be used (or even combined) to create effects and meaning.

The order of each shot and how they have been put together to create a scene. This is usually based upon the storyboard used by the director.

However, some directors such as Werner Herzog refused to use storyboards, and shoot many scenes which they edit together by trial and error.

In editing, wipes are used to transition between scenes in a variety of ways rather than just cutting. Types of wipes include:

In this scene of Mark Waters’ Mean Girls (2004), we see a horizontal wipe being used to draw emphasis to Karen’s appalled facial expression.

Put your film knowledge into practice!

Studying English shouldn’t stop because you’re at home! We provide you with clear and structured online lesson videos, quality resources, and forums to ask your Matrix teachers questions and feedback! A type of extreme long-shot that establish the context – time and setting – of a scene or film. Often establishing shots use famous landmarks or places, like the Sydney Harbour Bridge. 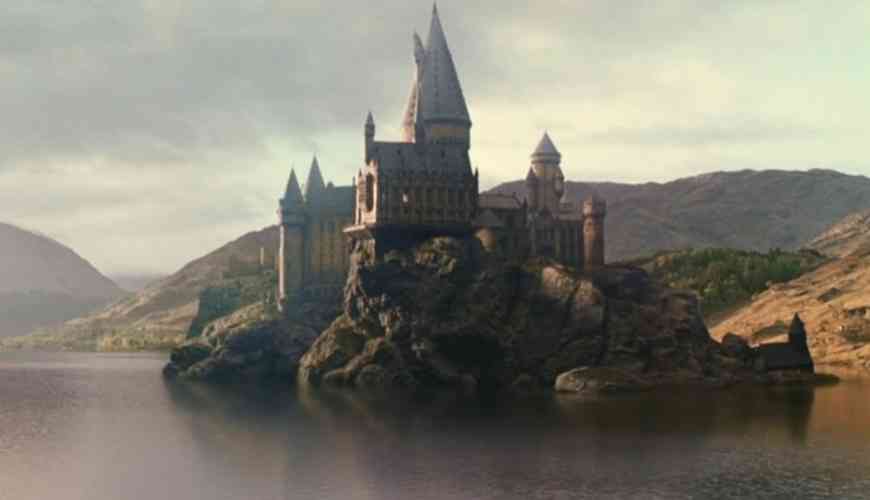 It’s used in Stephen Daldry’s The Hours (2003) to capture Clarissa’s fearful expression as she watches Richard perched on the window sill.

An editing technique where the shot fades out from one shot going to black before fading into a new shot.

This scene from Mark Waters’ Mean Girls (2004) fades out, as Cady processes how Regina was just hit by a bus.

Images that refer to previous events in the characters` lives. Flashbacks can be used to foreshadow future events.

Text which is printed on a background and placed between filmed scenes through editing. In silent films, intertitles can convey dialogue and exposition. 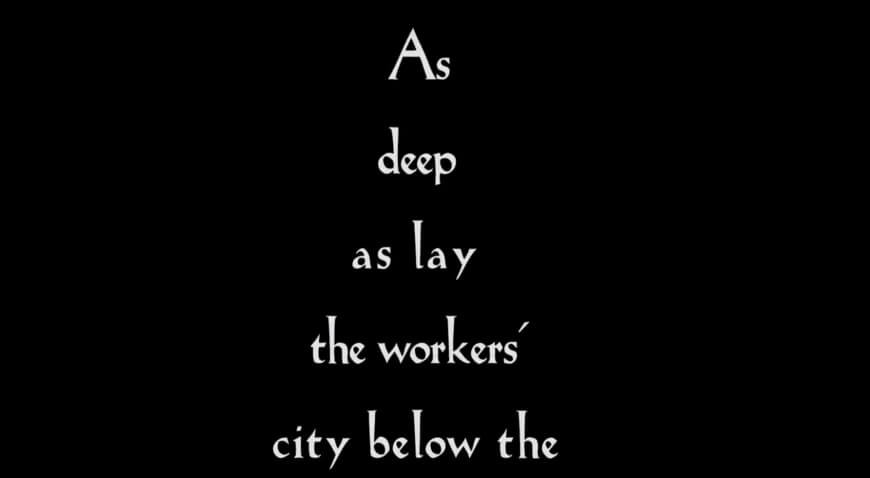 Similar to other editing wipes, this is a type of transition where the screen irises closed around a particular thing on screen. These can be used to signify daydreams, provide a dramatic transition, or signify the end of a scene.

Below is an instance of jump cuts in Frank Oz’s Little Shop of Horrors (1987).

Lighting contributes to the mood of a film and suggests interpretations of a character. Are they good? Are they nefarious?

Low key lighting emphasises the shadows in a shot, while lighting from above or below can suggest that a character possesses sinister qualities.

An example of a sinister cat lit from below. 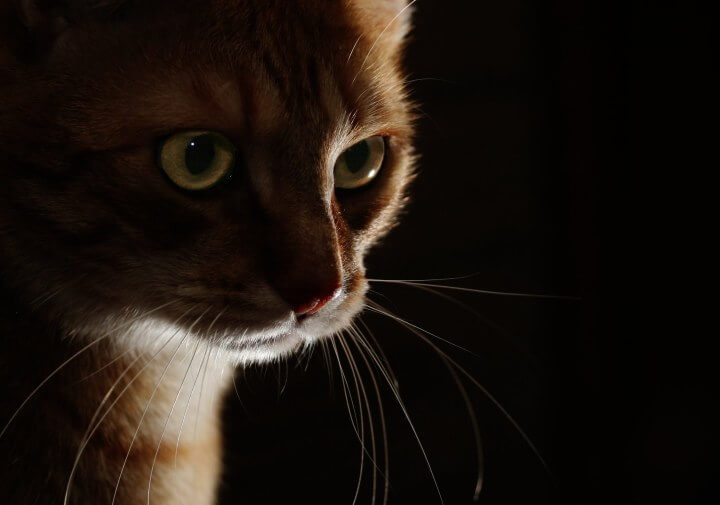 An example of shadows from Low Key Lighting.

Jumps from one shot to another similar shot that matches the composition of the first shot.

Here’s an example of a match cut in the opening of Taylor Swift’s Style music video.

Mise en scène translates as ‘what is put into a scene’. This French expression refers to the composition of a scene, including placement of characters, costume, make–up and setting.

A mise en scène from Mean Girls featuring Regina standing haughtily at the back, students arguing with each other about contents of the Burn Book, and a boy calling his mum to pick him up.

A montage is a type of editing sequence where a series of shots play rapidly to create a narrative. Often a montage will be accompanied by a unifying piece of music to convey the dominant mood connected with the sequence.

Mood refers to the feelings suggested by the combination of all the elements on the screen and the accompanying sound. Another way to refer to the mood is to discuss atmosphere.

Music can convey the theme, mood and atmosphere. There are different types of music in films.

A type of sequence shot or tracking shot where the camera follows a character by following them and shooting over their shoulder. Like a Point of View shot, an over the shoulder shot focalises (that is, focuses in on) on the characters experience.

Stephen Daldry’s The Hours (2003) utilises an over the shoulder shot of Virginia frustratedly speaking to Leonard.

Also referred to as a Long Take or Sequence Shot. A one-shot is actually a type of long-take or sequence shot where the effect of being one shot is created through editing. For example, Alejandro G. Iñárritu’s 2014 film, Birdman uses careful editing to give the appearance of a single take.

In some cases, a one-shot is used to refer to whole films made in one take, such as the 2015 film German film, Victoria.

A shot where the camera swivels horizontally around a fixed point to follow the subject.

A panning shot is used in Amy Heckerling’s Clueless (1995) to show Cher chasing her father around the kitchen to give him a glass of orange juice.

A shot that is taken from a character’s point of view, like a first-person video game. Point of View shots focalise (that is, focus in on) a character’s experience. 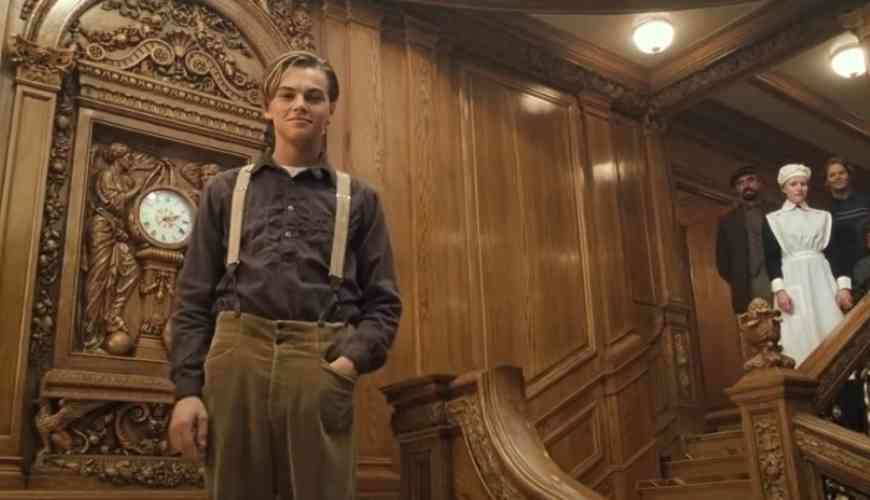 A shot from Rose’s point of view in Titanic (1997), as she imagines reuniting with Jack on the Grand Staircase

A shot where the camera shifts the focus while holding the same shot to bring another object into focus. Rack shots change the depth of the shot.

The example below is from the TV series Sherlock. In it, the focus shifts from Sherlock to Watson.

Animated GIF: In this rack shot, the focus shifts from Sherlock in the foreground to Watson in the background.

A unit of narrative used to divide up a dramatic text or film. A scene usually takes place in a single location and focuses on a single action in one moment of varying length.

The place where the action of the film occurs.

A famous example is Martin Scorses’s Copacabana shot from his 1990 film, Goodfellas.

This shot illustrates the Henry Hills’ wealth and connections while he shows off to his date. This take combines over the shoulder and point of view perspectives.

Shot types indicate how close or far the camera is from the characters. Shot types range from Extreme Long Shot (XLS), where the characters may be very small and embedded in a landscape, to Extreme Close Up (XCU), where part of the character’s face makes up the whole shot. 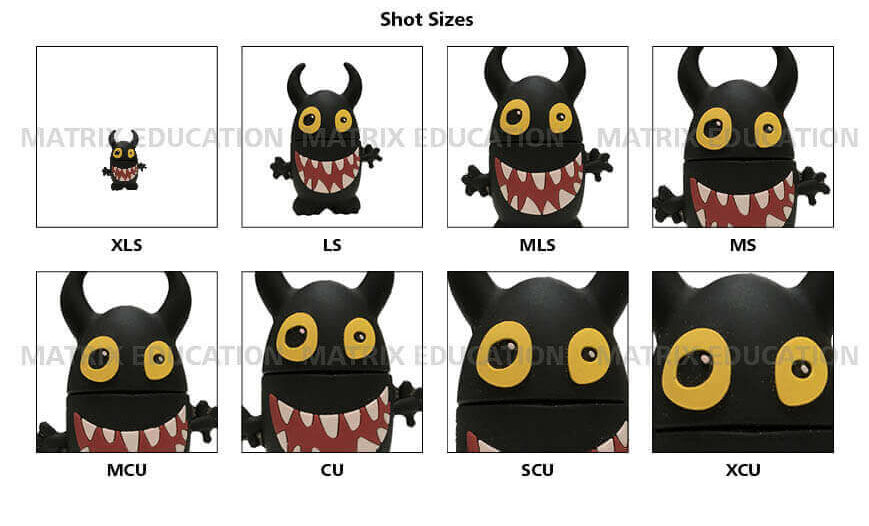 The sound of a film helps to create atmosphere – this can include:

An object used to suggest ideas in addition to, or beyond, their literal sense. For example, the glass slipper in Cinderella symbolises the opportunity that Cinderella has to live a different life. Watch films carefully to spot symbols and their potential meaning to the plot. If a symbol recurs throughout the film it is a motif.

Animated GIF: This GIF is from Sam Mendes’ American Beauty (1999). The dancing plastic bag symbolises how beauty is found in things that are often discarded. The bag is rubbish to many, but its dance in the wind is beautiful.

A type of camera that is used in action sequences. A steady cam rig allows the camera to be worn by the operator so they can follow an action sequence without the shot become overly jerky.

This video shows examples of shots taken with the steady cam, explained from the perspective of a steady cam operator.

A way to transition between shots. Transitions involve cuts, fades, and wipes (see above for specific definitions).

This is a good video that explains these various techniques.

When the camera tilts in shot to show the subject away from the horizontal axis.

A shot that follows a subject as they move.

In Jane Campion’s Bright Star (2009), a tracking shot of Brawne is used to capture her grieving reaction to Keats’ death.

A shot that features two characters and is used to establish or develop their relationship.

The camera zooms in or out to focus on an object or to show how far away it is. Zooms can be used for dramatic effect or can be used to show objects in relation to each other for scale.

See Dolly Shot above for a video discussing the difference between Zooms and Dolly shots.

We hope you found this ultimate film techniques list useful. Don’t forget to check the individual articles to broaden your knowledge of film like Matrix students do.