Use this ultimate Nineteen Eighty-Four cheatsheet to get on top of your Common Module study for Year 12! Understand the context, themes, and characters central to Orwell's classic.

Are you struggling to wrap your head around Nineteen Eighty-Four for the Year 12 Common Module? Don’t worry, unlike Big Brother, we’re really here for you! In this article, we give you a one-stop-shop for key ideas about Orwell’s dystopian classic!

Want to know what a Band 6 Nineteen Eighty-Four Essay looks like?

Download our exemplar essay, fresh from the Ministry of Truth. 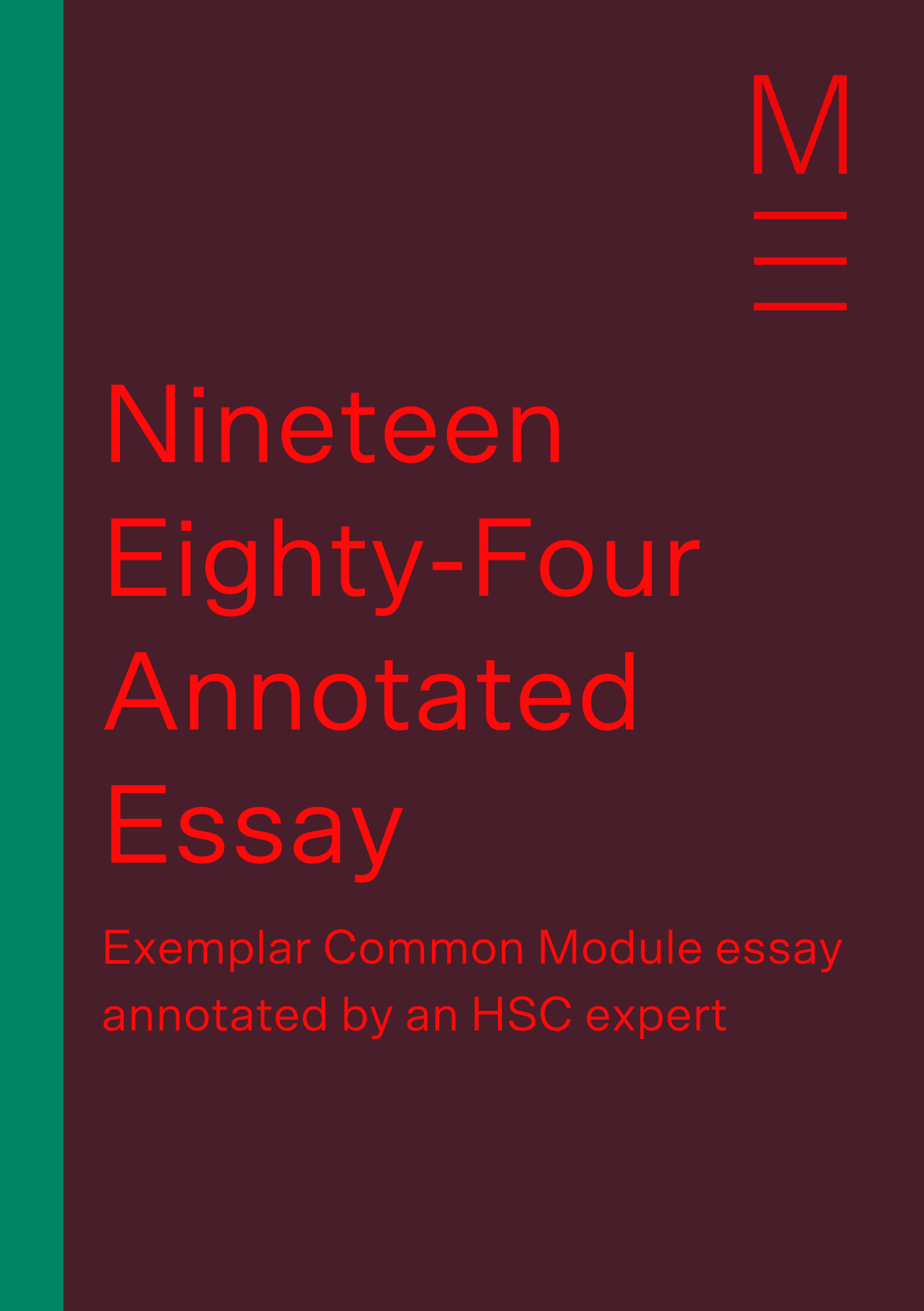 What is Nineteen Eighty-Four about?

The world of Nineteen Eighty-Four

In Nineteen Eighty-Four, the world is separated into 3 big nations as opposed to hundreds of smaller countries:

The novel takes place in Oceania (specifically Airstrip One, where London used to be) and Ingsoc is the tyrannical government of the state with the enigmatic Big Brother as its ruler. The citizens are expected to worship him and maintain an unconditional loyalty to his regime, even if this involves betraying their closest family or friends. The world is constructed to deprive the individual of any happiness, as they are solely devoted to Big Brother and Ingsoc.

Ingsoc is bound by 3 principles. They are: “War is peace. Freedom is slavery. Ignorance is strength.”

These principles are demonstrated through the 4 ministries which govern the nation, these are all named ironically:

However, there is an underground organisation that attempts to overthrow the government: The Brotherhood. Big Brother claims that the leader of this organisation is a powerful and dangerous subversive, Emmanuel Goldstein.

These rebels believe in free will and individual rights. So, their members commit crimes like cheat and murder to betray Big Brother.

However, in Part 3 of the novel, we find out that The Brotherhood may not really exist. Instead, it is a false flag operation and Big Brother’s way of weeding out rebellious individuals so they can be publicly tried and brainwashed into compliance.

The novel commences with Winston (an Outer Party member who works at the Ministry of Truth) returning to his dilapidated home.

He is very cautious and wary of the surveillance. There are telescreens everywhere – including his home, the bathroom, and the streets – watching for any sign of non-conformity, which the Party refers to as “thoughtcrime”. Citizens are denied all freedoms and blindly follow the Party doctrine to avoid persecution. Persecuted individuals are tortured until they admit to all the crimes that the Party falsely accuses them of, hung in front of a live audience, and their existence is completely vaporised — that is, the individual’s existence is removed from all written media and denied by all other citizens (any mention of a vaporised person would be a thoughtcrime).

Winston shows disdain for the Party’s strict regime and despite the risk of persecution, he engages in increasingly severe acts of rebellion against the Party as the novel goes on. This includes recording his free thought in a diary (even the act of obtaining a diary is illegal), engaging in an intimate relationship with fellow Party member Julia, and eventually attempting to join The Brotherhood by reaching out to Inner Party member O’Brien, who he suspects is secretly a traitor to the Party.

Ultimately, we discover that O’Brien was manipulating Winston and is in fact dedicated to the Party’s mission to maintain “power for the sake of power”. O’Brien reveals to Winston and Julia that their rebellion was always being monitored by the Party, but they simply allowed them to continue to offer then false hope and subsequently crush any hope for freedom. After being tortured and humiliated in the Ministry of Love, Winston and Julia are defeated and left disillusioned. They betray one another with no desire to reunite. The novel ends with Winston expressing how he regrets betraying Big Brother and announcing his unconditional love and loyalty to the Party as fantasises about being executed to serve the party.

Winston is our protagonist. As an Outer Party member, his freedoms are strictly confined by the regime and he is not ranked highly enough to receive any privileges. He is 39 years old and the novel makes several references to a varicose vein on his leg. He rebels with a dream to overthrow Big Brother’s regime.

Big Brother is the figurehead of Ingsoc and the totalitarian dictator of Oceania. It’s not clear whether Big Brother is a person who actually exists, but even the belief that there is a greater power looking over the nation is enough to command loyalty from most citizens.

The Brotherhood is thought to be a coordinated underground rebellion against the Party. Like Big Brother, we never see proof that it actually exists. Nevertheless, the belief that it exists motivates Winston and Julia to rebel.

Julia is Winston’s younger lover who claims to have had multiple affairs with Party members. Julia rebels for fun and personal enjoyment. She is far more pragmatic than Winston who has grand hopes to overthrow the regime.

O’Brien is an Inner Party member who Winston believes is a member of the Brotherhood. However, he turns to be a true Party supporter and seeks to obliterate rebels like Winston and Julia.

Similar to how Big Brother figureheads the Party, Goldstein figureheads The Brotherhood. The Party uses Goldstein as a political scapegoat and compels its citizens to direct their frustrations towards him. The citizens shared hatred towards Goldstein unites them and motivates them to turn to Big Brother for protection.

Orwell was an Indian-born British writer known for his social criticism and advocacy for democratic socialism. Orwell’s experiences as an imperial police officer in Burma, voluntarily living in the slums of London, and witnessing the horrendous acts committed by fascist regimes during the Spanish Civil War shaped his strong opposition to political control.

Nineteen Eighty-Four is only one of his many works, including the highly influential political satire Animal Farm (1945), that challenge totalitarianism and authoritarian social and political practices.

Orwell began writing Nineteen Eighty-Four only a few years after the end of World War II and the novel contains many references to the nuclear warfare that the U.S. instigated with Japan. The under-supplied and bland living conditions of Oceania were also probably inspired by those in London during WWII. Furthermore, Orwell captures the atmosphere of paranoia and uncertainty that clouded all nations during the war that threatened global destruction.

Orwell was initially supportive of the Spanish Revolution and even volunteered to fight against the Fascist government in the Spanish Civil War (you can read his autobiographical account of this in Homage to Catalonia). However, he became disillusioned by the atrocities committed by both sides. Events like organised purges conducted by the Nationalist forces and mass executions by the Republicans were all real events that Orwell emulates in Nineteen Eighty-Four.

Orwell uses Nineteen Eighty-Four to portray how those desiring political control often disguise their intentions well, which highlights the need for society to maintain critical thought and agency.

It is widely believed that the world of Oceania is a reflection of Joseph Stalin’s oppressive dictatorship over the Soviet Union. The description of Big brother as “the face of a man of about forty-five, with a heavy black moustache and ruggedly handsome features” uses imagery to make a clear reference to Joseph Stalin. In fact, “2 + 2 = 5” was actually a slogan that the Soviet Union used to reinforce their promise to complete their ‘Five-Year Industrial Plan’ in four years. Orwell twists the meaning of the slogan to warn how authoritarian regimes manipulate reality.

The Party demands the sole attention and commitment of its people, and prevents its citizens from finding greater value in other relationships and experiences that could undermine their loyalty to the Party.

This is stated with a factly tone in what Winston believed to be Goldstein’s Manifesto: “A Party member is expected to have no private emotions and no respites from enthusiasm.”

In order to enforce this, the Party creates the impression that they are constantly monitoring each citizen and have a dedicated Thought Police. Moreover, propaganda is strictly censored to support the Party’s narrative and is “plastered everywhere”.

Orwell portrays a frightening world where the government has complete control over every action, motivation and thought that its citizens have. With this, the government is able to impose any ideology that suits their regime, even if it is completely absurd. The Party’s paradoxical slogan “WAR IS PEACE, FREEDOM IS SLAVERY, IGNORANCE IS STRENGTH” is a recurring example of this.

In fact, the citizens of the regime help enforce the Party’s control by reporting any unorthodox behaviour, even if this means their own family and friends will be persecuted. As a consequence, no opposition to the regime will be able to gain traction and influence

The citizens of Oceania are barred from any freedoms because any individual thought or identity that does not exactly align with the Party’s regime threatens its infallible status. Winston’s diary, coral paperweight, and relationship with Julia symbolise his desire to be autonomous and to be appreciated as a unique individual.

This paradox, coupled with Winston’s realisation that the proles are the only people with enough man-power and freedom to rebel (“If there is hope, it lies in the proles”), foreshadows the futility of Winston’s rebellion.

Without Winston’s desperate hope for freedom, the novel would have been a predictably bland one, as Winston would have just blindly followed Big Brother like his fellow citizens. Instead, we get to see how Winston’s hope for freedom motivates him to rebel in ways, which deep down he knew he would be caught for, but desperately hoped he would be able to get away with. Winston was aware of the paradox that,

In fact, Winston clings to the hope that the Brotherhood and its supposed leader Goldstein exists, even though he is perfectly aware that the Party fabricates news and narrative to affirm their regime.

[Winston’s] heart went out to the lonely, derided heretic on the screen, sole guardian of truth and sanity in a world of lies.

The metaphor, “his heart went out”, emphasises Winston’s humanity and empathy, which continually skews his judgement throughout the novel. So much so, that Winston buys multiple banned items (a coral paperweight, furniture, even renting a room), is sexually intimate with Julia, and confesses to O’Brien that he wants to join the Brotherhood, even though there was nothing (except for big stretches of his imagination) to suggest that an Inner Party member like O’Brien would rebel or benefit from rebelling.

Ultimately, we learn that Winston’s rebellion was hopeless all along, but it’s interesting to consider whether his fleeting experience of freedom was worth it. Moreover, it reminds us to be politically active and critical to prevent our world from becoming hopelessly controlled like Oceania.

The Matrix English Team are tutors and teachers with a passion for English and a dedication to seeing Matrix Students achieving their academic goals.

What’s The Difference Between A Band 5 And Band 6 English Response?

3 Biology Study Hacks You Must Know