Learn how to tackle Eliot's poetry for Module B with our comprehensive two part study guide.

In our first article on TS Eliot, we discussed how to analyse his poetry. Now that we have considered themes and textual integrity in our study of Module B: T.S. Eliot, we need to think about how textual analysis supports these ideas. We need to demonstrate to the reader that the examples from the text demonstrate its CANONICAL STATUS and TEXTUAL INTEGRITY. What examples should we look for in the poems?

Let’s have a go. We’ll consider two of the poems set for study: The Love Song of J. Alfred Prufrock (1915) and The Journey of the Magi (1927). The HSC exam usually asks students to consider at LEAST TWO poems in their response. Ideally, you will want to examine a selection of themes in both of these texts.

For this blog, we will consider the theme of isolation in these two poems. Let’s see how Eliot represents this theme. 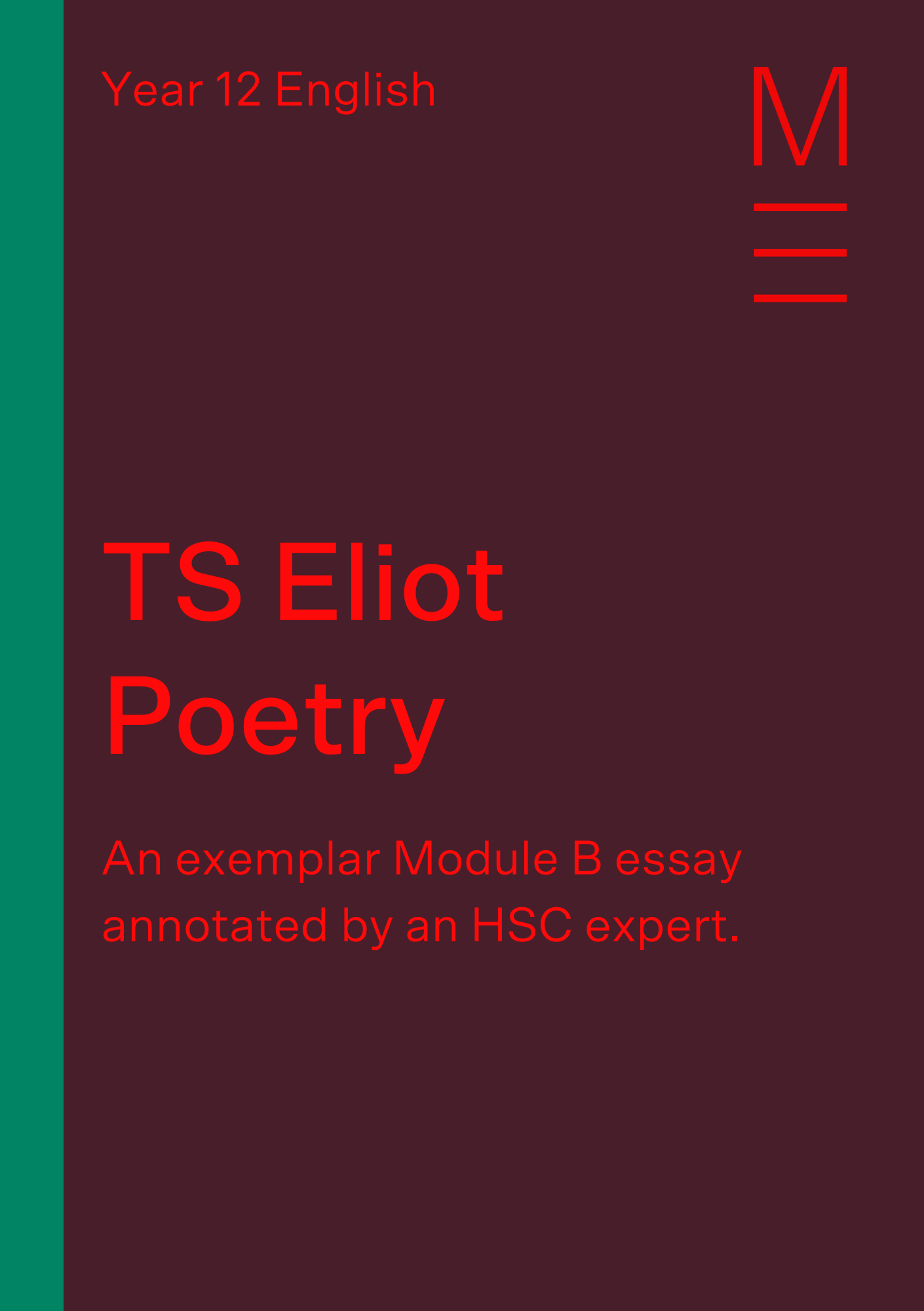 What is the theme of isolation? Modernists felt that the industrial world and its onerous requirements on time and labor were isolating individuals from the community. The longer work hours of modern life and the ever increasing financial burden of living in a modern world meant isolation and loneliness was inevitable. An individual needs to work to pay for shelter and food. Many felt that the isolation that accompanied modernity led to a breakdown of social cohesion, and a corruption of social values. Industrialisation seemed to be dragging people away from society.

Let’s look at some examples from the text to see how Eliot conveys this concern to his audience:

I grow old … I grow old …
I shall wear the bottoms of my trousers rolled.

Shall I part my hair behind? Do I date to eat a peach?
I shall wear white flannel trousers, and walk upon the beach.
I have heard the mermaids singing, each to each.

I do not think that they will sing to me.

In the above extract, Prufrock is imagining himself as an old man. When Prufrock repeats “I grow old … I grow old …” he articulates an awareness of his ageing, but also a sense of regret. The pauses (known as caesura and marked here by ellipsis ….) embody his reluctance to face his ageing and the implicit knowledge that he has failed at life. The persona also uses imagery to describe his old-aged-self as an old man with “the bottom of [his] trousers rolled.” His pants are too long and his solution is to roll them up, rather than to have them altered, and wander about like a vagrant. Fashion, after all, is a common marker of social status and wealth, and Prufrock definitely isn’t fashionable.

Prufrock believes that modern society values youth; and thus, he feels he is too old to be of use. The final two lines in this extract are an intertextual reference to John Donne’s song “Go Catch a Falling Star.” Donne’s poem is about ageing, and the reference to mermaids refers to the fantastic creatures that pulled men to their deaths under the sea. Only this old Prufrock does “not think that they will sing to me.”

The universal human traits that Prufrock demonstrates, such as his loneliness and isolation, mark him as an “everyman.” His struggles are common and embody the disenfranchisement felt by many in response to the modern world. Individuals are caught between the mundane difficulties of how to behave in public (‘Do I dare to eat a peach?’) and how to appear to others (‘Shall I part my hair behind?’) while struggling with their dreams (for example, the allusion to fantastic desires in “listening to mermaids sing” that are embodied in Donne’s poem). This Prufrock is old and lonely and possibly impotent, and he knows the young and beautiful mermaids will have no use for him. The effect of this is to further entrench the image of Prufrock as an outsider, somebody forever trapped outside of the social interactions of the modern world.

While the modern world and its anxieties are what limit Prufrock from attaining his potential, the Magi face a different struggle: to belong.

There was a Birth, certainly
We had evidence and no doubt. I had seen birth and death,
But had thought they were different; this Birth was
Hard and bitter agony for us, like Death, our death.
We returned to our places, these Kingdoms,
But no longer at ease here, in the old dispensation,
With an alien people clutching their gods.
I should be glad of another death.

Journey of the Magi is told from the perspective of one of the three kings who travelled to witness the birth of Christ. Eliot’s journey has parallels to this. He found his faith late in life. Eliot found this challenging as his world in the 1920s was increasingly secular. His acquaintances and peers were typically moving away from religion and closer to atheisim.

Journey of the Magi discusses the sense of isolation that stems from holding beliefs that are different from the majority. In the extract, the proper noun ‘Birth” refers to the birth of Christ. This is symbolic and represents the end of the old religions and the start of Christianity. The persona’s statement that “this Birth was / Hard and bitter agony for us, like Death, our death” presents the paradox that the birth of the Saviour was like a death. This is a bitter irony, especially given how arduous the journey was. The Magi gain religious salvation for their faith, but this new faith ostracises them from their own societies. This is the metaphorical “Death, our death.” Social isolation is like a death. And this is embedded in the lines’ enjambment, too!

Remember, enjambment works by presenting the appearance of a flowing line, whilst inserting a pause in the speaker’s delivery (this seeming contradiction is known as the rejet). The Birth should be something magical and transcendent, but instead it burdens the witnesses and is “hard and bitter agony.” Why? Because the persona, a king or Magi, no longer feels at home in his kingdom: his subjects are metaphoric “alien people clutching their gods.” Hence, the speaker has a bitter and condescending tone as he discusses the religious ignorance that sees him as isolated from his own subjects. This means that form and language are combining to develop meaning. So this is an example of TEXTUAL INTEGRITY!

If you are still unsure what textual integrity is, you must read our Essential Guide to Textual Integrity.

He used to have mates, but now they don’t understand each other’s perspectives. This is why the speaker “should be glad of another death,” (this time a real rather than metaphorical one), so he can meet his saviour in heaven who understands him. But this might take a while; the new religion means he can’t kill himself to hasten the journey – an additional burden.

The effect of this final stanza demonstrates how strong beliefs and faith can be isolating and bitter. This is especially true of those, like Eliot, who were conservative (having a belief in tradition and traditional values and laws) and adopted conservative faith later in life. Their journey was at odds with the progress of modernism and secular liberalism.

We can use themes to discuss the texts’ CANONICAL STATUS by comparing these two examples from Prufrock and Magi. Both of these texts present the experience of individuals isolated from society. Their experiences and beliefs leave them outside of the norms and expectations of society, and the cold modern world will make no exceptions for them. Both the Magi and Prufrock are left to grow old on their own and suffer along in a society that refuses to understand them. Eliot presents this universal concern in a manner that possesses TEXTUAL INTEGRITY. You could then argue that because of this, these poems deserve their place in the canon!

Now we have considered TEXTUAL INTEGRITY, CRITICAL ANALYSIS, and CANONICAL STATUS you need to think about composing a response. In the third and final part of our Module B: T.S. Eliot series, we will look at how to write this up in an essay response and consider a critic’s perspective.

Our 9-week Module B TS Eliot course will teach your everything you need to know to write Band 6 responses. Learn more.

Megan’s High School Hacks: How I Bought Back Time With Extracurriculars And Hobbies

Nathan’s Hacks: How to Defeat Distraction to Focus 100% on Your HSC