Are you confident analysing texts for Module A? Do you know how to develop your Richard III and Looking for Richard textual analysis? In this post, we show you how to analyse Shakespeare's classic tragedy and Pacino's modern reimagining of it.

Do you know what you need to do for Textual conversations?

Don’t know where to start with your King Richard III and Looking for Richard textual analysis?

Well, you need to get your head around the content and concepts central to both texts and consider them through the lens of a contextual study. So in this post, we give you a step-by-step guide for analysing and writing about King Richard III and Looking for Richard.

If you haven’t already, you should read our overview of Module A: King Richard III and Looking for Richard – Dos and Don’ts.

King Richard III & Looking for Richard – Textual Analysis: What is Module A?

First, before you start analysing the text, you must understand the module. Let’s look at the key sections of NESA’s Module A, Textual Conversations Rubric:

Module A: Textual Conversations
In this module, students explore the ways in which the comparative study of texts can reveal resonances and dissonances between and within texts. Students consider the ways that a reimagining or reframing of an aspect of a text might mirror, align or collide with the details of another text.

In their textual studies, they also explore common or disparate issues, values, assumptions or perspectives and how these are depicted. By comparing two texts students understand how composers (authors, poets, playwrights, directors, designers and so on) are influenced by other texts, contexts and values, and how this shapes meaning. 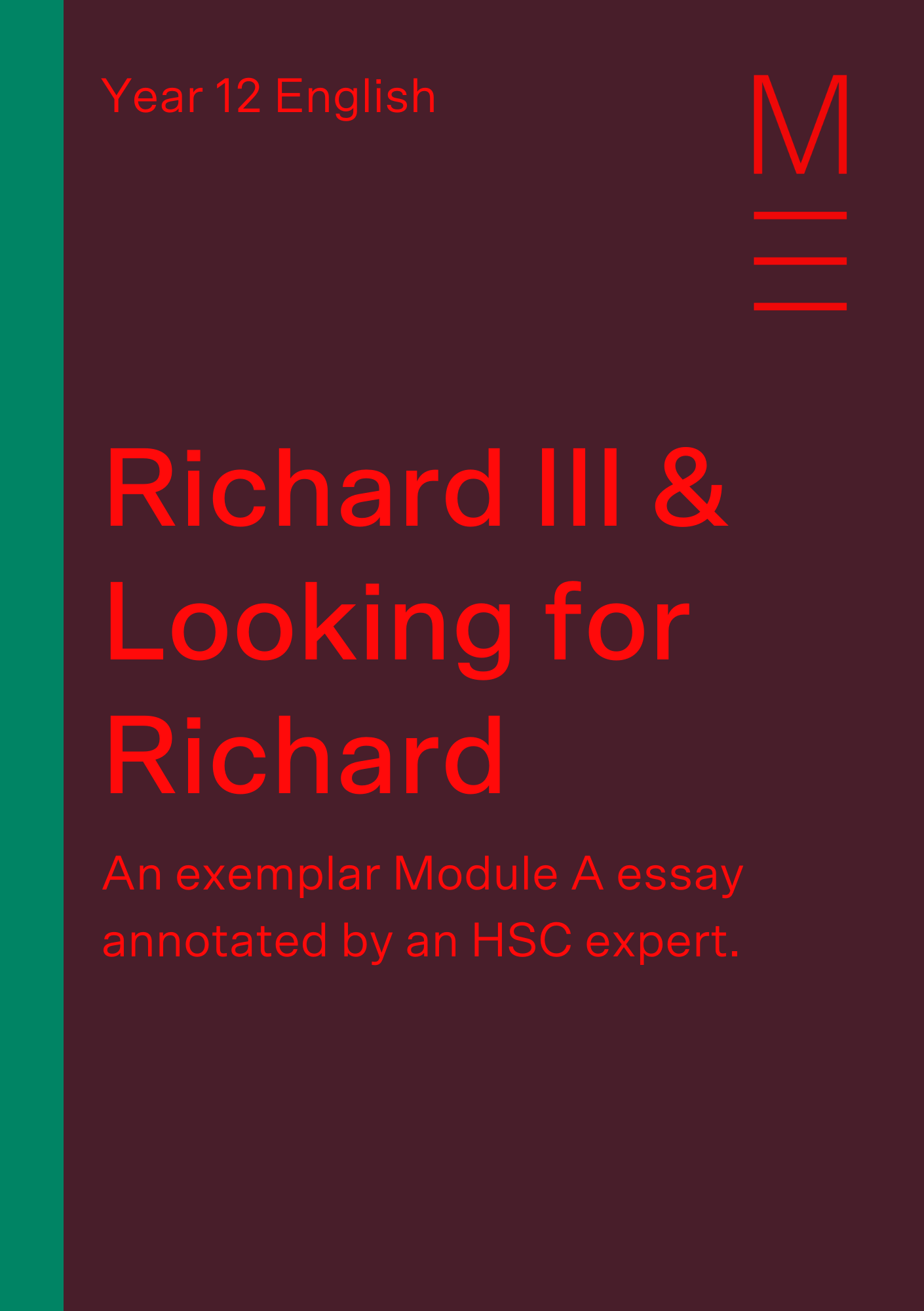 What does this mean for you?

You need to compare two texts – the original and the reimagined – and analyse how texts reflect the context in which they are made.

Additionally, you need to identify the common values and differences between the texts to explore the human condition and society over time.

You must take into account how the composer’s decisions can shape your understanding of social issues, values, assumptions, or cultural perspectives from your context.

You then want to apply this to the texts you are studying.

So, in this case, Shakespeare’s King Richard III and Pacino’s Looking for Richard both explore the desire for power and political corruption. However, each text has a different focus that is reflective of their context:

This is just an example of a theme can be analysed in your responses.

What you choose to focus on will be determined by question asked.

If you want to learn more about Module A, read our Year 12 Study Guide Article.

Now, let’s look at the process for analysing Shakespeare and Pacino’s texts.

Do you need help acing that Module A Essay?

Learn how to structure and write an HSC essay step-by-step with HSC experts on Matrix. 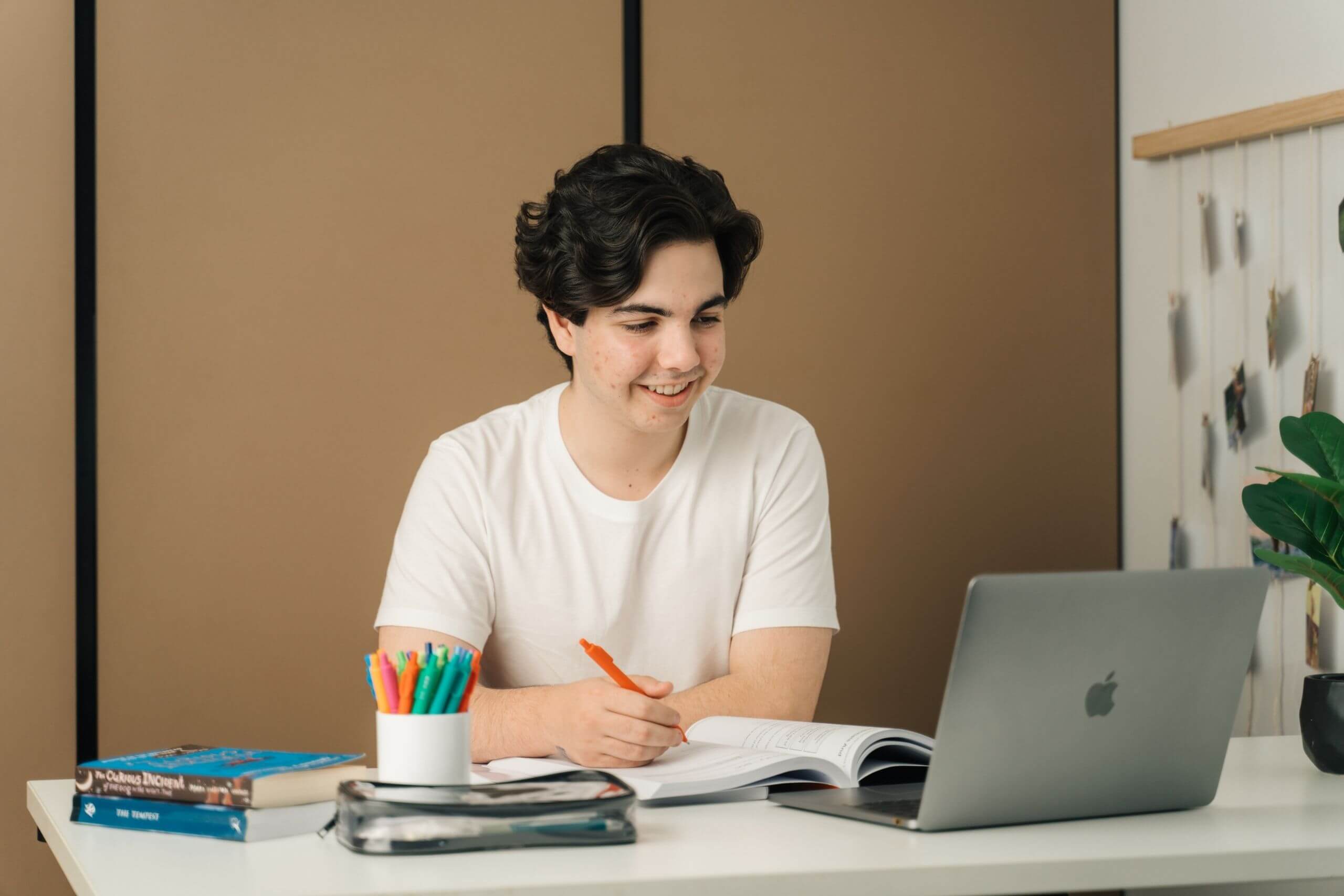 Step-by-step: How to analyse a passage from King Richard III

Now let’s look at a passage in King Richard III and analyse it in terms of the module requirements. Afterwards, we’ll look at the opening of Looking for Richard from Act 1, Scene 1.

Richard:
Now is the winter of our discontent
Made glorious summer by this son of York,
And all the clouds that loured upon our house
In the deep bosom of the ocean buried.
Now are our brows bound with victorious wreaths,
Our bruisèd arms hung up for monuments,
Our stern alarums changed to merry meetings,
Our dreadful marches to delightful measures.
Grim-visaged war hath smoothed his wrinkled front;
And now, instead of mounting barbèd steeds
To fright the souls of fearful adversaries,
He capers nimbly in a lady’s chamber
To the lascivious pleasing of a lute.
But I, that am not shaped for sportive tricks,
Nor made to court an amorous looking glass;
I, that am rudely stamped and want love’s majesty
To strut before a wanton ambling nymph;
I, that am curtailed of this fair proportion,
Cheated of feature by dissembling nature,
Deformed, unfinished, sent before my time
Into this breathing world, scarce half made up,
And that so lamely and unfashionable
That dogs bark at me as I halt by them —
Why, I, in this weak piping time of peace,
Have no delight to pass away the time.

Step 1: Understand the plot of the passage

The play opens with Richard’s soliloquy after the victory of the war. He describes the peace and glory that people are enjoying; men flirting and King Edward IV in a chamber full of women.

However, Richard turns around and complains about his deformed appearances and having a limp. He complains about how these looks have prevented him from getting with women and, because of that, he decides to become a villain instead.

In this extract, Shakespeare uses many different techniques. Let’s focus on a few of them to see how he conveys meaning.

Now we must see how these techniques represent ideas.

Allusion to the Levitical Doctrine

The Levitical Doctrine states that “whosoever hath any blemish shall not offer the bread of his God” (Leviticus 21:17-24), highlighting the idea that physical deformities are representative of one’s ‘evil’ nature.

So, looking back at the soliloquy, we recognise that it is allusion to the Levitical Doctrine because of Shakespeare’s numerous references to Richard’s deformities and God’s curses. This is quite clear in lines like, “Cheated of feature by dissembling nature”.

This helps us understand the Elizabethan belief that an individual’s identity is predetermined by God and that, furthermore, Richard’s physical deformities are symbolic of his moral degeneracy.

The soliloquy slowly becomes more bitter as Richard begins to describe himself and his anger towards his physical deformities.

This bitter tone is created through the adjectives like “deformed” and unfinished” when he says he has been “Cheated of feature by dissembling nature / deformed, unfinish’d, sent before my time”. This creates harsh visual imagery, suggesting he was discarded by God. From this we recognise that his physical deformities are an exterior sign of his spiritual evil.

Step 4: Connect analysis to the Module

What does this mean for students studying Module A?

In this extract, we are introduced to Richard III and gain insight into his Machiavellian traits.

However, to connect it to the Module, we need to take a closer look at the influences of Shakespeare’s context on the text:

These aspects of the Elizabethan context influences Shakespeare’s text. From this, we see that:

Now, we need to look at Looking for Richard to compare the texts so that we have strong analysis to use when we write our T.E.E.L paragraph.

Step-by-step: How to analyse a passage from Looking for Richard

Let’s look at the parallel scene of the opening soliloquy in Looking for Richard, where Pacino (in character of Richard) and Kimball (in character of Clarence) are at the Cloisters rehearsal.

Step 1: Understand the plot of the passage

Here, both Pacino (Gloucester, soon to be Richard III) and Kimball (Bishop of Ely) have gone into their characters for the opening soliloquy. In this version, Richard whispers the soliloquy, pacing around. As Pacino deliver’s the soliloquy, there are a few intercuts to different scenes:

Finally, the shot returns to Richard walking towards his brother Clarence and stroking his face. As he walks, we see here that Richard’s facial expressions are full of conflict.

Pacino utilises many different techniques to create this scene, however, we will only focus on a few:

Now we must see how the technique represents ideas.

Here, Pacino has recreated a more psychologically complex Richard compared to Shakespeare’s dichotomous representation. We see that this pained face is symbolic of his moral dilemma between pursuing power or maintaining loyalty to his brother.

Intercut of Kimball’s commentary on the opening soliloquy

In between the rehearsal shots, Kimball describes the opening soliloquy as “[about] a sick king and everybody manoeuvring around”.

From this, we get a better understanding of the 20th century context.

Pacino highlights that Richard is not the only person who relies on manipulation and deceit to achieve his goals, instead, everyone is doing it. The only difference is that Richard is successful.

We can see that the 20th century promotion of ambition and achievements have influenced the modern portrayal of Richard.

Modern audiences are positioned by the film to understand and sympathise with Pacino’s Richard more than with earlier Shakespeare’s Richard.

Step 4: Connect analysis to the Module

What does this mean for students studying Module A?

Well, in this scene, we see Pacino and the cast recreate the opening soliloquy to make it more suitable to a 20th century audience.

Now, to connect it to the Module, we need to take a closer look at the influences of Pacino’s context on the text and compare it with those from the context of Shakespeare’s original text:

These aspects of the modern context influences Pacino’s recreation of Shakespeare’s text. We see that:

Now that we have analysed both Shakespeare’s and Pacino’s text, we need to discuss our findings in a way that satisfies the concern of the module. That is analysis that includes context, comparison and comment.

We will use the T.E.E.L structure that Matrix students are taught to use in their Band 6 responses to present our evidence and its discussion.

The link is especially important because connects the techniques and analysis back to the concerns of the Module.

Okay, let’s look at an example of a Band 6 response.