Read this article to learn about continuous random variables and practice with concept check questions!

In this article we’ll discuss:

In today’s Big Data world, an understanding of statistics is particularly important to make the best use of the data collected. With such large volumes of data, individual data points can be approximated by random variables, allowing for a simplification of modelling that can be used to sense-check a course of action.

This blog article will explain Continuous Random Variables and several techniques that can be used to analyse a set of continuous random variables.

This resource will help by supplementing the new Year 12 Syllabus to provide an introduction or a refresher on the topic of Continuous Random Variables.

In Year 11, you would have learnt about:

You should also be comfortable with practical applications of calculus, including

These concepts and terms will be extended upon in the following sections about continuous random variables.

What is a continuous random variable?

In Year 11, you constructed probability distribution tables for numerical, but discrete, random variables.

This makes it difficult to calculate statistics using probability distribution tables, since there are infinite possible values!

Fortunately, you have already learnt some tools with dealing with infinite divisions, namely Calculus.

We can also group various ranges of values in bins to produce a frequency histogram.

Histograms are one way to simplify continuous random variables.

In a histogram, data points are sorted into various bins, and those bins are then graphed.

From this tally we can generate the histogram below:

You may be asked to read a histogram to determine the relative percentage of values that fall within a given range; or asked to construct a histogram from a given data set.

Want to test your knowledge of continuous random variables?

A worksheet to test your Continuous Random Variables knowledge with questions across 4 levels of difficulty. 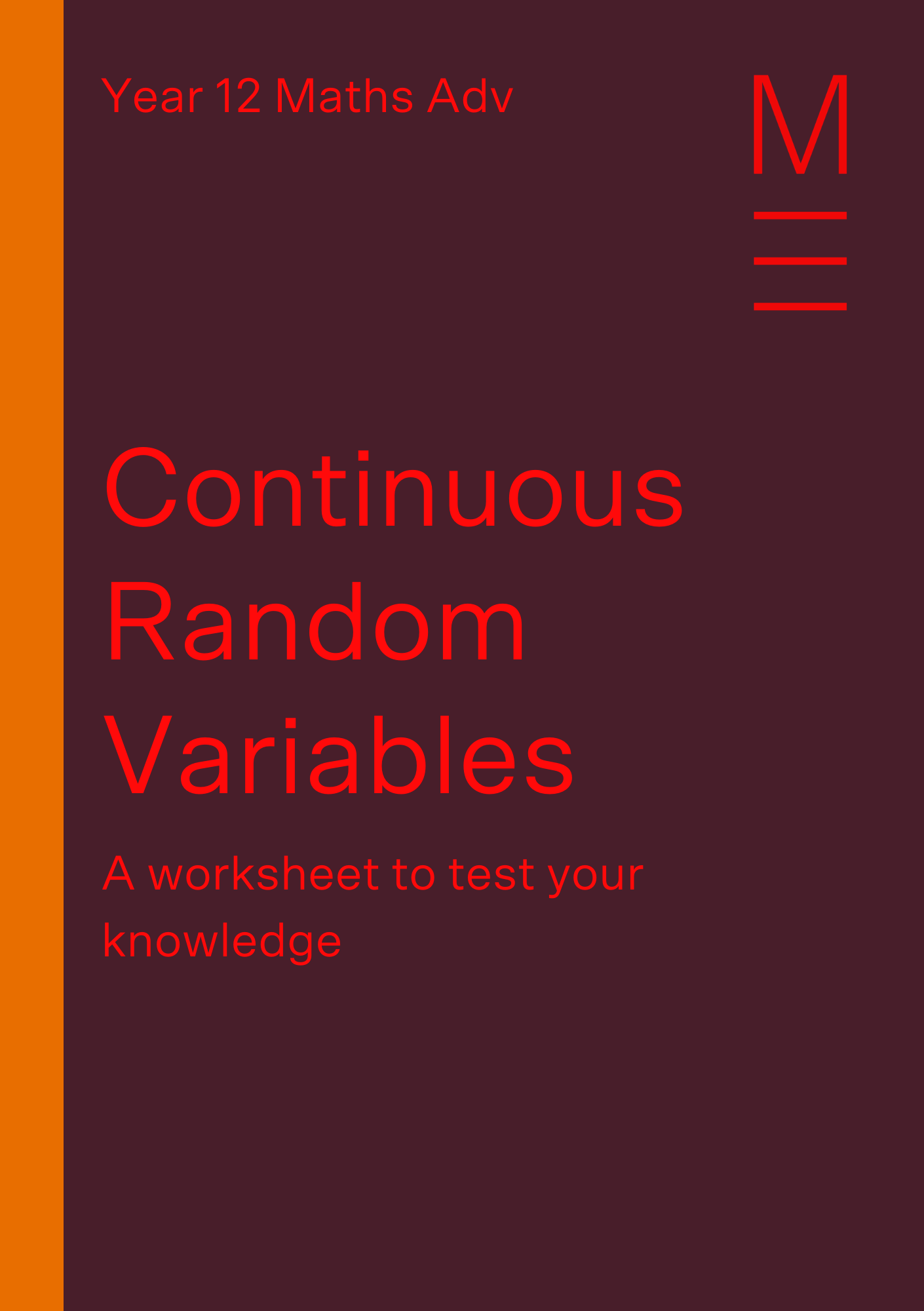 When the number of data points gets larger, it may become infeasible to count how many values are in each group.

Additionally, even though an event is random, there may be rules that govern the outcome of the event.

This is formalised as a probability density function \( f(x) \), which is defined as:

There are two important properties you need to know about the probability density function.

Secondly, the probability of an event occurring must not be negative, so all values of \( f(x) \geq 0 \).

The shape and definition of \( f(x) \) can vary greatly but will be specified in the question.

A uniform probability distribution can be represented as a piecewise function:

We can interpret the probability density function to derive some useful results.

Consider a large population of rabbits, whose ear length is given by some probability distribution function \( f(x) \).

If we are asked, what is the probability that a selected rabbit has an ear length of under 10cm, we could express our answer in terms of the probability density function:

What if we were asked to find the mode of the ear lengths?

Recall that the mode of a distribution is the most likely value.

However, since it is incredibly unlikely that even two rabbits have the exact same ear length as the range is continuous, we need to redefine our mode.

Thus, the mode of a continuous random distribution is the value of \( x \) for which the function \( f(x) \) is maximised.

This can be found by solving for \( f'(x) = 0 \), as per the standard method of solving for the maximum value of a function.

If you were asked to find the median value of the continuous random variable, you would need to find the value below which 50% of the data points lie.

However, our probability distribution function only allows us to answer questions which take a value and gives us a proportion, by setting the bounds of the integral \( \int_{a}^{b} f(x) dx \).

To answer the median question, then, we need to create a cumulative distribution.

The cumulative distribution function is the proportion of values that are lower than a certain value \( X = v \).

This can be found by changing the variable in our integral to the bounds of the integral,

Additionally, a cumulative distribution function will never be decreasing, as the value at any point represents the total proportion of values up to and including those less than it.

Given a cumulative distribution function, we can find the median by:

In the above example, the median is 6.

We can similarly find other percentiles by drawing other horizontal lines and reading off the x-axis.

1. Consider the following histogram describing the intensity of solar flares over a period. The histogram has been normalised to show probability values rather than the total count.

a. What is the probability that the measured intensity is below 4?

b. What is the probability that the measured intensity is above 6?

2. Using the above histogram, a scientist makes the following statements. Which are valid?

b. “The median solar flare intensity is between 2 and 4.”

3. Determine whether the functions below are valid probability distribution functions:

4. A [phenomenon] can be described using the following probability distribution function:

What proportion of samples taken will be:

5. A cumulative distribution function is provided below:

a. What is the median of the distribution?

b. What is the 25th percentile?

c. What is the 75th percentile?

d. The function is always concave up between 0 and 1. What is the mode?

a. This statement is not correct as we cannot know the distribution of a part of the samples.

b. This statement is true, since the median is defined at the point where half the values (0.5) are below; and this lies somewhere between 2 and 4 (although we don’t know exactly).

b. Yes. This is a uniform distribution between 4 and 9.

c. No, this is not a valid probability distribution function, as although it integrates to 1, there are negative probabilities which are not allowed.

d. Yes. This is a variant on a common probability distribution function in physics known as the Dirac delta function.

a. 0, since the probability distribution function is 0 for all values below 2.

A worksheet to test your Continuous Random Variables knowledge with questions across 4 levels of difficulty.