This is your ultimate Biology Exam Revision Companion for Module 8: Non-Infectious Diseases!

During your study of it, you will explore various technologies and their uses in managing non-infectious diseases and disorders. In this guide, we will also cover the requirements for conducting an epidemiological study.

The topics for this module include:

Homeostasis is the process of maintaining a relatively stable internal environment in response to a change (stimulus).

The stimulus response pathway counteracts the stimulus and consists of: 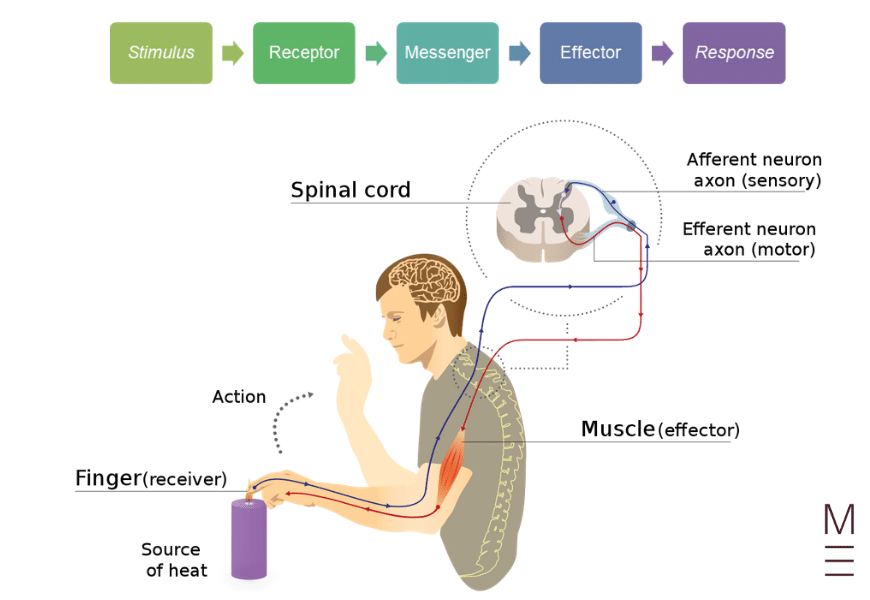 Most stimulus-response systems are regulated by negative feedback loops.

The example below shows the negative feedback loop used for regulation of temperature.

You will go through more details and examples during your class. 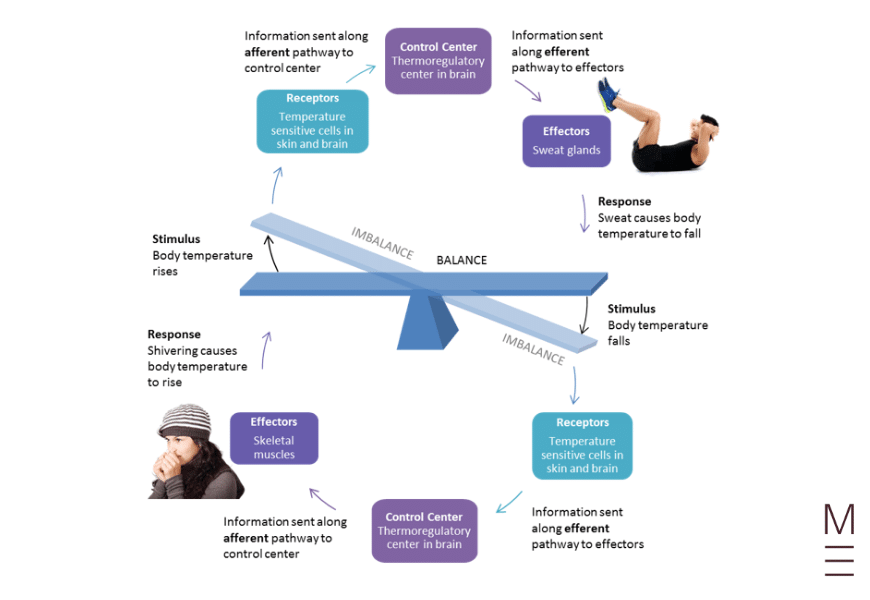 The CNS is comprised of the brain and spinal cord, whereas, the PNS includes all the peripheral neurons that reach the extremities.

Hormonal coordination by the Endocrine system also contributes to maintaining homeostasis by releasing hormones such as ADH and Aldosterone that act as effectors.

ADH is secreted by the pituitary gland when blood volume is low.

It acts on the collecting duct of the kidney to make it more permeable to water to increase water reabsorption leading to an increase in blood volume and blood pressure.

Aldosterone is secreted by the Adrenal gland when blood pressure is low. It acts on the distal tubule of the kidney to make it more permeable to sodium ions.

This increases the reabsorption of sodium into the blood causing an increase in blood pressure.

Blood volume also increases due to water reabsorption by osmosis. 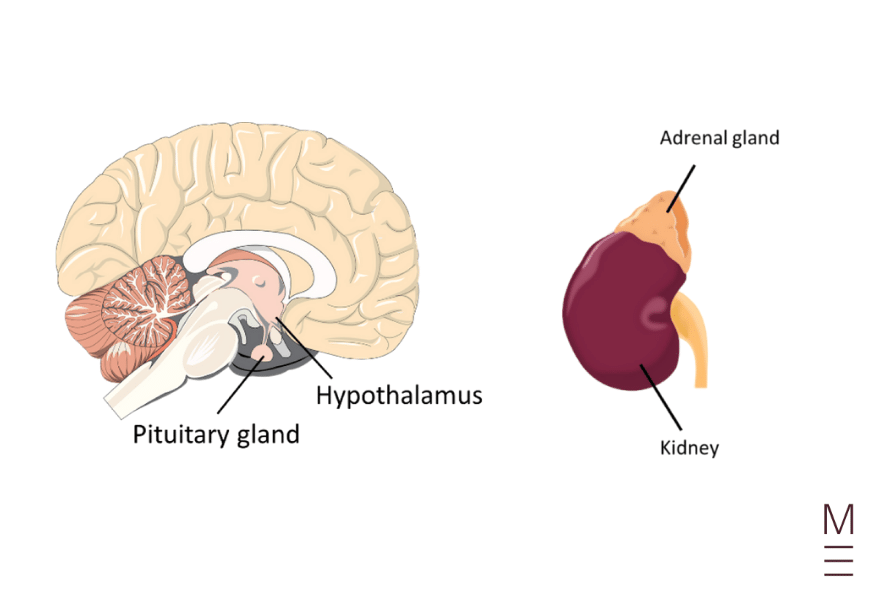 This module examines examples of adaptations for homeostasis in plants and animals.

Endotherms are warm-blooded organisms such as mammals that maintain homeostasis through behavioural, structural and physiological adaptations.

In humans, for example, temperature regulation is achieved by sweating to lose excess heat and shivering to increase body temperature when it is cold.

These are examples of physiological adaptations.

Plants also use various mechanisms to maintain homeostasis of water.

Some mechanisms include light coloured leaves to reflect sunlight, vertical hanging leaves to reduce the surface area exposed to sunlight or fine hairs that trap water. 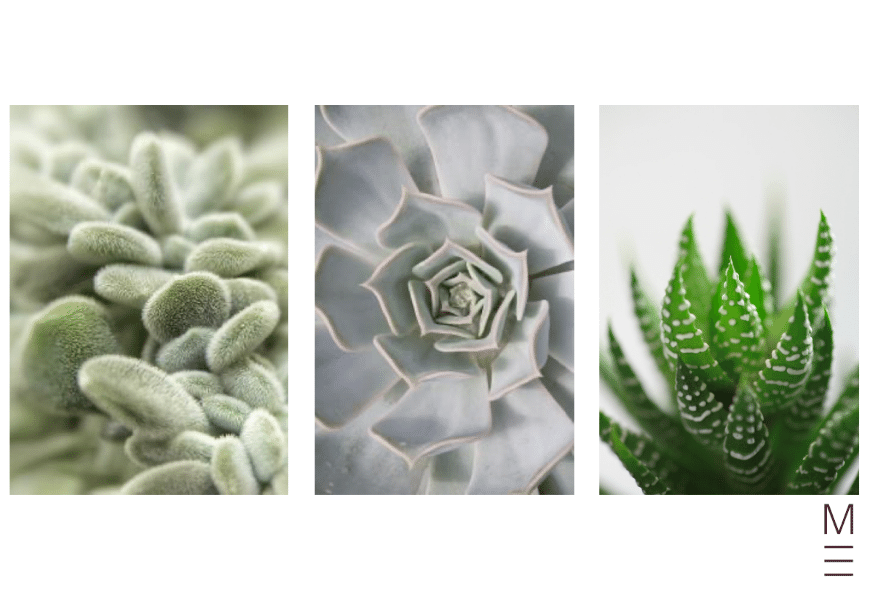 Want to make a lifestyle choice that will help your HSC Biology marks?

Our Biology HSC Prep course will save you time and stress while still providing you with the HSC expert teaching you expect from Matrix Education. Learn more.

Non-infectious diseases are diseases that cannot be transmitted between individuals (except through inheritance).

The various risk factors that can contribute to developing non-infectious disease are outlined below.

While a risk factor can increase the chance of developing non-infectious disease, it is not guaranteed to cause disease. 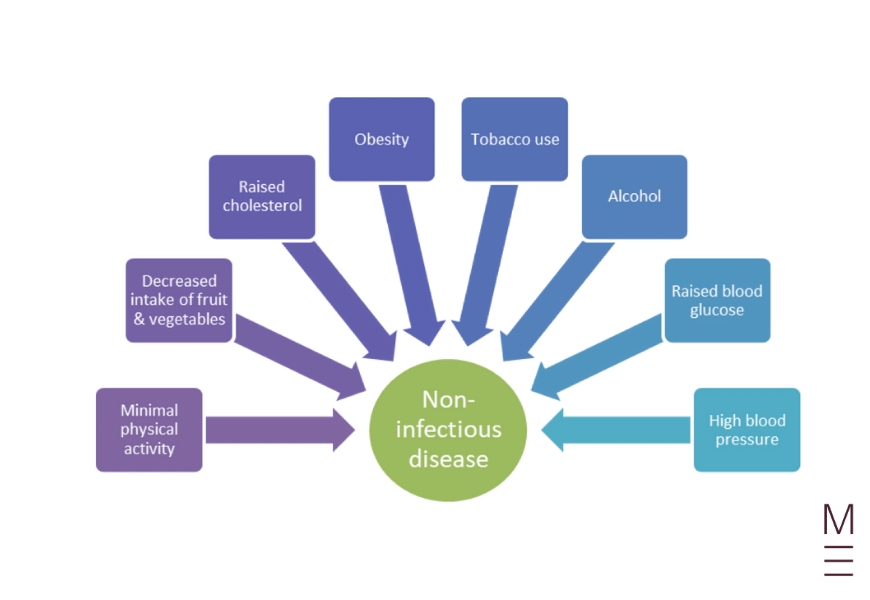 There are various types of non-infectious disease, these include genetic, environmental, nutritional, and cancer.

Genetic diseases can be passed down through inheritance and are a result of mutations in DNA that lead to the production of altered or non-functional proteins.

Huntington’s disease is caused by a mutation on a gene that codes for Huntingtin protein. The mutation causes extra copies of the glutamine amino acid to be added to the protein.

This affects nerve cells and brain signalling which produces symptoms such as mood swings, lack of coordination and jerky movements. 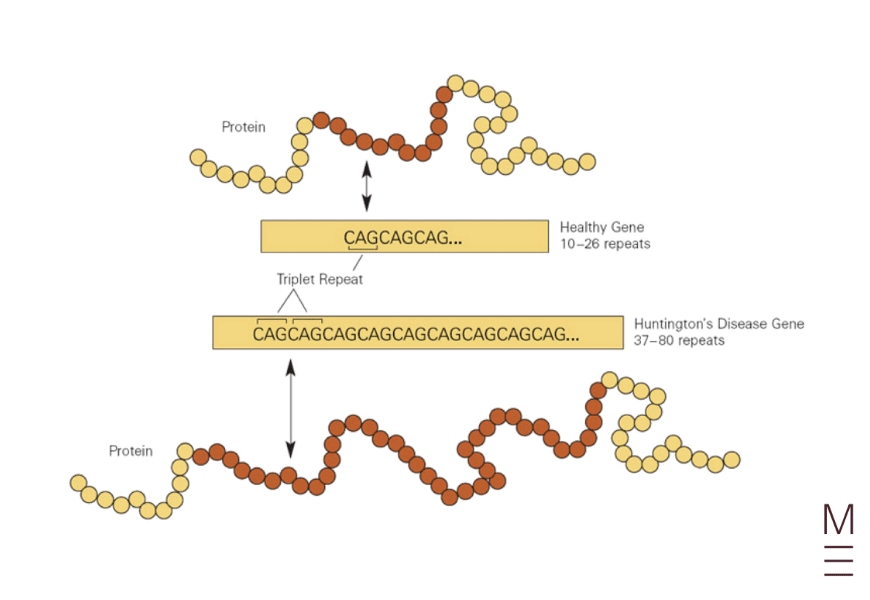 Environmental diseases result from the exposure to natural or synthetic hazards found in the environment.

Mercury and Lead poisoning are common examples of environmental diseases.

Mercury is a heavy metal that is liquid at room temperature. Exposure to Mercury occurs from sources such as amalgam fillings or eating fish contaminated with Mercury.

In Japan, the city of Minamata had many cases of mercury poisoning as a result of eating fish from local contaminated water sources.

Most nutritional diseases occur due to lack of a particular vitamin in the diet or the body’s inability to absorb a vitamin.

For example, Rickets is a disease caused by Vitamin D deficiency.

Vitamin D is produced in the skin when exposed to direct sunlight and is essential for calcium absorption in bones. Lack of Vitamin D during growth leads to distortion of leg bones in children. 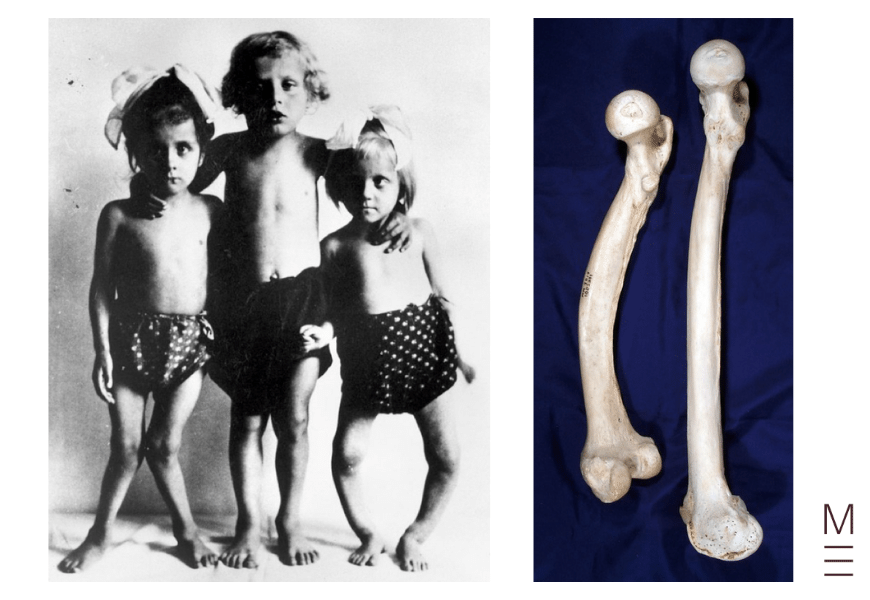 Cancer is caused by a mutation in one of the genes that control cell division namely the proto-oncogenes or tumour suppressor genes which leads to uncontrolled cell division.

The mutation can be due to environmental factors such as smoking which causes lung cancer or exposure to UV light that leads to Melanoma.

Some bacteria or viruses cause mutations that result in cancer, for example, Human Papilloma Virus (HPV) infection can result in cervical cancer.

Epidemiological studies are used to analyse patterns of disease including distribution and frequency.

In this module, we will focus on epidemiological studies of non-infectious diseases.

The incidence rate is defined as the number of new cases of a disease during a given time period, while the prevalence is the proportion of a population affected by the disease at any given time.

Mortality refers to death rates as a result of acquiring the disease.

Using this data, a plan for the control, prevention and treatment of disease can be implemented.

Epidemiological studies identify risk factors and relationships, but they do not aim to determine the exact mechanism by which the risk factor causes the disease.

The diagram below is part of an epidemiological showing that as the rate of cigarette consumption increased in males so did the rate of lung cancer deaths, suggesting that there is a relationship between smoking and lung cancer.

The 20-year lag between consumption and lung cancer highlights how long-term studies can be important for detecting patterns. 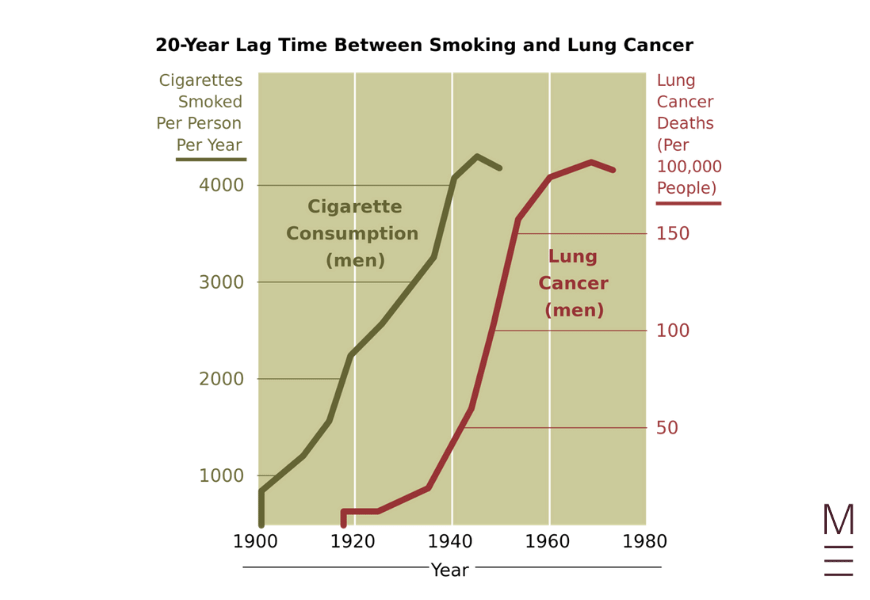 Public health programs can be used to reduce the incidence of non-infectious diseases.

An example includes advertising campaigns that increase awareness and promote lifestyle changes to prevent the incidence of lung cancer caused by smoking. 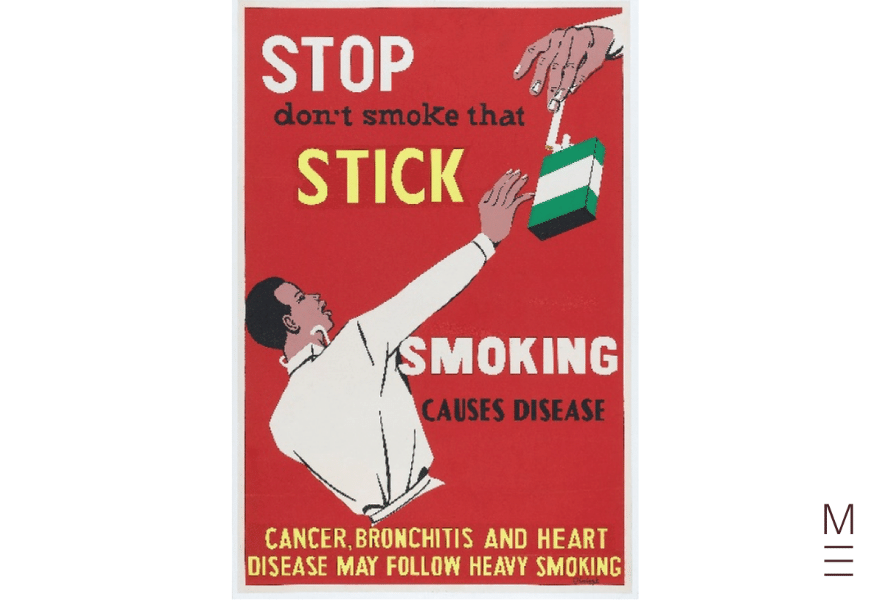 For some genetic diseases, genetic engineering methods such as gene therapy can be used to replace or alter the defective gene.

Currently, gene therapy can only be used to treat diseases caused by a single gene defect such as Cystic Fibrosis (shown below).

In the future, it may be possible to edit genes in the gamete or embryo to prevent onset of the disease in the first place. 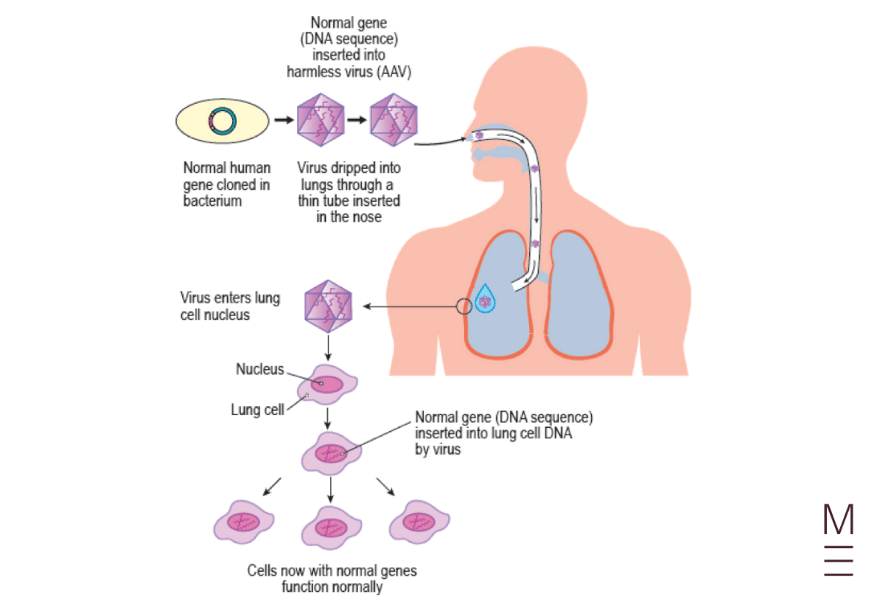 Technologies can be used to alleviate and manage disorders such as hearing loss, visual disorders and loss of kidney function.

The internal structures of the ear such as the tympanic membrane and ossicles convert sound waves into mechanical vibrations which are then transmitted to the cochlea.

Within the cochlea lies the organ of corti which converts the vibrations into electrochemical signals that are sent to the brain and interpreted as sound.

Hearing loss is caused by damage to these internal structures. 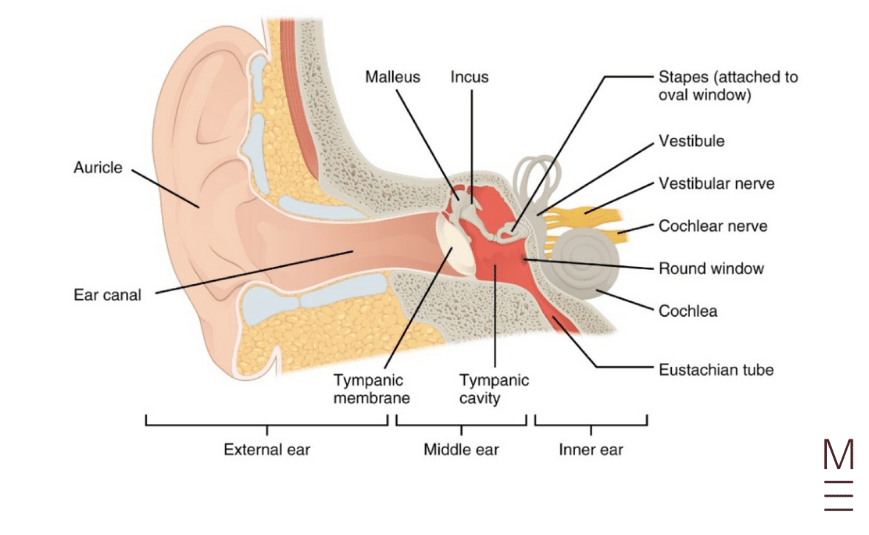 There are several types of hearing loss including:

Some of these hearing problems can be managed using hearing aids or implants.

Hearing aids work by simply detecting and amplifying sound vibrations which are played back into the ear canal. This device only works when there is mild sensorineural hearing loss.

Middle ear implants are surgically implanted and work by directly moving the three ossicle bones in the middle ear to transmit the sound signal.

The bone-anchored hearing aid is a different type of implant that produces vibrations in the bone of the skull which travel to the cochlea to be interpreted as sound.

The cochlear implant bypasses the outer and middle ear entirely by directly stimulating the auditory nerve (shown below). 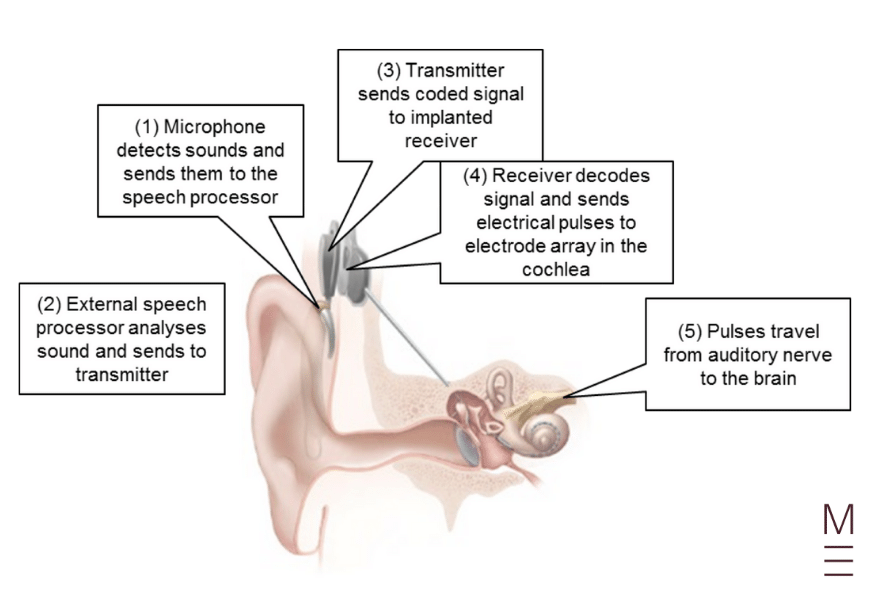 The eye detects light to enable us to visualise objects.

The retina of the eye contains photoreceptor cells called rods and cones, rods allow for the detection of light and shadow while cones allow us to detect colours.

Eye disorders include myopia and hyperopia.

These methods change the refraction of light before it hits the retina.

Hyperopia is treated using a convex lens that causes light to converge, whereas, a concave lens is used for Myopia to diverge light.

This allows for a clear focused image to be produced in the brain. 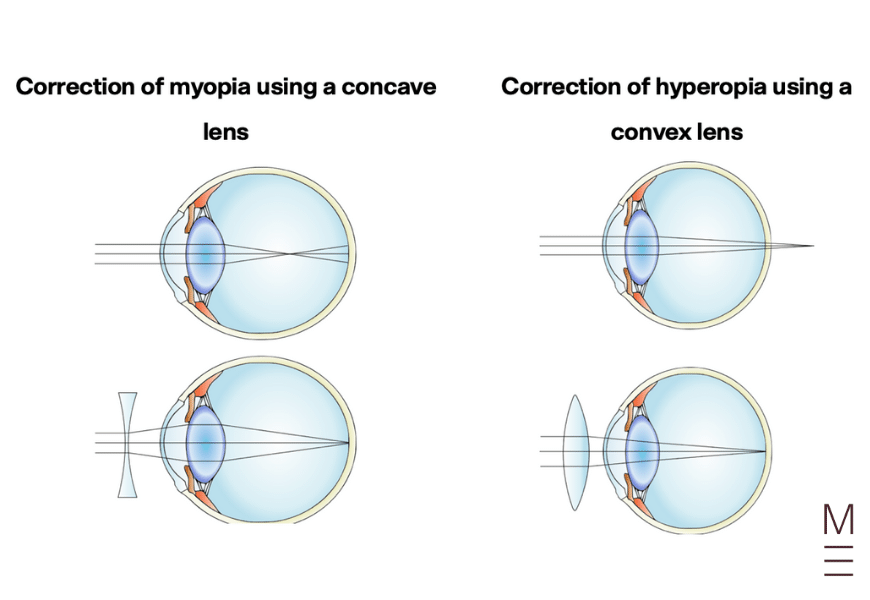 The kidney functions to filter toxic nitrogenous wastes out of the blood to be excreted in the form of urine.

It also regulates salt and water levels through osmoregulation to maintain homeostasis.

Kidney damage caused by infection, genetics, or injury can lead to loss of kidney function.

There are two types of dialysis:

In haemodialysis, the patient’s blood is pumped through a dialysis machine to an external filtration system before it is returned to the body. 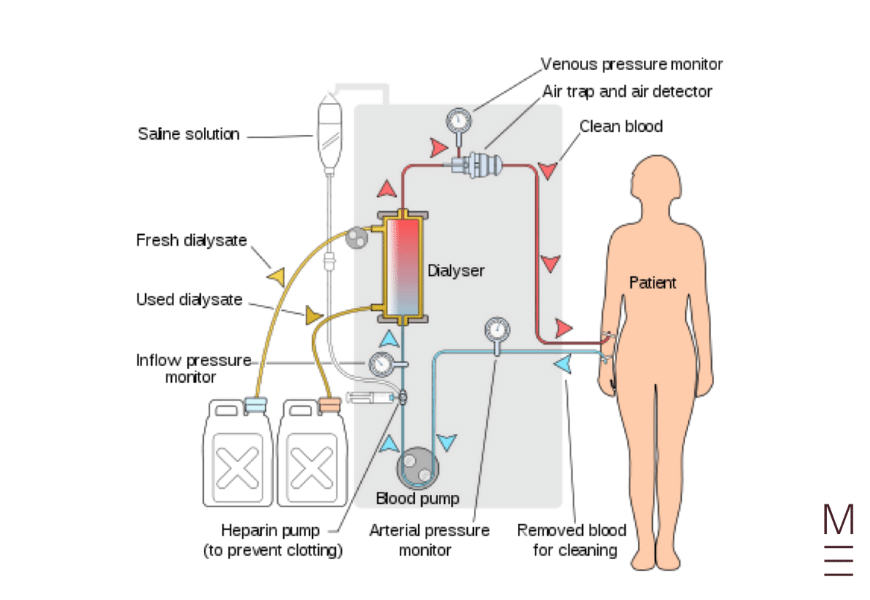 Peritoneal dialysis is an alternative method that uses the lining of the abdominal cavity (peritoneum) as a filtration membrane instead.

Dialysate is pumped into the body cavity and nitrogenous waste diffuses into it overnight.

While technologies are useful in managing disorders to improve a patient’s independence and quality of life, there are limitations to these methods including cost, availability, effectiveness and ease of use.