Good marks aren't hereditary, they're earned! Read this Beginner's Guide to Biology to get a cellular understanding of heredity.

Studying heredity is vital to understanding how living organisms reproduce and pass their characteristics on to their offspring. It also helps us understand what makes us unique from one another in general.

In this Beginner’s Guide, we will cover Module 5: Heredity and its topics:

Reproduction is the making of a new offspring via sexual or asexual means. Sexual reproduction occurs mainly in animals and is the process of fertilisation of an egg by a sperm to form an offspring. The fertilisation can happen internally (such as in humans) or externally (such as in fish). Asexual reproduction occurs predominantly in plants and bacteria and requires only one individual for the making of an identical copy of itself.

The summary of these process are as follows:

In mammals specifically, a number of hormones are involved in pregnancy and birth of the offspring: 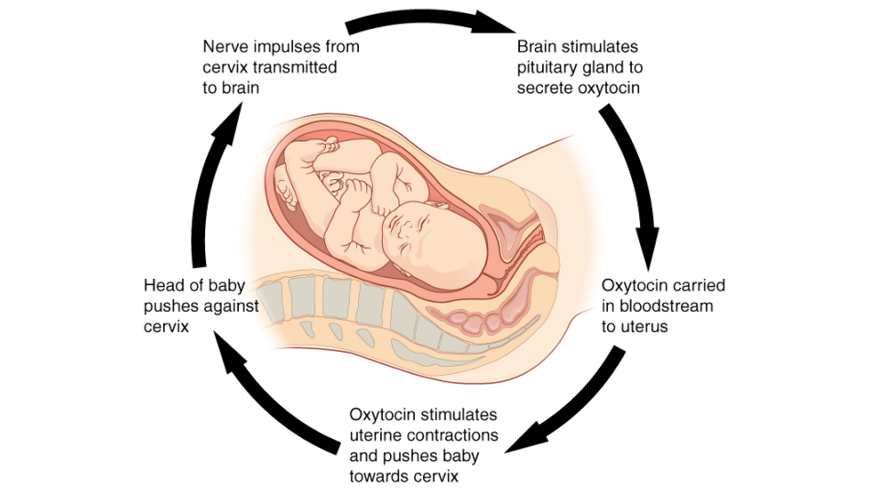 Cell Replication is the other important aspect for survival and continuity of living organisms. This is the process of cell division in order to make new cells and occurs through mitosis and meiosis.

Mitosis is the process of making new body (somatic) cells for the purpose of growth and repair. In humans, a parent cell divides into two genetically IDENTICAL Diploid daughter cells that each contain 46 chromosomes.

Meiosis produces sex cells (gametes) such as sperm and egg for the purpose of sexual reproduction. In humans, the parent cell divides into four genetically UNIQUE haploid daughter cells each containing 23 chromosomes. Each daughter cell is unique from the parent cell due to the various process that occur during meiosis. These processes include crossing-over, random segregation and independent assortment. These processes are vital in producing genetic variability in offspring to ensure their continuity (we will cover the processes in Topic 3). The stages of mitosis and meiosis are summarised in the diagram below: 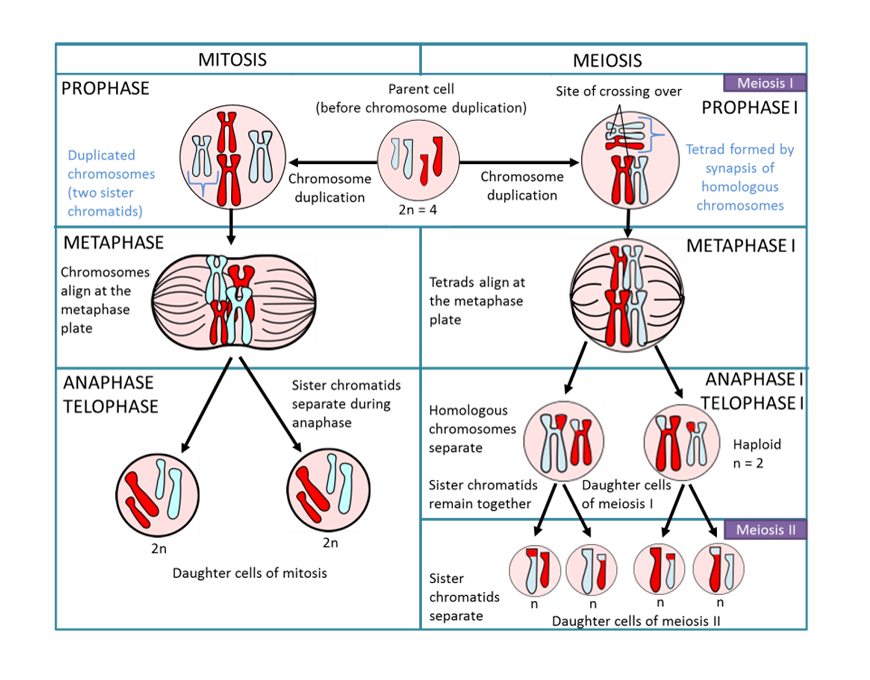 Don’t leave it to the last minute, get expert help now! Learn more about our Matrix+ Biology HSC Prep Course.

DNA (Deoxyribonucleic Acid) is a large molecule containing all the genetic material necessary to pass characteristics onto the offspring. It contains segments called genes that are like recipes for making polypeptides (that will become proteins). These proteins are required for cellular functions inside the organism. This DNA can be packed into larger structures called chromosomes (the structures passed into daughter cells mentioned earlier).

DNA is found in both eukaryotic and prokaryotic cells, without DNA life would not exist!

DNA is made up of three repeating subunits that combine to form a double helix structure. These subunits are sugar (deoxyribose), a phosphate group and nitrogenous bases (adenine which pairs with thymine and guanine which pairs with cytosine). The sugar and phosphate linkage is what makes the “backbone” of the double helix, whereas the pairing of the nitrogenous bases in the middle of the ladder is what forms the “rungs” of the ladder holding the double helix in place.

This is shown below: 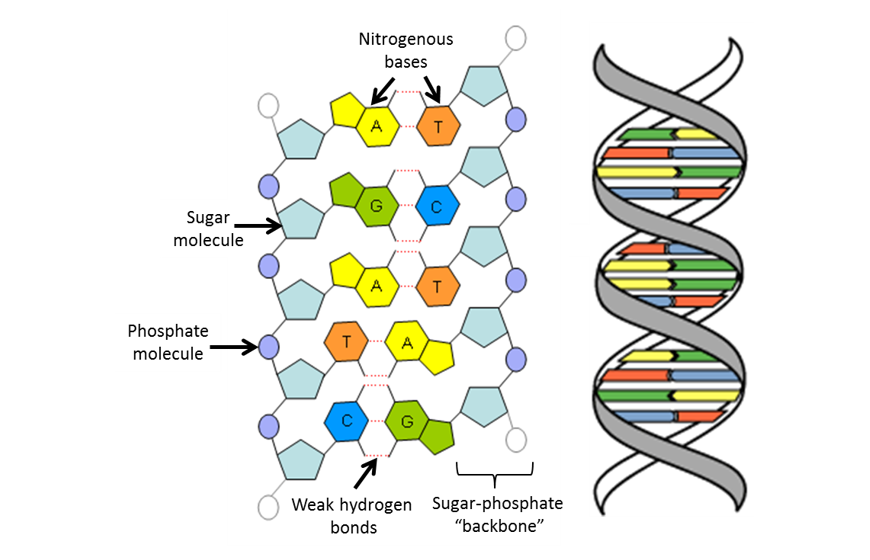 Polypeptide synthesis in eukaryotes and prokaryotes is the process by which a gene is expressed to make polypeptide chains that are folded into a protein. The process involves:

Transcription is the copying of a gene onto a portable single strand transcript called mRNA. This takes place in the cell nucleus.

Translation occurs in the cytoplasm of the cell. It is the process where the mRNA transcript is deciphered to produce a polypeptide chain. The process is split into three stages:

The polypeptide is still non-functional at this final step and needs be folded into a 3D structure to start functioning as a protein! You will learn more about protein structure and types in this course.

Topic 3: Genetic Variation and Inheritance Pattern in a Population

Gamete formation (meiosis)produces gametes that are genetically unique from one another resulting in variation in the offspring. This is caused by – crossing over, random segregation and independent assortment. 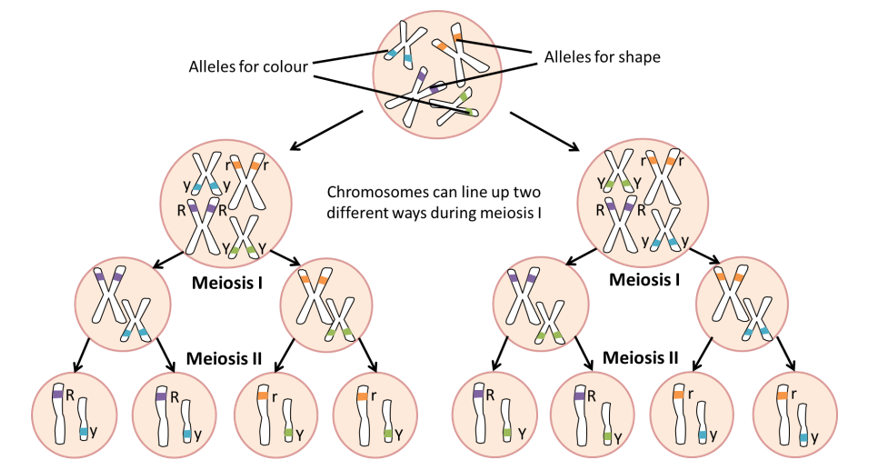 The process of fertilisation is random and since each gamete is genetically unique, the union of sperm and egg results in an even greater genetic variability in the offspring.

A permanent change to the DNA can occur during meiosis and create a new characteristic, affecting the phenotype of the offspring.

Inheritance patterns depict how traits are passed onto the offspring through genes. Mendelian genetics illustrates the inheritance of characteristics controlled by a simple dominant/recessive relationship. In this case, there are two variations of a gene called alleles, allele expression is dependent on whether it is dominant or recessive affecting the phenotype of the offspring accordingly.

This topic depicts allele combinations and their respective genotype and phenotype ratios using Punnett squares. You will go through examples of Punnett squares in class so you can have a better understanding of constructing them. Other inheritance types occurring across a population can follow more complex patterns including:

We can also recognise inheritance patterns through use of pedigrees which are family tree diagrams that show genetic relationships between individuals across generations. Pedigrees represent traits that are autosomal or sex-linked. This module teaches you how to construct pedigrees so you will need to familiarise yourself with the standard symbols used as shown below.

There are four main types of inheritance patterns detected by pedigrees:

This is where the trait SKIPS a generation (such as in generation II below). Another clue to look for is that unaffected parents can have affected children.

This is where the trait affects EVERY generation. Besides that, affected parents can have unaffected children.

This type of trait affects more males than females as shown below.

This trait involves an affected father passing the trait to ALL his daughters only. This type of trait is very rare, however.

Technologies can be used to examine population inheritance patterns and identify individuals through regions in their DNA that make each individual unique. One type of mutation that makes us unique is called Single Nucleotide Polymorphism (SNP).

During DNA replication, SNP involves a natural mutation of a single base in the polypeptide sequences that ultimately affects the phenotype.

In this module, you will learn about the steps involved in various technologies that use DNA to identify individuals and to reflect population inheritance patterns.

You will go through examples to try to determine the suspect of a crime!