Keep in mind that these answers were not written under exam conditions and may be longer than required.

(a) A pathogen can pass from person to person through direct transmission. This involves physical contact between individuals such coughing or sneezing directly onto someone or shaking hands.

(b) No cells: Virus OR prion

Since there are three phenotypes, and one (violet) is in between the other two (white and dark purple) this must be incomplete dominance. The violet offspring would be heterozygous and the others would be homozygous.

If two violet eggplants are crossed:

(a) Pollen is manually transferred from the male anther to the female stigma. This can be achieved by transferring pollen using a paintbrush or by removing the stamens and rubbing them on the stigma of the other flower. 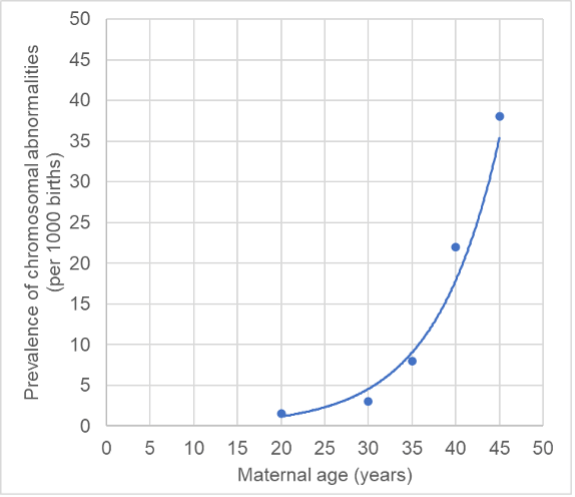 (b) From the age of 20, the prevalence of chromosomal abnormalities increases exponentially as the age of the mother increases.

In asexual reproduction the parent undergoes mitosis (or binary fission) in order to produce offspring. An example for both animals and plants is budding, where the offspring grows on the body of the parent and then breaks away to become independent. The result of asexual reproduction is usually offspring that are genetically identical clones of the parent, resulting in no genetic variation. In rare cases, mutation could occur in the first cell of the forming offspring that results in genetic variation.

Sexual reproduction involves the fusing of male sperm and female egg to combine chromosomes from both parents. The formation of gametes through meiosis means that the gametes are genetically unique. It is then random as to which genetically unique egg and sperm meet during fertilisation.

Crossing over occurs in prophase I of meiosis and involves the swapping of chromosome segments between the maternal and paternal chromosomes of a homologous pair. This results in new combinations of alleles in the gametes. During metaphase I of meiosis, homologous pairs line up randomly on the metaphase plate, and it is random as to which maternal and paternal chromosomes are allocated to each daughter cell (random segregation). This results in unique combinations of chromosomes in the gametes.

Note: there are many ways to answer this question!

2. 3 agar plates are each inoculated with a different bacterium using a disposable swab and labelled e.g., E. coli, S. aureus and S. pyogenes.

3. Using sterilised tweezers, 5 Paper circles are each dipped into one of the 5 Methylglyoxal concentrations and placed on each inoculated agar plate. One paper is not dipped as a control.

4. A control plate is set up with agar that has not been inoculated and no paper disks.

5. All agar plates are placed in an incubator at 37oC for 5 days.

6. After 5 days the diameter of bacterial inhibition around the paper is recorded for each plate.

7. Steps 2-6 should be repeated 5 times. For safety, inoculated agar plates must be immediately sealed with sticky tape and never opened again to avoid exposure to pathogens. At the end of the experiment used agar plates should be autoclaved or placed in two Ziplock bags before disposal. 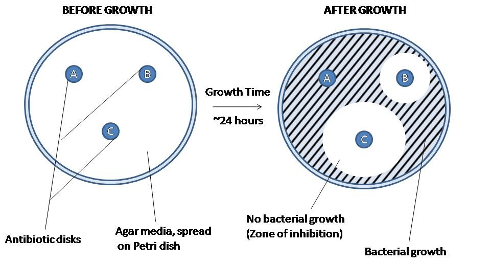 The incidence of cervical cancer in Australian women was declining before 1991, however the overall rate of decline increased between 1991 and 2002 after the national screening program was introduced. Detection of pre-cancerous cells on the cervix means infected cells can be removed before becoming cancerous, which led to a steep decline in cervical cancer incidence.

Since 2002 the incidence of cervical cancer has been consistent at around 7 per 100 000 women. The HPV vaccine for girls was introduced in 2007 and 2013 for boys, but since infection may not take place until many years after vaccination and it takes around 10 years for cervical cancer to develop after infection, long term data is needed to determine whether this vaccination campaign has successfully reduced incidence.

(a) Model 2. (DNA replication is semi conservative, each copy has one original strand and one new strand.)

(b) The enzyme helicase unwinds the DNA by breaking the hydrogen bonds between complimentary bases. DNA polymerase enzymes run along each strand of the DNA adding complimentary nucleotides. The end result is two double stranded DNA molecules that are identical to the original strand.

(a) Bt cotton was introduced in 2002 and cotton yield increased as the percentage of Bt cotton grown increased. The pesticide produced by Bt cotton would decrease damage to the plant caused by the bollworm pest and increase the amount of cotton harvested.

(b) The data indicates that Bt cotton produces an effective Bollworm insecticide. The data in the second graph shows that that the tonnes of bollworm insecticide were gradually reduced to almost 0 after Bt cotton became common after 2005. The reduction in the use of this pesticide means less cost and effort for the cotton farmer. This also means less insecticide leaching into the environment and poisoning non-target species, potentially reducing species diversity.

However, while cotton yield is still above 500 kg/ha compared in 2013 to above 300 kg/ha before Bt cotton was introduced, the total amount of insecticide used per year is also higher as hemipteran insecticide use increased to over 10 000 tonnes per year. So while Bt cotton is an effective method of control for Bollworm, it is not effective at controlling Hemipteran pests.

Some regions of the world such as western Europe, north America and Japan have the mosquito vector (map 1) but no malaria (map 2). A possible reason for this is that malaria has been eliminated from the region so there are no infected individuals to pass on the disease/pathogen.

These regions are likely to have accessibility of medical facilities and pharmaceutical treatment so that there is early detection and treatment of infected individuals. Better quarantine of infected individuals ensures that they cannot pass on the pathogen. There is also likely to be better mosquito population control e.g., management of stagnant water (mosquito breeding areas), and prevention of bites through bed nets, long sleeves, and repellent.

Conversely some regions such as the West coast of south America, parts of northern and southern Africa, Arabian Peninsula and parts of China and Mongolia have malaria (map 2) even though the mosquito vector is not present (map 1). It is possible that infected individuals are moving into these regions from nearby infected regions due to high levels of travel and migration from these regions.

(a) (i) While the number or women in each category was different, the sample size was large enough to confidently calculate mortality. Covering 29 health districts is helpful to avoid bias from environmental conditions that are only found in one health district. Non-smoker women with non-smoker husbands act as an important control group because this group demonstrates that 8.7% of lung cancer is not actually related to smoking in the household. 14 years is a significant time for a long-term study, but 20 years or longer would be an improvement as there is often a significant lag between smoke exposure and lung cancer. Overall, the study is valid and provides important data on the link between cigarette smoke and lung cancer mortality rate in women.

(ii) Any mutation (permanent change) to the DNA sequence of the EGFR gene will also be copied onto the mRNA. Any change to the codons will also change the amino acids delivered by the tRNA that form the polypeptide. A change to the amino acids can change the bonds that form between amino acids that give the protein structure. A change to structure will affect function of the protein, particularly if the receptor or the active site of the enzyme changes shape and the protein cannot bind to the substrate. This will prevent the protein from doing its job to regulate cell division. Unregulated cell division can result in cancer.

Normally a negative feedback loop exists where follicle stimulation hormone (FH) and luteinising hormone (LH) are released by the brain and received by the testes. Sertoli cells in the testes respond by increasing sperm production and producing inhibin, while Leydig cells respond by increasing testosterone production. The resulting production of testosterone and inhibin prevent further FSH and LH release until sperm or testosterone levels become low (and create a stimulus). If a male athlete continuously takes anabolic steroids (testosterone) this will result in an inhibition signal to be sent to the hypothalamus and the anterior pituitary. This will prevent the release of FSH and LH which will prevent sperm production in the testes. Over time, the athlete may find that they become infertile, and the size of the testes may decrease.

Mutation (permanent change to DNA) is the only mechanism that creates new alleles in a population. It is likely that the allele that causes increased inflammation first appeared in the human population as a mutation.

Genetic drift occurs in small, isolated populations. Random events (not selection pressures) cause the frequency of alleles in the population to change. It is possible that the South Asian population was isolated for some time and genetic drift allowed the allele to become more common in this population.

Gene flow occurs when new alleles are introduced to a population through migration and interbreeding from a different population. It is possible that the allele first appeared in the south Asian population and was introduced to the other populations (such as Europe 15.1 %) through gene flow.

The Top 5 Tips To Max Out Your Chemistry Trial Marks

Avishek’s Hacks: How to Beat Your Lack of HSC Motivation