Unsure about the difference between analysing 'Othello' for the Common Module vs analysing it for Module B? Well, this article will show you everything you need to know!

Do you want to see what a Band 6 essay looks like?

Read an exemplary response with annotations for an HSC expert! 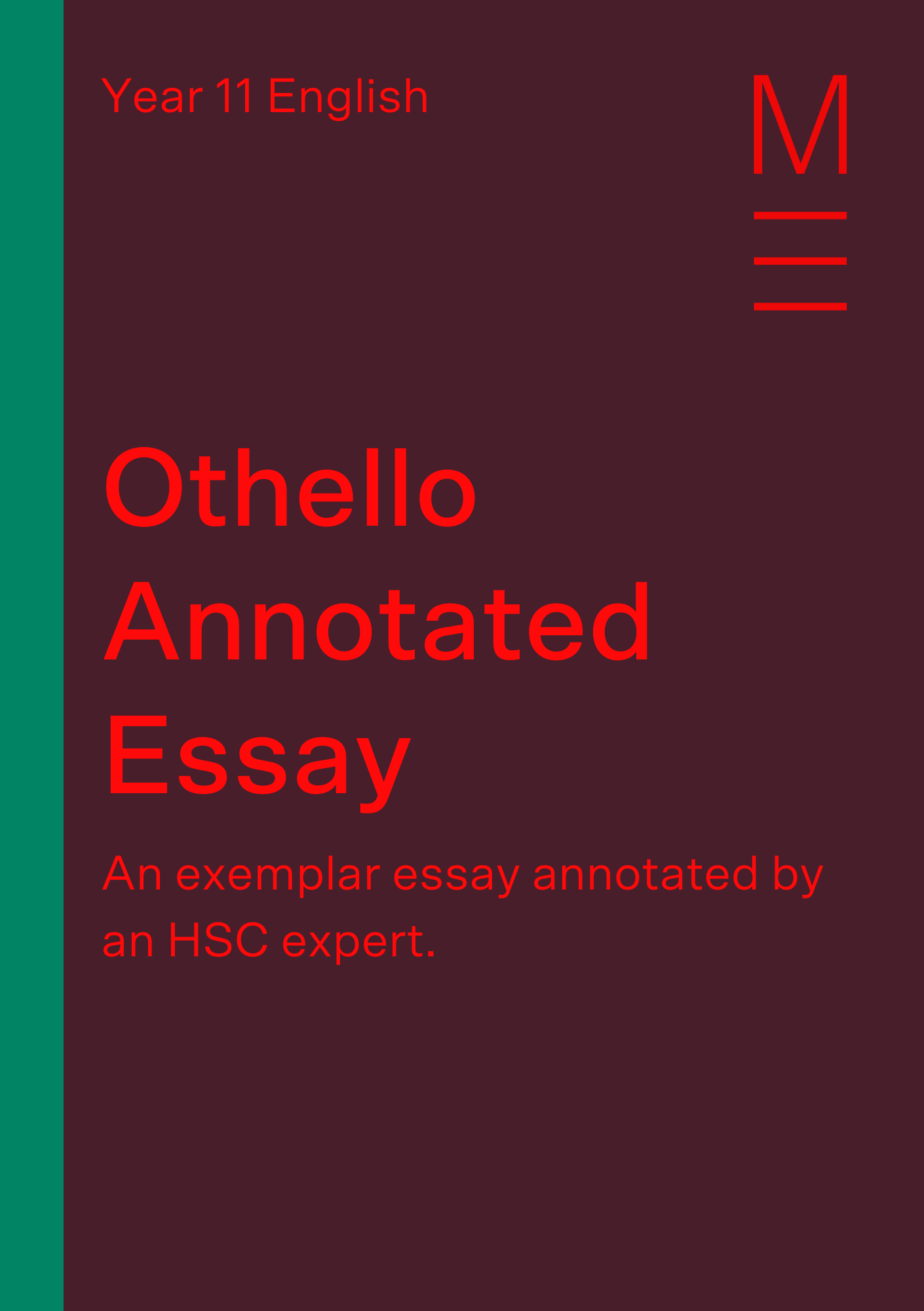 Why do I need to link my ‘Othello’ analysis to the module?

The modules are an indication of what you need to focus on when you analyse Othello. They describe a way of analysing texts.

It’s like using different camera lenses to focus on different things in your photos!

Each English Module teaches you a different method of textual analysis and develops your critical thinking skills. This is why it’s crucial that you are familiar with the different English modules.

Remember, you can maximise your marks if you know exactly what you need to focus on in your texts. This will also help you draft responses that respond to specific questions as opposed to simply memorising and regurgitating a generic essay. This is an essential skill to refine before Year 12.

Bear in mind, not all schools study Othello. Furthermore, the schools that do study it, approach it from different Modules. Different schools will choose to study Othello for different modules. Let’s see the ways your school might study Othello:

Need help with the Modules? We explain the different modules in more detail in our Overview of the Beginner’s Guide to Year 11 English Advanced.

If you want to learn more about the Common Module, take a read of our detailed Guide on the Year 11 Common Module: Reading to Write.

Reading to Write focuses on the human experience and how it is represented in texts.

Human experience are universal experiences, emotions, and ideas experienced by everyone, anytime.

You may notice that human experiences often become major themes in texts.

Here are some questions you should ask yourself to flesh out your analysis of the human experience:

This course also introduces you to critical analysis. This means you will need to do a “close reading” of Othello to find themes and techniques, and develop your analytical skills.

As the name suggests, you are expected to develop your writing skills by reading ‘Othello’.

Your school may ask also ask you to write an imaginative recreation. This is where you write a creative piece inspired by Othello, like a fan-fiction! This task could take the form of a podcast, creative, or drama script.

Here are some things you need to think about when writing a Common Module response:

Before you analyse a key scene, you should answer the following questions holistically.

This will help you better understand the text’s relevance to the Common Module (as seen in the above example). After you’ve done this, you can apply the following questions to a specific key scene to break down its meaning.

Let’s break down Iago’s speech to Brabantio in Act 1, Scene 1:

Zounds, sir, you’re robbed! For shame, put on your gown.
Your heart is burst, you have lost half your soul.
Even now, now, very now, an old black ram
Is tupping your white ewe. Arise, arise,
Awake the snorting citizens with the bell
Or else the devil will make a grandsire of you.
Arise, I say!

1. Does Shakespeare represent themes related to the human experience in Othello?

Yes! There are some human-experience-related themes are explored in this excerpt:

2. Does this text represent your personal experience and/or world issues?

These themes are universal. So, they can apply to you personally, and/or the world today!.

3. What is Shakespeare trying to say about the world? Why is this message important?

Shakespeare warns audiences about the need to overcome racism, and to be critical and search for the truth. We shouldn’t blindly trust people because it can lead to catastrophic or traumatic events.

Module A: Narratives that Shape our World

Module A is all about context and the importance of storytelling.

You will engage in a comparative study of Othello and a later adaptation of that text to flesh out the importance of storytelling in different contexts.

Here are some possible adaptations of Othello:

Each of these adaptations have their own personal take on Othello. You will find that some stick closely to the original, whereas others change it significantly.

Consequently, when you analyse your texts in Mod A, always think about why something is done in a particular way!

If you want to read more about Module A, take a look at our Year 11 English Adv Guide: Module A.

In this module, you will see how Shakespeare’s context – including the historical conditions, social attitudes, and societal values – influences the way he writes his text.

How does his text reflect his societal values? What does he say about it?

You will need to analyse how Shakespeare represents his context in Othello, and compare that to the adaptation’s representation of their own context.

Find similarities and differences and provide an explanation for them!

Here are some things you need to focus on when analysing context in Othello:

For example, if you had to think about Parker’s 1995 adaptation:

We unpack Shakespeare’s context in detail in Part 1 of our Othello Guide: Ultimate Othello Cheatsheet.

Module A: Narratives that Shape Our World also delves into the importance of storytelling in human society.

Humans use storytelling to reflect on themselves as individuals, cultures and nations.

So, you need to examine why Shakespeare and the adaptation’s composer chose to represent things in a certain way.

But don’t confuse stories and narratives!

A story refers to the content of a narrative, including the plot, characters, and settings.

In simple terms, stories can be written in many ways, whereas, a narrative is one particular way a story is expressed.

So, the Othello we read from Shakespeare is a narrative, as it is only told by Shakespeare himself. However, the story of Othello can be retold, as seen in the numerous film adaptations.

This means that when you’re analysing Othello and the adaptation for Mod A, you need to ask yourself:

Let’s consider a specific example to show you how to analyse texts for Module A.

Remember, when you are analysing texts on your own, you should look at the text holistically first, before you dig deeper into key scenes.

1. Identify the context, and text’s purpose/message

Before we go into detail for both of the texts, you need to have a strong understanding of the context. We covered this in the above example.

2. Compare the similarities and differences between the two texts

Let’s compare Iago’s soliloquy in Shakespeare’s Othello (Act 2, Scene 3) and Oliver Parker’s Othello (1995). Here, Iago is claiming that he can’t be a villain because his advice to Cassio and Othello are so good. However, he also says that that argument is one you will hear from a devil: they will put on a heavenly exterior to commit their sins, like he is now.

And what’s he then that says I play the villain?
When this advice is free I give and honest,
Probal to thinking and indeed the course
To win the Moor again? For ’tis most easy
Th’ inclining Desdemona to subdue
In any honest suit. She’s framed as fruitful
As the free elements. And then for her
To win the Moor, were to renounce his baptism,
All seals and symbols of redeemèd sin,
His soul is so enfettered to her love,
That she may make, unmake, do what she list,
Even as her appetite shall play the god
With his weak function. How am I then a villain
To counsel Cassio to this parallel course,
Directly to his good? Divinity of hell!
When devils will the blackest sins put on
They do suggest at first with heavenly shows
As I do now. For whiles this honest fool
Plies Desdemona to repair his fortune
And she for him pleads strongly to the Moor,
I’ll pour this pestilence into his ear:
That she repeals him for her body’s lust.
And by how much she strives to do him good
She shall undo her credit with the Moor.
So will I turn her virtue into pitch
And out of her own goodness make the net
That shall enmesh them all.

Now, let’s create a table of the similarities and differences.

3. Analysis: How does context influence the way things are represented?

As such, although both societies explore the same themes, they have slightly different messages.

Let’s see what the message is, and how it’s portrayed:

Our comprehensive Theory Books and engaging lessons with HSC English experts will help you refine your analysis and writing skills.

Module B: Critical Study of Literature

Module B Critical Study of Literature is all about completing a close reading of the text and evaluating its literary and cultural value.

This is done by examining:

If you like to learn more about Module B: Critical Study of Literature, take a read of our Beginner’s Guide to Year 11 English: Module B, here.

The unity of a text; its coherent use of form and language to produce an integrated whole in terms of meaning and value

In simple terms, textual integrity is determined by 3 main elements:

Critical reception refers to the way the audience responds to the text. Is it discussed in a positive light or negative?

Often, the way an audience responds to the text is an indication of the cultural relevance between the context and the text.

We will show you what you need to look for when you evaluate Othello‘s textual integrity. Remember, you will still need to go through a deeper analysis of the form, structure, and techniques in Othello to show that textual integrity exists.

Eric’s Hacks: Ace Your HSC with Weekly Rhythms and a Reflection Book