In this article, we introduce simple harmonic motion with a detailed overview and practice questions to get your marks moving!

Get your maths Extension 2 marks moving the right way! In this article, we give you an overview and questions to get you started with simple harmonic motion. 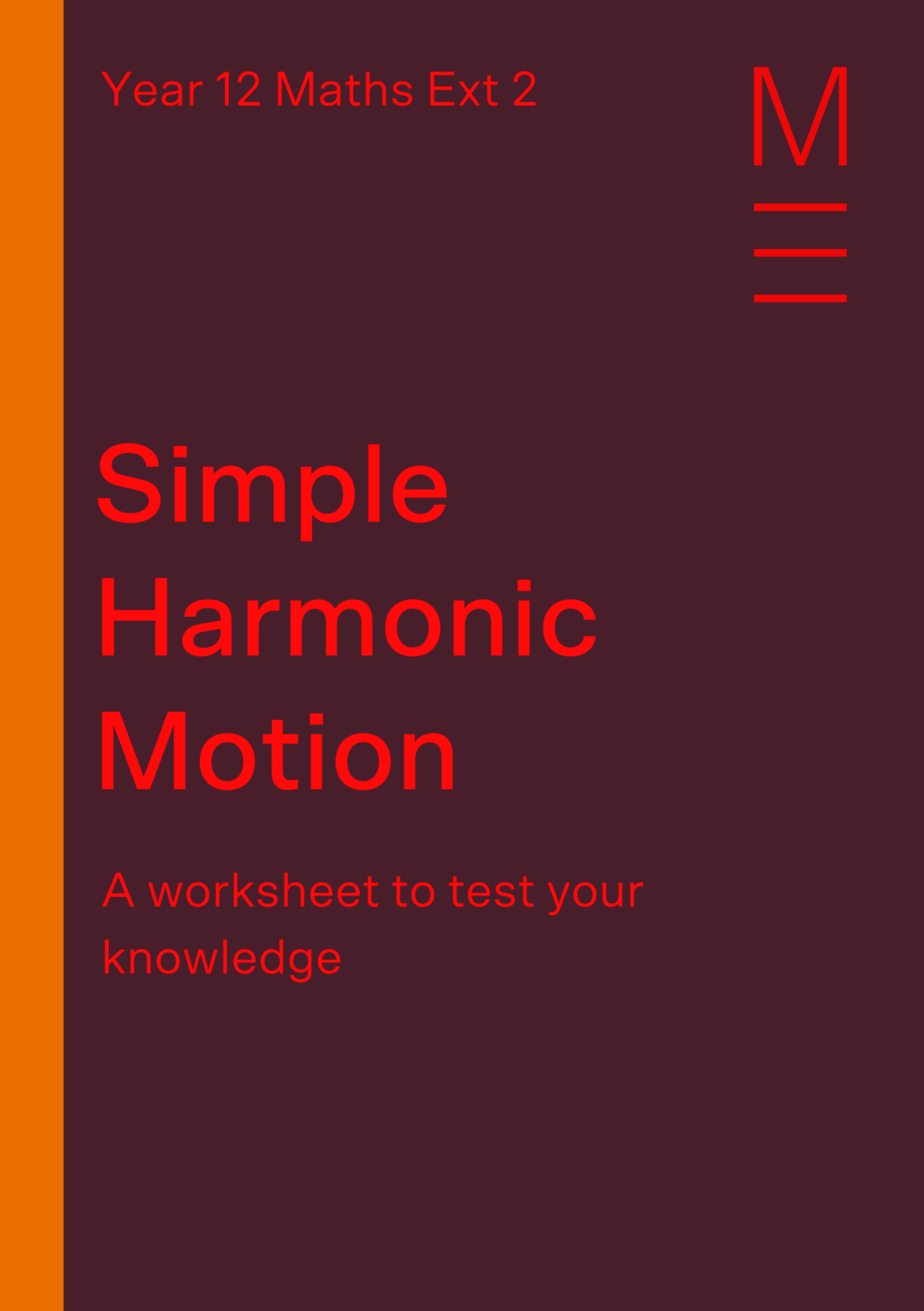 Students should already be familiar with trigonometric functions and their graphs, as well as differentiation and integration.

Students should also understand the mathematical relationship between position, velocity and acceleration.

Simple harmonic motion is a special type of 1 dimensional (straight line) motion, characterised by its acceleration towards and oscillation about an equilibrium point.

SHM is often used in physics, so for the rest of this article, the word particle will be used for the object in motion.

Other examples of SHM include a mass on a spring and the tides in the ocean.

In the above image, the black circle represents the particle, and the white circle the centre of motion (equilibrium point).

The acceleration of the particle is always towards the equilibrium point and is proportional to the distance. Mathematically this is:

Whenever you see an acceleration of this form, you should be thinking SHM!

The solution to this 2nd order equation gives us the motion of the particle:

This should look familiar as it is simply a cosine curve, meaning that the motion of the particle is sinusoidal in nature.

The constants are the same as you would have learnt when studying the trigonometric functions, except now with an added physical meaning.

The constant n is the angular frequency, which relates to the speed of oscillation.

Another quantity which you are likely familiar with is the period, which for SHM is how long it takes for a single oscillation.

So far we’ve only written the SHM equation using cos as it is the most commonly used, but you may also see this motion described using sine or even a combination of both!

Remembering again from your study of trigonometric functions, the sum of a sine and cosine curve is still sinusoidal, so motion of this form will still be simple harmonic.

Currently, we have an equation for the particle’s motion with respect for time, and we can differentiate the expression to determine the velocity and acceleration.

In many situations it is more helpful to consider the velocity of the particle with respect to its position, so another equation is needed.

The equation can simply be applied to a problem, so the derivation below is not necessary knowledge but is helpful in gaining a better understanding of this form of motion.

To start, we rewrite acceleration in the following form:

Which is a useful expression used very often in mechanics! We can now equate this to our SHM equation for acceleration:

Rearranging and integrating again, we end up with:

And we now have an equation for velocity in terms of position! Notice that the integration constant conveniently turns out to be equal to the amplitude squared.

You should be very familiar with maxima/minima problems from your study of calculus, and with finding these maximum values.

Maximum and minimum values for SHM are even easier to determine, as they always occur at specific points.

Depending on the direction of the particle’s motion, the value may be positive or negative, but will have the same magnitude in both directions!

The different directions correspond to either a maximum or a minimum value.

We also have that the velocity is 0 at the points furthest from equilibrium, and acceleration is 0 at the centre.

This zero acceleration is why the centre is called the equilibrium point!

Notice that although there are specific points where these values are zero, they aren’t the minimum value as the particle is travelling in both directions, taking a negative value for half of the motion.

The values of maximum velocity and acceleration can be calculated by differentiating the SHM equation and considering the amplitude:

This simple equation allow the maxima to be determined directly from the motion equation if \(A\) and \(n\) are known.

In some problems you’ll be given the full equation of a particle’s motion, but it is often the case that you need to determine these yourself.

Consider a particle moving in SHM that is initially at the origin with a velocity of 8m/s in the negative \(x\) -direction. The constant \(n\) has a value of 5.

We start with the general form \(x=Acos(5t+α)\), and now need to determine the coefficients.

This is essentially an initial value problem.

Although it is clear from the general form of SHM whether or not a motion equation is simple harmonic nature, some problems will ask you to prove this.

Given the equation \(x=sin(2t)+4cos(2t)\), to prove SHM we need to differentiate twice to determine the acceleration.

Looking at this equation for acceleration, there is a common factor and a negative sign, just like there is in the SHM acceleration!

Graphing simple harmonic motion is as simple as graphing a \(sin/cos\) curve!

The exact same techniques used when studying the graphs of trigonometric functions are applicable here.

Verify that the points shown on the above graph fit with the constants in the equation.

Simple harmonic motion is often used to describe real-world phenomena, so it is important to be able to form the equation from observed information.

A common example used in the HSC course is the tide.

Consider a beach where high tide is 5m, low tide is 1m, and the tide changes from low to high in a 9 hour period.

This may not seem like a lot of information, but from this we can infer a complete SHM equation.

It is extremely important to understand what is happening during SHM in addition to the equations.

The difference between the low and high tide is 4m, and since there must be a central point for SHM, this means that the amplitude is 2.

The central point is simply the point in between each extremity, in this case 3m.

The other quantity to determine is the period.

We have been told that the tide changes from low to high in a 9 hour period, which is equivalent to half a period. High to low and then back to high tide would be a full period.

This is all the information needed to produce an SHM equation!

a) What is the period?

b) What is the maximum velocity?

c) What is the maximum acceleration?

a) Write down an SHM equation describing this motion

Our HSC experts will revise and break down Maths concepts through our structured video lessons, and our mock exam will test your strengths and weaknesses. Learn more about our HSC Prep Course now.