6 Difficult Concepts You Must Know for HSC Biology Exam

In this post, our Science Team explain 6 difficult concepts you must know for the HSC.

Students often get amino acids, polypeptides and proteins confused. It is important to understand these terms in order to understand translation and the experiments of Beadle and Tatum.

Amino acids form the building blocks of the proteins in our body. They are composed of different arrangements of Carbon Hydrogen Oxygen and Nitrogen (CHON). Some amino acids are absorbed from our food (essential) and others need to be synthesised (non-essential).

Recall that amino acids are joined together by peptide bonds during the translation process to form polypeptides.

HSC Biology Concept 2: The Difference Between DNA Replication and Transcription/Translation

Students can get these confused as they both involve unzipping of the DNA in the first stage, but the end products are very different. 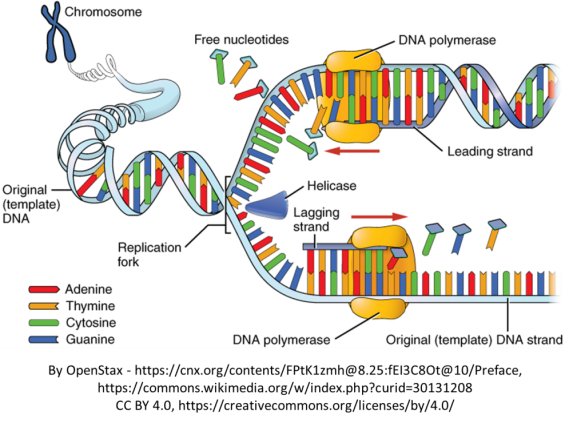 DNA replication only occurs in preparation for cell division (meiosis or mitosis). The DNA is unzipped by helicase, then each half of the DNA strand is used as a template. Complementary nucleotides are added by DNA polymerase and the end product is two identical copies of a chromosome. Transcription and translation (protein synthesis) happens during interphase. Inside the nucleus, DNA is unzipped by helicase, but only at the location of a specific gene. A single strand of complementary mRNA is produced by RNA polymerase and then the mRNA leaves the nucleus. Transcription is complete.

In the cytoplasm a ribosome ‘reads’ the mRNA. tRNA molecules enter the ribosome and drop-off amino acids. The ribosome joins the amino acids together using peptide bonds, the end product is a polypeptide chain.

Remember: all enzymes are proteins, but not all proteins are enzymes!

In order to understand the experiments conducted by Beadle and Tatum, students must recall that enzymes can catalyse reactions to change one product into another.  In this way, they can be used to synthesise new amino acids from existing ones.

At the time, the Arginine synthesis pathway was well understood, but the role of DNA in this pathway was unknown. Beadle and Tatum had a hypothesis that active DNA segments called genes coded for each enzyme.

To test this hypothesis they exposed many samples of the bread mould to radiation in order to cause mutations of its DNA. Different samples of bread mould ended up with different mutations.

This indicated to Beadle and Tatum that the bread mould could synthesise Citruline, but not Arginosuccinate (and therefore not Arginine).  The radiation had caused a mutation on the gene for Enzyme 3 on the Arginine synthesis pathway.

By producing strains of bread mould with different mutations, Beadle and Tatum could repeat the process to identify the gene for each of the four enzymes.

Whole organism cloning typically involves taking an unfertilised egg cell from one individual and removing the nucleus. A nucleus is then taken from a somatic cell (body cell) of a different individual and inserted into the egg cell. The egg is stimulated (to mimic fertilisation) and the egg cell should start to divide and form an embryo.

The embryo is then implanted in a surrogate mother. The resulting offspring will only have physical characteristics of the individual that donated the nucleus, as this is its only source of DNA. The typical example of this is Dolly the sheep. 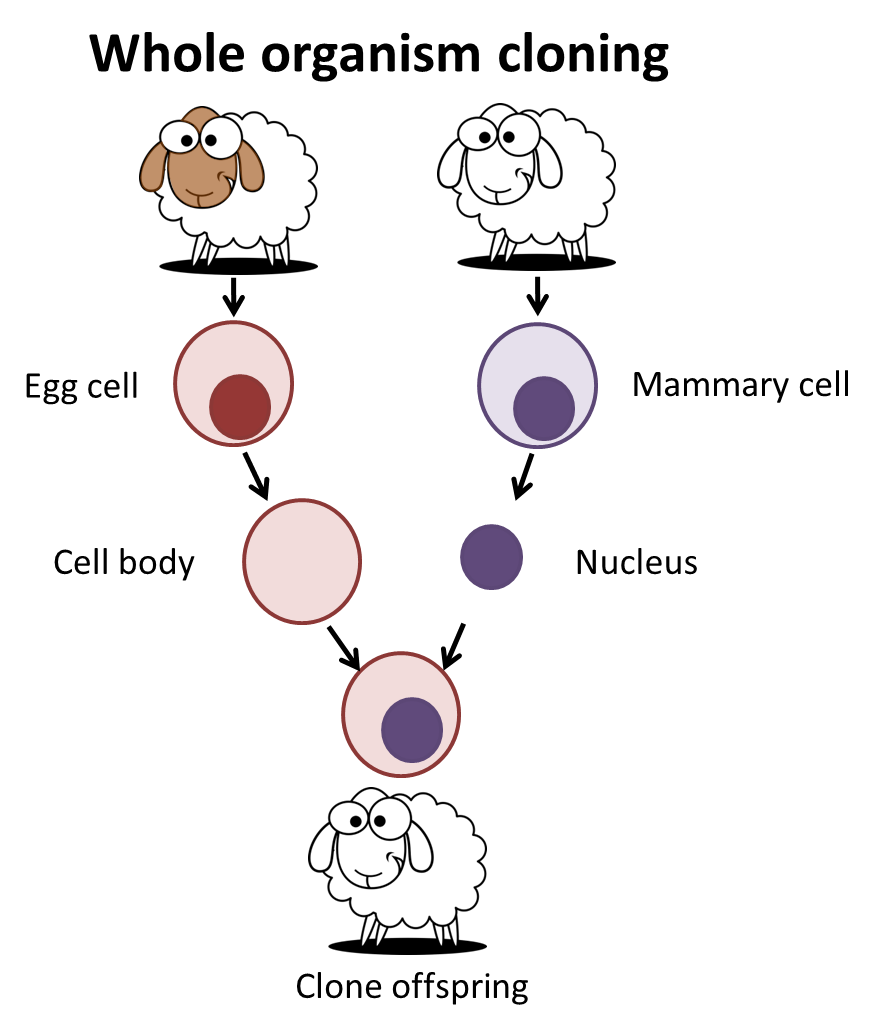 In gene cloning a gene of interest is identified, often on the human genome, and cut out using restriction enzyme. The DNA (plasmid) of a bacterium is then cut open (using restriction enzyme again) and the gene is inserted into the plasmid using DNA ligase. The bacteria is then encouraged to multiply resulting in many copies of the gene of interest.

The gene may be multiplied so it can be inserted into a different organism later (e.g. a plant), or the gene may be expressed by the bacteria (via transcription and translation) so that it produces a useful product (e.g. insulin). Some students forget to include the role of plasmids and bacteria when describing gene cloning. 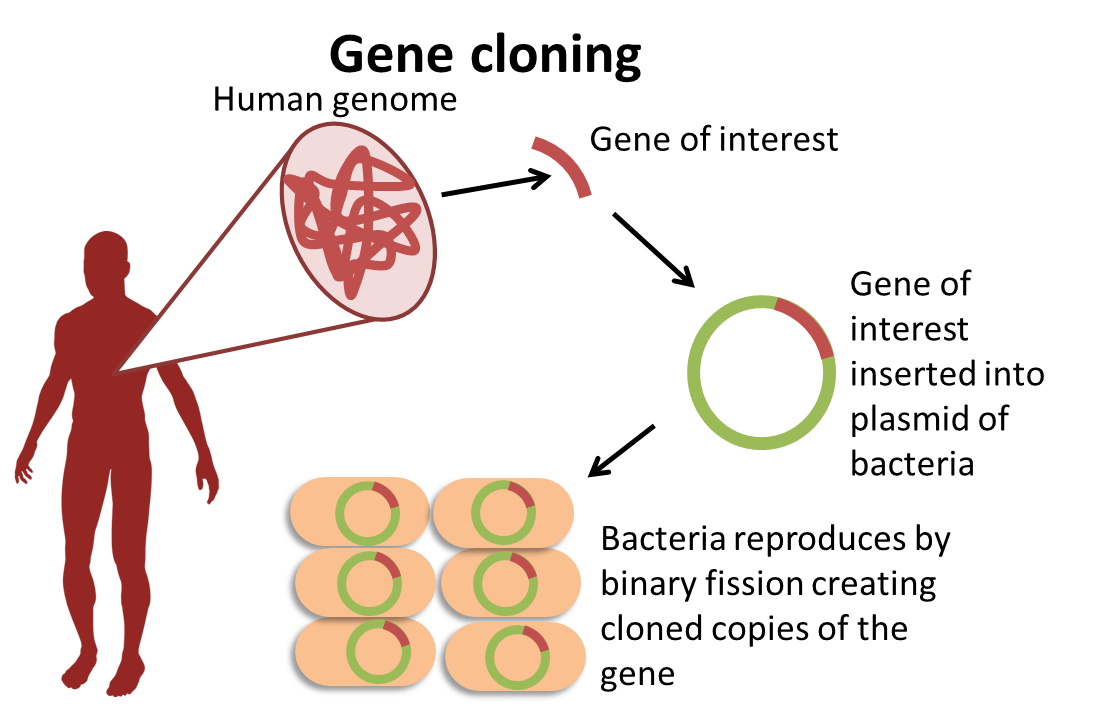 HSC Biology Concept 5: The difference Between Antibodies and Antigens

Antigens are proteins found on the surface of pathogens such as bacteria or viruses that enter the body.

Antibodies are produced by B-Cells and bind to the antigens helping to disable the pathogen and mark it for destruction.

Antibodies are produced by your body, antigens (antibody generators) are from outside of the body! Unfortunately antigens are found on some substances that are not actually pathogens such as pollen or transplanted organs.

Your organs have antigens on their surface. Your immune system recognises these as part of your body and doesn’t launch an immune response against them.

The donated organ will have surface antigens unique to the donor and so the patient’s body recognises these as foreign. The immune system will attack these foreign cells and try to destroy the donated organ. 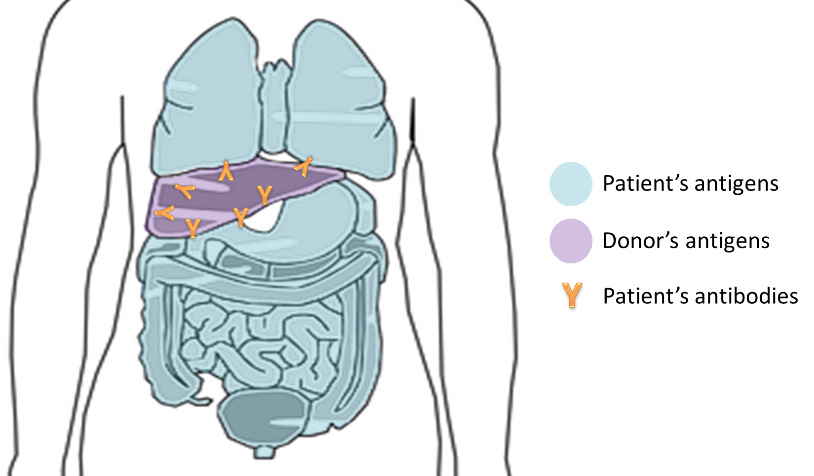 Want to further enhance your understanding of Biology concepts for your HSC exam? At Matrix, we help break down difficult concepts to help develop your knowledge and boost your marks!

All About the Year 12 English Advanced Course at Matrix

Ultimate Guide for How to Answer Common Module Unseen Questions