Are you unsure about the differences between proving congruent and similar triangles? Well, don't worry! In this guide, we will explain everything about similar triangles. We will go through the meaning of similarity, the scale factors and the four tests of similarities in detail.

What’s similarity and why is it important?

Assessing the similarity of shapes is a vital part of geometry, which you will continue to use in mathematics in later years.

However many students find it confusing.

If you could do with brushing up, or even if you’re learning this for the first time, read on to see our tips and tricks for working with similarity problems.

This article deals with the following NESA Syllabus outcomes:

In this article, we look at:

Test your knowledge of Congruency before we get started!

A worksheet to test your Congruency skills and knowledge with questions across 4 levels of difficulty. What does similarity mean?

Similarity arises when shapes are resized, rotated or reflected.

In principle, similar objects must have the same proportions in their shape and size.

They have the same shape, but not necessarily the same size.

For example, when ordering a pizza, there might be small and large size options. Both sizes of the pizza will be “similar” as they are the same, just resized.

Other examples of similar figures include scale models, where the scale model imitates the real-life object, but in much smaller proportions.

What is the scale factor?

A figure and its enlargement are called similar figures.

In similar figures, all corresponding sides are in ratio.

This ratio is called the scale factor.

Also, all corresponding angles are equal.

What is the scale factor for these triangles? 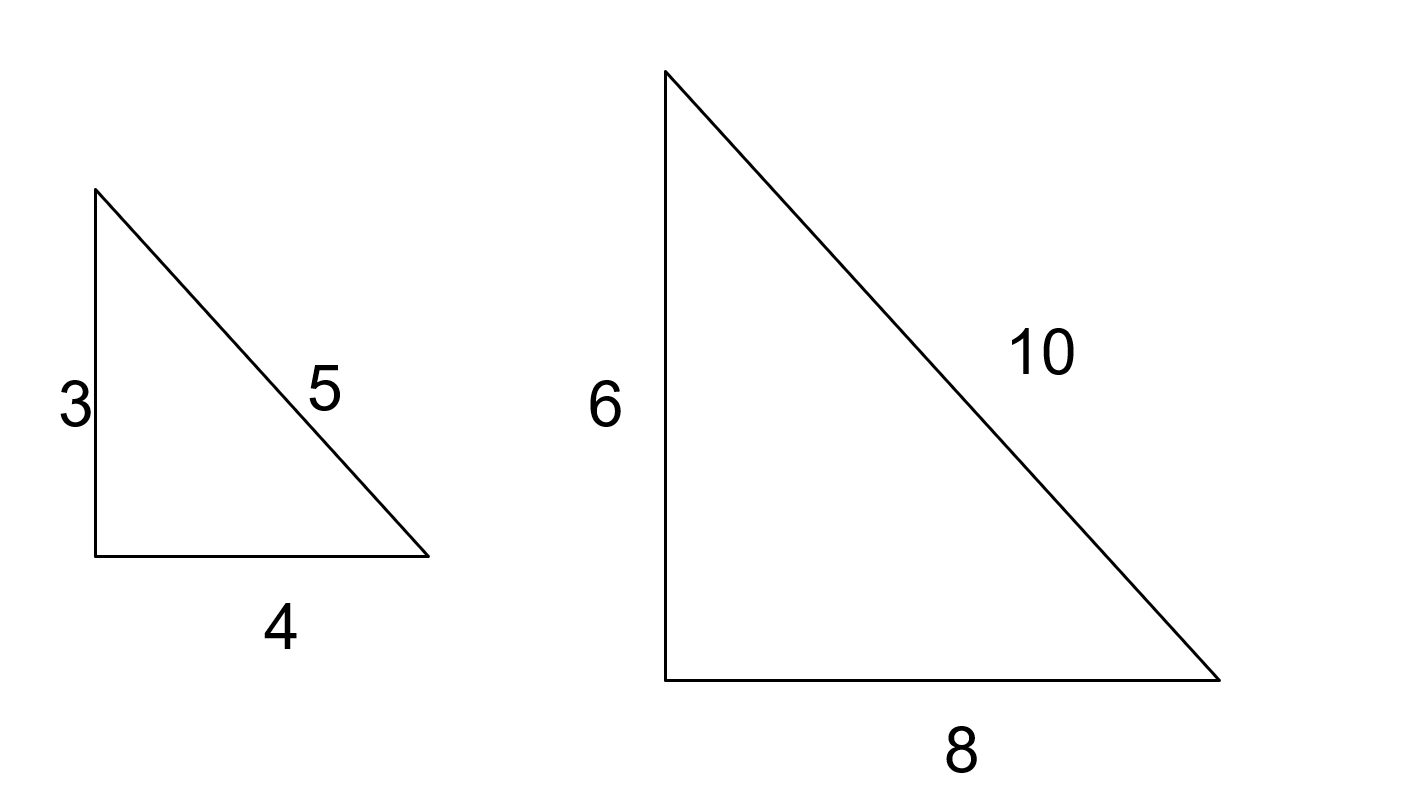 Notice that the corresponding side lengths between the two triangles share the same ratio.

This is an enlargement factor.

Alternatively, the factor can be thought of as \(1:2\) from the larger triangle’s perspective.

In this case, it is a reduction factor.

If all corresponding sides of two shapes are enlarged/reduced by the same ratio, they are similar shapes.

You will need to be able to identify these situations.

The mathematical symbol for “is similar to” is |||. 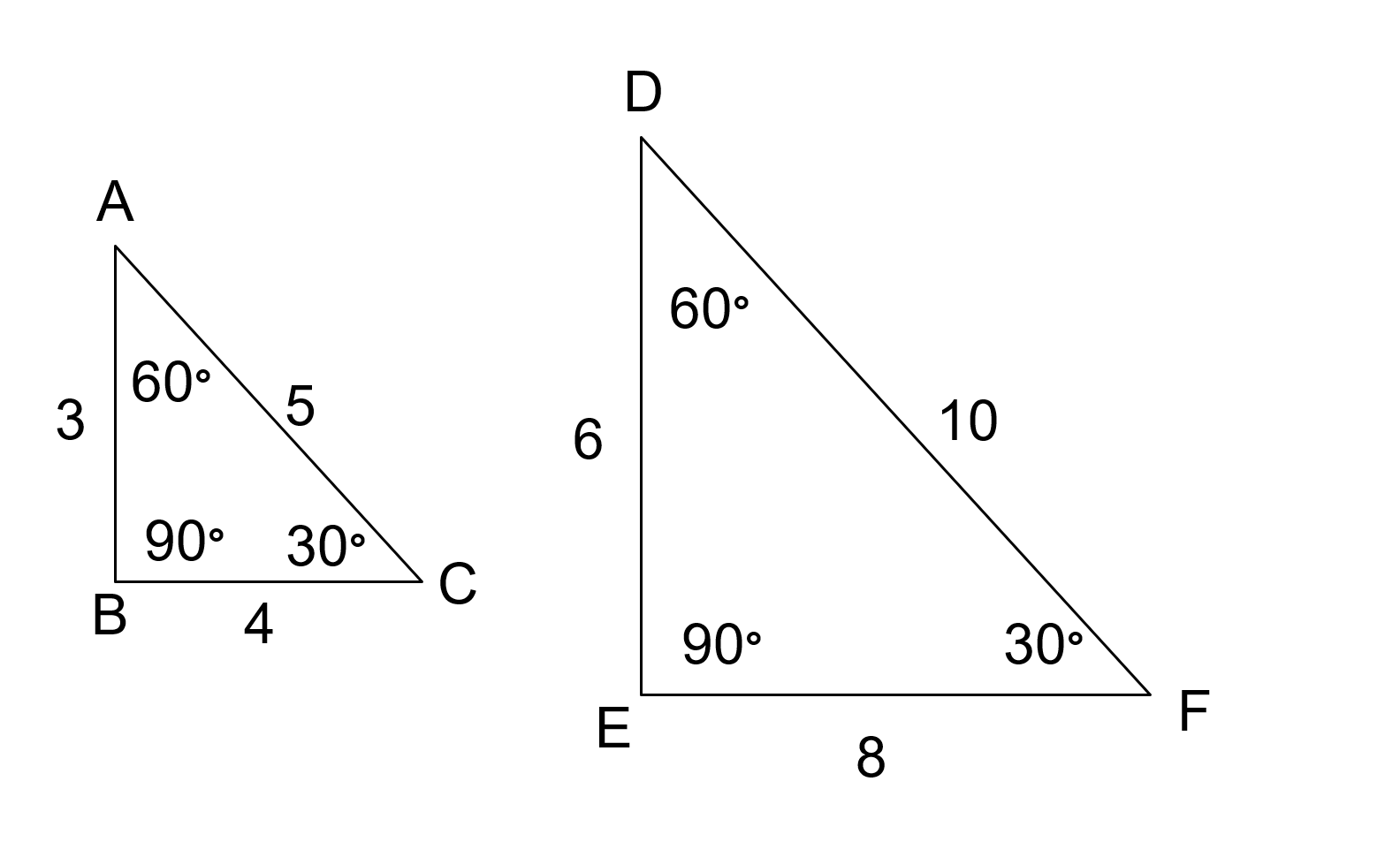 What is the effect of the scale factor on the perimeters and areas of the similar figures?

Let’s investigate the same similar triangles as above.

We can see that the ratio of the perimeters is the same as the scale factor.

Learn about Similarity and other Year 8 Maths topics before it’s taught in school! Learn more about our Year 8 Maths Term Course.

The four tests of similarity

Note: These tests DO NOT have standard abbreviations like the congruency tests.

Check with your school teacher for the best way to notate them.

Why do I need these 4 tests?

Students need to know the four tests, identify when to apply them, and understand their implications for the scale factor.

i.e. A side of one triangle matches with the side of another triangle if the two sides are opposite the same angle.

Test 1: All sides in a ratio

Remember, all matching sides have to be in the same ratio for them to be similar. 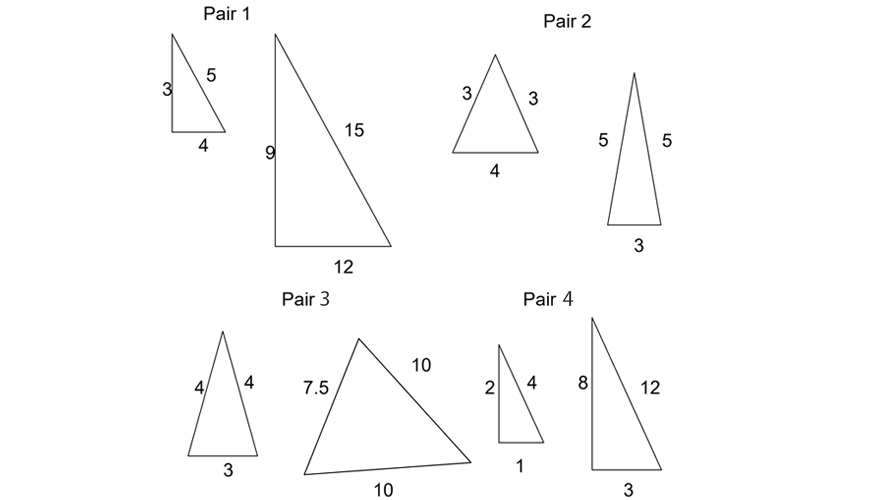 Pair 1 are similar as we can see that all sides in the triangle on the right are \(3\) times the size of the corresponding sides on the left.
i.e. the sides are in a ratio of \(1:3\).

Pair 2 are not similar as we cannot match corresponding sides of the triangles so that all of the sides are in ratio \( (3:5 ≠ 4:3) \)

Think of the angle sum of a triangle.

1. Which of the following pairs of triangles are similar? What is the remaining angle in each triangle? 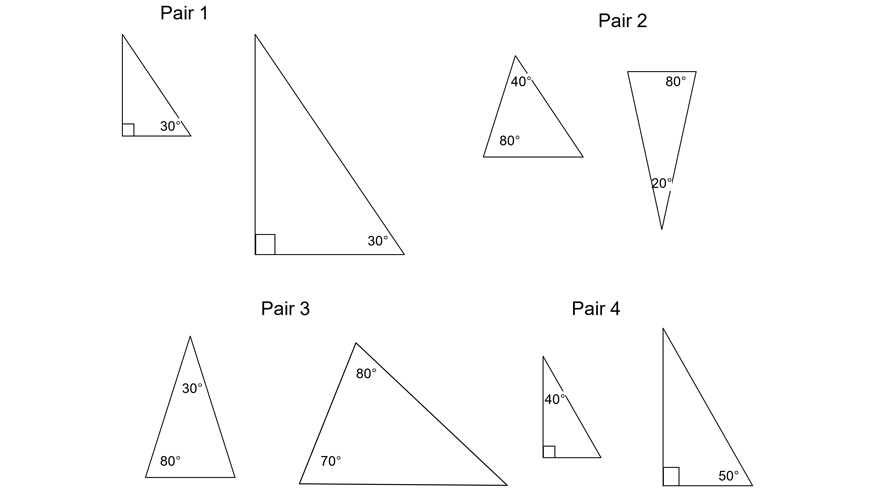 Pair 3 and pair 4 appear to not be similar at first glance since neither have 2 pairs of labelled matching equal angles.

However, in both cases, when we work out the unlabeled angle for one of the triangles we see that it is equal to the labelled angle in the other.

This means that in both pairs of triangles, we can find \(2\) pairs of equal angles.

Two triangles are similar when two pairs of matching sides are in ratio and their included angle is equal. This is because the equal angle is not the included angle.

I.e. It is not between the two sides which are in ratio.

Test 4: Hypotenuse and pair of sides in ratio

Two right-angled triangles are similar when their hypotenuses and another pair of matching sides are in the same ratio. 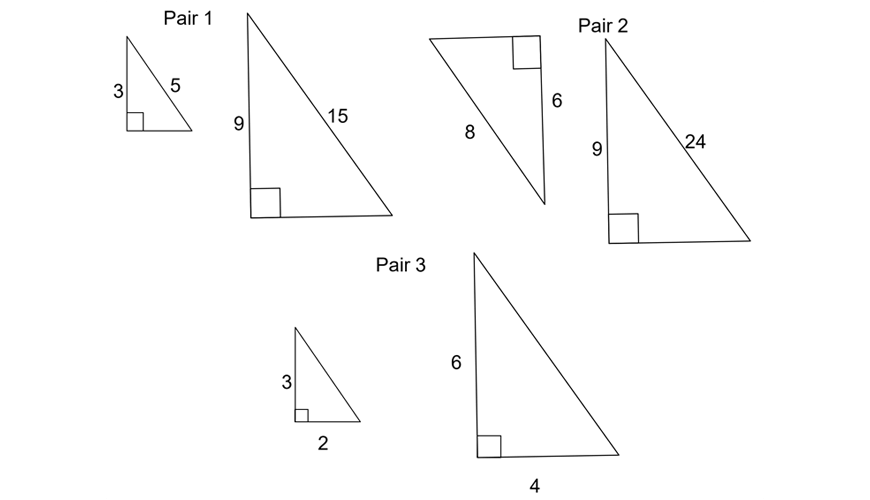 Pair 1 are similar, as these are right-angles triangles and, we can see that the hypotenuses and one other matching pair of sides of the triangles are both in a ratio of \( 1:3 \).

Pair 2 are not similar, despite being right-angled triangles.

Pair 3 are in fact similar. However, there is a catch.

This pair is not an example of test 4, since the hypotenuses are not labelled. This means that we do not know their ratio.

This means that the easiest way to tell these triangles are similar is using test 3.

Note: we could work out the hypotenuses using Pythagoras’ Theorem and then use test 4, but it is simpler to just use test 3.

You may notice ‘similarity’ with these tests and the congruency tests.

A reminder that proving two triangles are congruent implies they’re similar as well, but not necessarily vice versa!

1. What is the scale factor between these two congruent triangles?

4. Prove the triangles are similar. What is the scale factor between them? What is the ratio of their perimeters?

9. Below are two regular hexagons. State why they’re similar.

10. This is a photo of the Eiffel Tower. A photographer used Photoshop to make some effects and edits. The photographer zoomed in on the photo (see image on the right).

He found that the Eiffel Tower now took up \(4\) times more area on his screen. How much did he zoom in by?

We just need one more angle for them to be similar.

∴ The triangles are similar (equiangular).

7. It will be more helpful to visualise the cone in 2D like this.

The water and the radius of the conical flask are parallel.

So, similar to in Question 5, similar triangles can be shown to have formed.

9. They are similar because they’re both regular polygons.

This means all their angles and sides are the same.

Hence, since they’re equiangular and their sides must all be in the same ratio with each other, they’re similar.

Similarity can be thought of what happens when you stretch out an object (keeping the same proportions), like you would when you enlarge a photo (or zooming out!).