Don't leave your Extension 1 maths to chance, read this guide to make an E4 an odds on favourite!

Feel like the odds are stacked against for Year 11 Extension 1 Probability? In this article, we will address all the key syllabus points for Year 11 Maths Ext 1 Probability so you don’t leave your marks to chance! 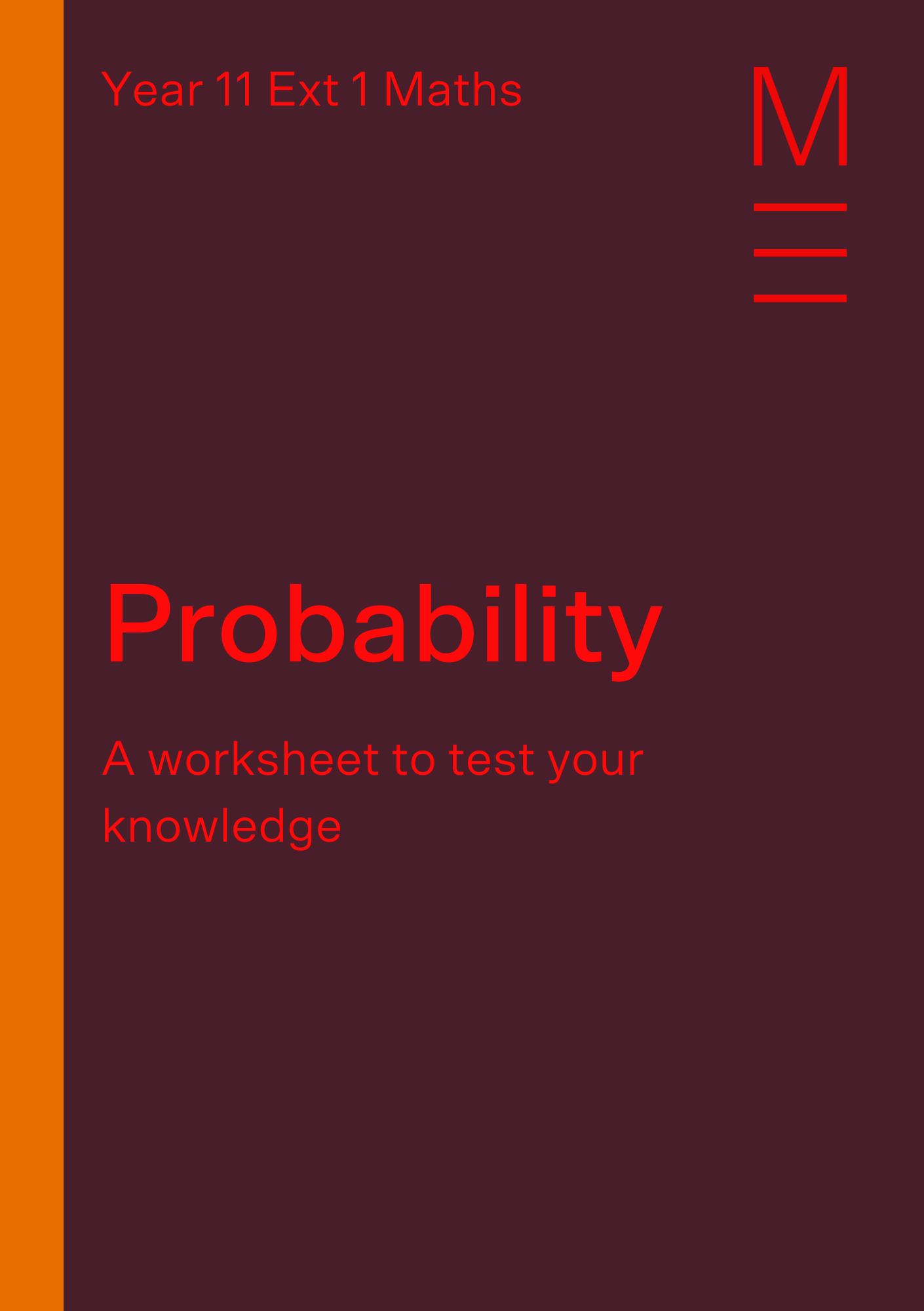 This free worksheet has 4 levels of difficulty to assess your knowledge and skills.

Probability and Statistics is extensively used in mathematics, statistics, finance, science, artificial intelligence and many more areas of study.

Surprisingly, the topic that underpins hard probability problems is an area of Mathematics called combinatorics (meaning counting!) Indeed, as probabilities are the ratios of the number of ways an event can happen to the total number of possibilities, the step is to develop a theory of counting.

We are going to look at the following NESA syllabus points.

NESA dictates that students need to learn the following concepts to demonstrate proficiency in Probability and Statistics.

Combinatorics (also known as enumeration) is the study of counting. It sounds deceivingly simple; however, it is independently very difficult and also the foundation behind probability.Before we begin, it will be very useful to understand:

The following notation will be used extensively:

Combinations is about unordered selections. It counts the number of ways you can choose \(k\) objects out of \(n\) if order does not matter. This could be choosing players to be in a football team, or choosing members to be in a committee, or choosing cards from a pack of cards.

This is an unordered selection without replacement. There are \({30 \choose 10}\) ways to do this.

Many counting problems, however, involve multiple steps (or decisions). To find the total number of possibilities in such multi-stage processes we need something called the multiplication principle.

And this can be easily generalised to any number of decisions;

This is in contrast to combinations, where order did not matter.

How many different possibilities of breakfast, lunch and dinner meal plans can he have?

Hence, by the multiplication principle, there are

possibilities he can have on that day.

There are three special cases of the multiplication principle:

We will see each case one at a time.

Suppose that three friends, Adam (A), Betty (B) and Charles (C), line up for a bus. In how many different ways can this be done?

If we simply list out all the cases, we can see there would be six possibilities:

Then, by the multiplication principle, there are

ways to arrange the three people in a line, as we manually listed above.

Note: You do not need to write out the decisions for the multiplication principle each time. You can immediately write \(3!\) as your final answer.

Hence, by the multiplication principle, there are in total:

The number of arrangements would not simply be \(4!\) like before. Because some permutations actually lead to the same arrangement! For example:

would be counted in \(4!\) as a different arrangement, but actually, it’s the same! It is just a \(90\)-degree rotation of the first table. How do we avoid this?

We have to fix one of the people and then change the ordering of the rest of the people. So, for example, in the first image if we fix \(A\) in that position and rearrange the remaining three people, there are \(3!\) Ways of doing this.

This is an ordered selection without replacement.

Hence, by the multiplication principle, there are

possible codes you can make.

Note: You do not need to write out the decisions for the multiplication principle each time. You can immediately write \({9 \choose 4}×4!\) as your final answer.

The pigeonhole principle is another concept which seems quite simple and obvious. However, as you will see in questions, it can be used to prove highly non-trivial and unexpected results.

A dinner party is held with \(27\) guests. Prove that there must be at least two guests whose first names start with the same letter.

There are \(26\) possibilities for what the first letter for each guest could be. As there are \(27\) guests, we can define:

At the same dinner party with \(27\) guests, some of the guests shake hands when they meet. Use the pigeonhole principle to show that there is a pair of guests who shake hands with the same number of people.

There are \(27\) guests (pigeons) and \(27\) possibilities (pigeonholes) for the number of handshakes each guest could have had – the pigeonhole principle is not yet applicable (we need \(2\)6 pigeonholes)!

We can form two cases based on whether or not everyone has shaken hands with at least one other guest.

Case 1: If everyone has shaken hands with at least one other guest, then there cannot be a guest with \(0\) handshakes. Hence, the \(26\) possible number of handshakes (pigeonholes) for each guest is \(\{{1,2,…,26}\}\) and there are \(27\) guests (pigeons), so by the pigeonhole principle, there must be at least two guests with the same number of handshakes.

Case 2: If not everyone has shaken hands with at least one other guest, then there cannot be guest with \(26\) handshakes. Hence, the \(26\) possible number of handshakes (pigeonholes) for each guest is \(\{{0,1,2,…,25}\}\) and there are \(27\) guests (pigeons), so by the pigeonhole principle, there must be at least two guests with the same number of handshakes.

Hence, in any case, there must be at least two guests with the same number of handshakes.

Let the \(16\) contestants be the pigeons and the \(3\) teams by the pigeonholes. Then immediately, by the generalised pigeonhole principle, there must be at least \(\frac{16}{3}=5.33\) or equivalently (rounding up) \(6\) contestants in at least one team.

The binomial theorem is an efficient method of expanding out all the higher powers of an expression in the form of \((a+b)^n\) for arbitrary values of \(a,b\) and \(n\). Learning how to conduct binomial expansion quickly is essential as it acts as a foundation to subsequent extension \(1\) theory in topics such as binomial identities.

Suppose we wanted to expand out \((a+b)^4\). To do so, we can undertake a very tedious method of expanding to get our answer:

It turns out that the value of the coefficients of our expansion can be quickly determined by drawing up Pascal’s Triangle. Every number in Pascal’s triangle is the sum of the two numbers above to the right and left. The outer numbers of the Pascal’s triangle are always \(1\).

Write down the powers of a and b for each term, with the powers of a decreasing and power of b increasing. You must ensure that the sum of these powers is always \(n\).If we go back and look at the previous example where we expanded \((a+b)^4\), we can quickly see that the coefficients of our expansion correspond to the 5th line of Pascal’s triangle (i.e. \(1, 4, 6, 4,1\)). This is true in general for \((a+b)^n\) where we can obtain the coefficients of our expansion as the \((n+1)\)th line of Pascal’s Triangle. Hence, our method of expanding is as follows:

Then, use Pascal’s triangle to determine the coefficients of each term. Remember that the order we assign these coefficients matter!

We note here that the coefficients of our expansion should correspond to the fourth line of Pascal’s triangle (\(1, 3, 3, 1\)). Hence, we can write out the expansion as follows:

As we can see here, using the Pascal’s Triangle has dramatically reduced the time it takes to undertake binomial expansion. But is there a quicker way?

This gives us the generalised Binomial Expansion formula:

Using our generalised Binomial Expansion formula above, it is apparent that we can determine the \((k+1)\)th term:

So, the 5th term of the expansion is:

Using the binomial theorem to find coefficients of specific terms:

Suppose we wanted to find the coefficient of a particular term in our expansion. The following 3-step procedure can be utilised:

Step 3: Write down the coefficient of \(x\) by substituting the value of \(k\)

Step 3: Write down the coefficient of \(x\) by substituting the value of \(k\)

Take the chance out of your Extension 1 results

The Matrix Maths Extension 1 course will teach all the syllabus requirements so your marks aren’t just a spin of the wheel. Learn more!

The Beginner's Guide To Poetry

How To Write An Essay: Overview | Essay Writing Series