In this article, we give you the run-down on projectile motion so you can launch your Maths marks!

Do you need to get your Extension 1 Maths marks on the right trajectory? This guide on Projectile Motion for Extension 1 will help you change the path of your marks!

Get more practice with a range of Projectile Motion questions! 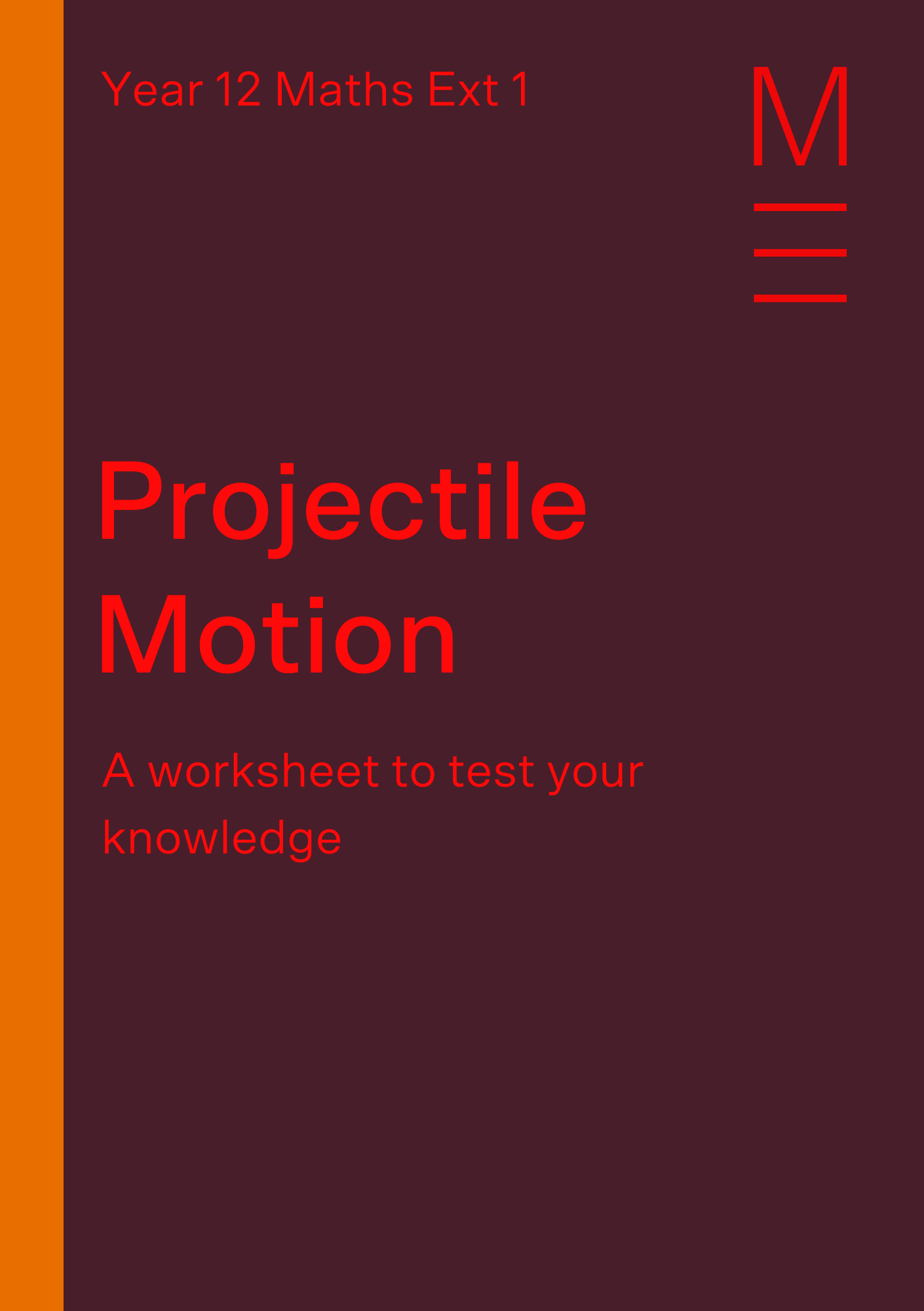 The motion or mechanics of projectiles has been a human concern since the first man threw a rock. The first accurate description of projectile motion was made by Galileo, who broke down motion into separate horizontal and vertical components. This revolutionary insight is what we will be investigating in this blog.

Students are assumed to have a basic understanding of quadratics, trigonometry, calculus and vectors. This includes the topics of differentiation, integration, rates of change and motion in a line. Students should also be familiar with vector notation and the vector concepts of direction and magnitude.

A projectile is any object that moves through the air and is subject to only a single force, gravity. This means that self-propelled objects such as rockets or buoyant objects like balloons are not considered to be projectiles. For Extension 1, projectiles are represented as points and the effects of air resistance are also assumed to be negligible. Under these simplifications, a projectile’s trajectory can be plotted on a Cartesian plane as a parabola.

We may decompose projectile motion into both horizontal and vertical components that are parametric in terms of \(t\).

Hugh throws a stone into the air with an initial speed of \(8ms^{-1}\) at an angle of elevation of \(60°\). Determine the horizontal and vertical components of the stone’s initial velocity.

From the definition of projectile motion, we assume that the only force acting on a projectile is the downwards force of gravity. We encapsulate this as

Recall that the acceleration, velocity and displacement of an object have the following relationships.

George fires a gun directly upwards. Assume that there is no wind so that the bullet has no horizontal displacement. The bullet escapes the chamber at a speed of \(600ms^{-1}\). If George fires the gun at a height of \(2.2m\) from the ground, find the equation for the height of the bullet as a function of time \(t\). You may assume that the acceleration due to gravity is \(10ms^{-2}\).

Now we focus on the horizontal component. Since the only the force on a projectile is gravity, then there are no forces acting horizontally. That is, our horizontal acceleration is

Again, the acceleration, velocity and displacement of an object has the following relationships.

A projectile is always assumed to be initially positioned at the origin, unless suggested otherwise by the question.

A trebuchet is stationed \(300m\) away from a castle wall. When fired, it launches a stone with a speed of \(56m/s\) at an angle of elevation of \(55°\). Given that the stone collides with the castle wall, determine how long it takes for the castle wall to be destroyed from the moment that a trebuchet is fired.

The motion of a projectile can be represented by vectors in two dimensions. Vectors can be used to quantify the acceleration, velocity and displacement of a projectile flying through the air.
The definitions of the unit vectors \(i= \binom{1}{0}\), \(j= \binom{0}{1}\) will be useful for the following equations.

Projection motion questions will usually ask for some property such as the projectile’s maximum height, time of flight or horizontal range. It is up to you to interpret and calculate these quantities from our horizontal and vertical decompositions.

(a) Find the velocity vector for the tennis ball.

(b) Find the position vector for the tennis ball.

(c) Determine the maximum height reached by the tennis ball.

(d) How far did the ball land from Ella’s position?

(a) Find the velocity vector of the ball.

(b) Find the displacement vector of the ball.

(c) How long did the ball take to strike the ground?

(d) How far from the base of the balcony did the ball strike the ground?

(a) Find the velocity vector of the javelin.

(b) Find the displacement vector of the javelin.

(c) Determine the maximum height that the javelin achieves.

(d) Find the Cartesian equation for the trajectory of the javelin.

Projectile your skills to Math success

At Matrix, our HSC experts guide you through all Maths Ext 1 concepts. You also receive comprehensive resources with countless of practice questions to help refine your skills. Learn more now!

Expert teachers, weekly quizzes, one-to-one help! Learn at your own pace, wherever you are.