Not sure what a discursive essay looks like? Read an exemplar response and then download the annotated version to learn what it does well and what it could do better.

What is a discursive essay?

Why is the discursive essay important?

Discursive responses have been added to the HSC from 2019. Many students haven’t written in this form before and therefore most are likely to struggle with it.

This exemplary discursive essay was written by Sydney Girls’ High Student, Eesha Singh. In this discursive response, Eesha explores the effectiveness of an advertising campaign presented as a stimulus.

The 2016 Calvin Klein campaign involved Justin Bieber, a statue of Aphrodite and the word ‘flaunt.’ However, I was drawn to the words ‘#mycalvins.’ Justin Bieber is a famous Canadian singer and a favourite of people all over the world. Using him in their campaign allowed Calvin Klein to reach millions of people across the world. But, just using Bieber wouldn’t inspire people to go out and spend their money on some underwear. I believe that is the reason they used the words ‘mycalvins,’ using ethos to appeal to consumers emotions. By using the word ‘my’ in conjunction with Bieber they gave people a feeling of relatability, making them believe that they were the same as Justin Bieber and he wasn’t a god but instead a human being, just like them.

The rise of social media hasn’t been recent but it has been gradual and has also let fans of celebrities, actors, singers, beauty bloggers etc. into their lives. It allows famous people to connect with their fans without using the tabloids. Through social media, such celebrities showcase the multitude of endorsements that they are a part of and allow their fans to, seemingly, see what they like. The effect of using celebrities? People who have fans? Such fans will notice that the person they look up to, or adore, are using a product or wearing a certain brand and go out and buy the product. This is how social media influencing works. We see celebrities release perfumes, clothing collections, maybe even a type of drink and the second we see their name on it, we think, wow they must love it, and they created it so it must be good: I need to have it! And, thus, a vicious cycle is created. And the same is applied to campaigns. If we see someone we love on a poster, well now I want what they do, wear what they wear. Now, combine this concept with ethos and you have a power duet. The visual version of this is the 2016 Calvin Klein campaign. We have Justin Bieber, a favourite to millions, maybe billions, and we have the words ‘mycalvins.’ People feel that they can relate to this, relate to Justin Bieber, a millionaire, a famous singer, and they want to relate to him. Because if they can relate to him, then maybe, they can be him.

I know that I was also easily influenced by social media and beauty bloggers. As of recently, I went out and purchased a bottle of Black Opium perfume as a beauty blogger that I love to watch recommended it and said she loved it. Now, if it wasn’t for her I wouldn’t have purchased this perfume or even looked at it. This is the direction that the beauty community is currently heading in. Beauty gurus on Instagram and Youtube are sent packages by makeup brands for them to try and feature on their channels so that their followers will see that they are good and will hence, purchase them. However, if a beauty guru doesn’t like a product and gives the makeup brand a bad review, customers will most likely not purchase the product. A recent example? Jaclyn Hill’s review on Kylie Jenner X Kris Jenner’s makeup collection. She gave them a bad review and, so, the collection flopped and there were limited sales. Here we can see the extent to which one person’s opinion can ruin a collection. However, the opposite is true too, and that is present in the 2016 Calvin Klein campaign. It didn’t just involve Justin Bieber, they also had Bella Hadid, a model, Julian Schneyder, a martial artist, Margot Robbie, an actress and Fetty Wap, a rapper. By doing this they reached out to different types of people who didn’t wear Calvin Klein and that they too should purchase some Calvin’s because all these people loved theirs and wore them to do even the most mundane of things.

Only a year before this campaign, Calvin Klein were still oversexualising their models, including Justin Bieber. Now personally, I didn’t feel that I could relate to this campaign and therefore never had much interest in Calvin Klein. But the fun and carefree campaign of 2016 changed my mind. I could relate to the different things these people were doing and I liked that I could. Especially Justin Bieber. He no longer seemed like an oversexualised god but more like a, sort of, humble human being. And the same could be said for the models and actresses and everyone else. They no longer seemed like a higher power, like a dream of what I could be one day. No, they seemed relatable, as if they were just like me. And that, I feel, is the words ‘mycalvins’ using ethos to change my mind, to make me feel a certain way.

Calvin Klein had such a success with the #mycalvins campaign that they’ve kept it going till 2018. However this year they incorporated a new theme – family. They used the Kardashians and opened up a whole new avenue for them to explore. It helped that two of them were pregnant. But this year’s campaign showed people that Calvin Klein’s are for everyone no matter what age, body type or gender. And that is an important concept for such a massive brand like Calvin Klein to explore, especially now with the rise in equality for all and the fairness for all initiatives trending all over social media.

Calvin Klein have come a long way from 2015 to now. They moved on from oversexualising their models to creating a relatable campaign for customers to look at with #mycalvins and created a new way to market products. But they didn’t stop growing there. They’ve continued to explore what is important to society today and showed that by introducing family and the acceptance of all in their latest campaign with the Kardashian family. Calvin Klein know what people want and know how to showcase their products in such a way to attract positive attention and this plays a part in their exponential rise in popularity, hence leading to millions buying their products. And yet, it all started with just Justin Bieber, a statue of Aphrodite and the word ‘flaunt.’

Is this a perfect discursive essay?

Is anything ever perfect? Arguably not. But this is close. It is is a great response, but it could do some things better.

If you want to find out what makes this an excellent response and how to improve on excellence, download our annotated version of this discursive essay. We’ve included detailed comments about what rocks and what could be stronger so you can slay your discursive essays. Download now! 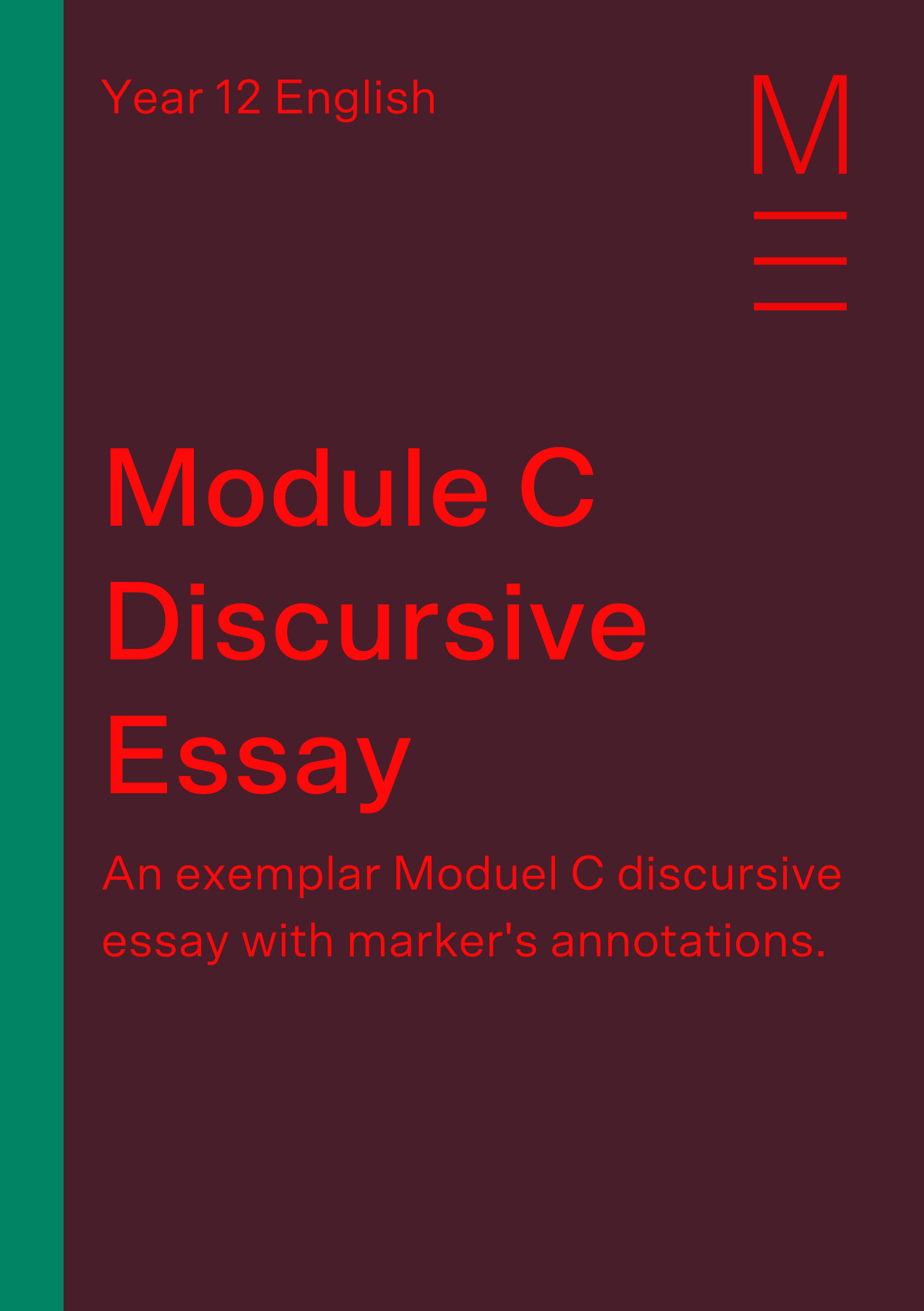 Transferring to a Selective High School in Year 11

Martina’s Hacks: How I Went From Ranked 48th to 1st in Chemistry

How to Survive HSC English Paper 1: Acing the Creative Writing